Both Republicans and Democrats Are Endangering the Two-Party System 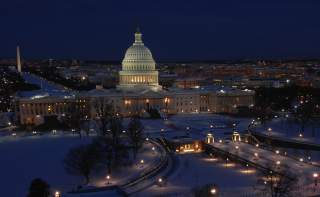 The victory of Donald J. Trump over the standard-bearer for political convention in the United States, Hillary Clinton, shocked the majority of the polls, pundits and so-called political experts. It shouldn’t have. The fact that it did reveals the widening disconnect in the United States—not between the rich and poor, white and black, religious and irreligious—but between the political elite and the rest of the nation. The leaders of the Democratic and Republican parties ignore this fact to their detriment—or ultimately into the ranks of derelict political parties like the Whigs.

Many of the most mainstream polling firms and major political experts had confidently predicted a Clinton victory, some suggesting she had a 93 percent chance of victory. Up until sunrise on November 8, these predictions didn’t appear unreasonable. Consider the following:

Clinton had the backing of American intelligentsia, the bulk of the major media and the opinion makers in Hollywood, and swamped Trump in raising cash by an almost unprecedented two-to-one margin. In the days leading up to the election, Trump had lost the backing of major GOP leaders; many other party leaders refused to endorse or campaign for him. Trump did almost everything imaginable to lose the election.

He demeaned women, debased Islam, insulted Hispanics and blacks, ignored and sparred with Republican leadership, and disrespected the parents of a service member who had been killed in combat. He was reviled by the Hollywood elite, made positive comments about various global dictators, and other than holding a strong position on partial-birth abortion, did not cater to the religious right. Politico magazine captured the spirit of the negatives Trump embraced that are normally fatal to presidential candidates.

“Time and again, Trump poured gasoline on himself and lit a match,” the magazine assessed. “Time and again, pundits predicted fatal self-immolation. Instead, Trump often rode the ensuing firestorm like an Atlas rocket. His poll numbers actually went up after he insulted John McCain’s war record.” Ultimately, Trump didn’t win because of the mistakes he made or the policies he advocated. He won both the Republican primary and the general election because of who he wasn’t: a status-quo, conventional candidate.

How could Trump have won despite so many blunders? Clinton had an advantage in virtually every category that historically indicates the winner. She should have won by a landslide, both in the general and electoral college. But all her advantages proved to be insufficient. Early indications are that the Republicans are feeling good about themselves heading into January, as they’ll have control of the White House, the Senate and the House. They shouldn’t.

In fact, the leadership of both the Republican and Democratic parties should feel vulnerable and a healthy sense of crisis. Whether it’s been a nonstop series of wars abroad that the public doesn’t see the need for, the Affordable Care Act that was forced on Americans whether they wanted it or not, or a Supreme Court that continues legislating from the bench, the American public’s toleration of status-quo Washington finally reached a tipping point on November 8. If the GOP and Dems want to continue being the only players in the bipolar world of Washington politics, they are going to have to make substantial changes.

The GOP was given ample warning during the primary season that the party suffered from a serious disconnect from its base. Jeb Bush had almost as many advantages in the GOP primary as Clinton on the Democrat side. Yet he was one of the first to fall. While the Republican Party leadership didn’t initially pick a winner, they did make clear their preferred loser: Donald J. Trump.

They put a great deal of energy into discrediting Trump and eventually threw their full weight behind the last conventional candidate standing, Ted Cruz. Trump nevertheless crushed Cruz. The Democrats had a similar problem, but saw it manifest itself in a different way.

As recently as October 2014, Clinton was leading all challengers for the party’s nomination by 64 percent to 15 percent over her then-closest competitor, Joe Biden (Sanders had only 4 percent at the time). Many believed the race for the Democratic nominee to have been already decided. By standard campaign convention, there was no reason why major donors would put money behind any other candidates, since none had a chance. And in any event, it made more sense to solidify the party base and then focus on expanding Clinton’s brand among independents and even dissatisfied Republicans. But that’s not what happened.

Instead, Bernie Sanders came out of nowhere. As the primaries got closer, the race tightened. As we now know from Wikileaks, the Democratic party sought to marginalize Sanders and shore up support for Clinton, much like the GOP tried to marginalize Trump in lieu of traditional party candidates like Cruz. Given how far behind Sanders started, it was amazing that he came as close as he did, notching several major primary wins.

In the general campaign, the Democrats did finally coalesce behind Clinton. On the Republican side, however, there was tepid and slow support for Trump, and significantly, there were several major GOP figures that actually said they would support Clinton. It seemed like Washington’s party elite, foreign-policy elite and financial elite all decided it would be better if conventional candidate Clinton won over the unconventional, uncontrollable Trump. Convention lost. But why?

Why were so many Americans sick of politics as usual? Why did the Democratic base rebel and almost elect Sanders over the highly experienced Clinton, and why did the Republican base convincingly reject the whole raft of conventional GOP candidates? And, most especially, why then in the general election did Americans of all political backgrounds rebuff the most practiced, best funded and deeply established candidate? In a word: deafness. Both major parties ignored the communicated will of their base, and they paid for it at the polls.

What, then, is to be done if the machines of the Dems and GOP are to regain control of their reeling ships? First, they are going to have to humble themselves and accept that the people actually do matter.

The Party of Lincoln will have stop lecturing the rank and file, as though they were intellectually inferior to Republican leadership. Republican members outside of Washington believe the wealthy elite have too much influence, want effective immigration reform, want smaller and more effective governance, and an effective tax plan that doesn’t burden small business yet also doesn’t enrich the already wealthy elite.

Leaders of the Democratic Party, likewise, are going to have to evolve their policies and change some elements of the platforms if they are to regain the confidence of lifelong supporters and attract those of the rising generation. That means reducing the influence of Wall Street on government policies, making party elites more accountable to the rank and file, holding more consistently liberal views, and seeing greater movement towards genuine racial equality—and did I mention free or significantly reduced college education for the rising generations?

All Americans want to see a political class that is willing to make reasonable compromise when necessary for important legislation, they want to see the influence of money be reduced substantially, and they want men and women in high office that can simply govern.

The party that fails to acknowledge these trends and doesn’t make substantive changes can expect their base support to continue eroding. If the winners of 2016 in the House and Senate continue their obstructive ways on the Hill—if they continue to view the people as inconsequential, and continue to cater to major media, party and financial elite—they may soon find themselves fueling their own Whig-like demise, via the rise of viable third parties.

Since the mid-nineteenth century, American politics has been the near-exclusive domain of a two-party system. Other than spiked support for Independent Party candidate George Wallace in 1968 and Ross Perot in 1992, no third party has gained viable support. Americans have heretofore concluded that however much they may not have liked the political climate, they always viewed the existing two party system as still representing the best chance of correcting what ails the country. Evidence indicates that is no longer true.

Prior to the election, a Gallup Poll found a substantial majority of Americans (57 percent) said America needs a major third party; the highest percentage ever recorded during a presidential election year. Let there be no doubt in the minds of any RNC or DNC leader: Americans fired a major shot across the bow of American politics with the election of Donald Trump, declaring authoritatively their support and votes can no longer be taken for granted. The next shot might be through the bow.

It is incumbent on Democrat and Republican leaders to take immediate triage to repair the disconnect with their bases if they wish to retain their status as the only two players in U.S. politics. Failing that, it will be up to nonelite, creative and passionate Americans to form new parties on whatever level—local, state, or national—that resonates with the public.