Brexit is Bad News for The EU—Not Britain 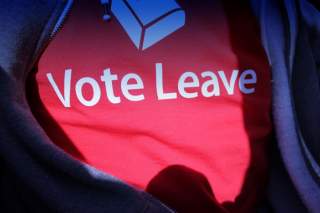 Last night, the British people voted to leave the European Union. When Britain joined the European Economic Community in 1973, the EEC was a mere free-trade area. Over time, the EEC became a supranational entity that at least superficially resembles a federal state. The European Union has its own flag, anthem, currency, president (five of them, actually) and a diplomatic service. It is governed by an overpaid and arrogant, but opaque and unaccountable, bureaucracy in Brussels. It was, therefore, perfectly reasonable to give the British electorate an opportunity to reflect on the changes that have taken place in Europe over the last forty-three years.

There were a number of reasons for the British decision to leave the EU. First, consider the democratic deficit. In a democracy, the electorate is able to choose and replace the government through free and fair elections. The choice, however, needs to be a meaningful one. What is the point of being able to choose between two or more candidates if none of them can effect specific policy changes? What is the point of having a vote if the real decisionmakers are unelected, unknown and unaccountable?

Before joining the EEC, Britain was a sovereign and democratic polity. Its governing institutions stretched back a thousand years and were the envy of the world. The island gave us representative democracy, rule of law, abolition of slavery, the English language and the Industrial Revolution. It saved Europe from Louis XIV and Napoleon during the French ascendency and from Wilhelm II and Hitler during the German ascendency.

Today, Great Britain is a part of an entity that is antidemocratic by design. The power to initiate pan-European legislation rests entirely with an unelected EU Commission and the legislation passed by national parliaments can be overruled by the European Court of Justice. The British resented the gradual loss of their sovereignty and neutering of their institutions, and wanted their self-rule back.

Second, consider the EU’s economic performance. When Britain joined the EU, the country was exhausted from fighting two world wars. It lost confidence after its imperial possessions gained independence. Most seriously, Britain was suffering from the socialist rot. Its centrally planned wartime economy was never fully liberalized, with food rationing persisting into the 1950s. In the meantime, West Germany, which was obliterated by allied bombing during World War II, but revived by Ludwig Erhard’s free-market reforms, powered ahead of Britain in terms of standard of living.

And so Britain threw in its lot with the nascent EU. That proved to be a bit of a Faustian bargain. In exchange for access to the common market, Britain had to accept an external tariff and, over time, a deluge of regulations from power-hungry Brussels. The former makes imports more expensive in Britain, while the latter makes British exports less competitive globally.

Today, the EU is plagued by high debt and unemployment, and low growth. Its share of the global economic output is rapidly declining. The mismanagement of the single currency has compounded Europe’s economic problems, by allowing some of the least productive EU nations to acquire unsustainable levels of debt. Those countries were bailed out, at massive expense, by richer countries. That has resulted in epic levels of resentment and worsened relations between European nation states. While Britain is not a part of the Eurozone, the country was obliged to financially contribute to the rescue of the common currency. Thus, far from seeing the EU as a guarantor of prosperity and stability, many Brits came to see the EU as a major source of economic malaise and political friction.

Third, consider the erosion of the rule of law. Clearly, Article 125 of the Lisbon Treaty states that each EU member state is responsible for its own debts. It is inconceivable that the Eurozone would ever have been born without that vital stipulation, which was necessary to assuage the concerns of the German electorate. Moreover, Article 123 prohibits the European Central Bank from buying sovereign bonds in primary markets and sovereign bonds in secondary markets—if the latter is done for fiscal, as opposed to monetary, reasons. Brussels and Frankfurt have ignored both stipulations in order to keep Greece afloat.

Similarly, the Dublin Regulation specifies that asylum applications by those who seek protection in the EU under terms of the Geneva Convention must be examined and processed at the point of entry, which is to say, by the first EU member state that they have arrived in. Greece and, to a lesser extent, Italy have failed to fulfill their obligations and allowed hundreds of thousands, possibly millions, of asylum seekers to migrate to other EU states, including Germany. The German government, in turn, has unilaterally decided to welcome these migrants only to then demand that they be proportionately distributed among other EU countries.

Whatever one thinks of the benefits of immigration, there is simply no denying that it has played a big role in the EU referendum. While I believe that immigration can be a force for good, much of the British electorate saw the influx of EU immigrants as a problem. Moreover, they saw the European response to mass immigration from non-EU countries as incompetent, potentially dangerous and contrary to the rules that ostensibly govern the EU.

Last, but not least, consider the role of the EU establishment. For decades, the European “establishment,” which is composed of the EU bureaucracy and pro-EU political parties and media at the national level, has powered ahead with centralization of decision making in Brussels. When the people of France and Holland rejected deeper integration in their respective referenda in 2005, the EU establishment simply relabeled the EU Constitution as the Lisbon Treaty and adopted it nonetheless. This act of supreme arrogance convinced many Brits that the EU establishment held ordinary people in utter contempt and that it would stop at nothing in order to pursue its agenda of an “ever closer union.”

There is no reason why nations committed to entrepreneurship and free trade should not prosper outside of the EU, for there is a European country that has not experienced international conflict since 1815 or civil strife since 1848; a country that trades freely with the EU, but also with the rest of the world; a country that is richer than all EU countries, except for Luxembourg; a country that maintains a world-beating degree of domestic harmony and democratic accountability; and a country that is not a part of the EU’s political or economic integration process, but which deals with the EU at an intergovernmental level via a series of bilateral treaties. That country is Switzerland.

What Switzerland has done in the past, Britain can do in the future. If it remains committed to free trade and entrepreneurship, Britain can show the rest of Europe that it is possible to live in prosperity and peace outside the suffocating confines of the EU. If Britain succeeds, other nations—including Denmark, France, Holland and Sweden—might learn from its example.

Marian L. Tupy is a senior policy analyst at the Cato Institute’s Center for Global Liberty and Prosperity and Editor of www.humanprogress.org.