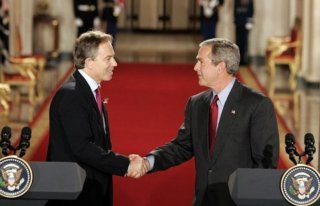 It’s been one hell of a month for Great Britain. Having voted to leave the European Union and seen off Prime Minister David Cameron, the mother country is now being roiled by a third firestorm: the release of the Chilcot Inquiry. This was a sweeping investigation into Britain’s involvement in the Iraq war, spearheaded by Sir John Chilcot.

Chilcot’s final judgment is scathing, if not particularly groundbreaking. Saddam Hussein, he said, posed “no imminent threat” and could have been contained. Military action, he concluded, was not a “last resort” but a premature choice made before other options had been exhausted. British intelligence produced flawed reports about Saddam’s WMD capability, which were further exaggerated by Prime Minister Tony Blair. One report of nerve gas was likely copied from the Sean Connery action flick The Rock.

That last farce shouldn’t surprise anyone who’s followed the recriminations over Iraq’s missing WMDs. Here in America, claims about Saddam’s alleged biological weapons laboratories were found to have come from “Curveball,” a German intelligence source and possible alcoholic who later admitted to fabricating everything. But the most ringing revelation from Chilcot—and a perfect encapsulation of Britain’s role in the war—is a cast-iron pledge Tony Blair made to President George W. Bush in the summer of 2002: “I will be with you, whatever.”

“Whatever”—that word could have papered over a lot. Would Blair have been with Bush if MI6 concluded Saddam didn’t, in fact, have WMDs? Would he have stood by his man if Parliament had voted British participation down? We know Blair wasn’t a reluctant partner in this transatlantic effort, but he was more contemplative than Bush. After Saddam fell, he reportedly warned, “The task is absolutely awesome and I’m not sure we’re geared for it.” He added, with alarming prescience, “If it falls apart, everything in the region falls apart.”

So why risk annihilating the Middle Eastern order to take out one dictator? The answer is that Blair, for all his eloquence and occasional nuance, thought very similarly to Bush. He was a “destiny politician” interested in grand strategies and grand accomplishments, not in playing “mini-ball,” as Bush contemptuously called it. His foundational foreign-policy experience was in Kosovo, where he took the lead in pressuring the reluctant Clinton administration. After 9/11, his world was cast back into those same vivid shades: good versus evil, democracy versus dictatorship, all of it at a global rather than a national level. Saddam’s connection to the Twin Towers might have been nonexistent, but prevailing morality meant he had to go.

There’s nothing wrong with a little principle in foreign policy. But Blair’s mistake was to entirely disregard his country’s national interest, to hitch his wagon to an ideological project even though he knew it could destabilize the Middle East and damage Britain’s security. So of course Chilcot concluded that the intel had been manipulated; we discovered that back when the so-called Downing Street Memo leaked. Nerve gas and aluminum tubes were peripheral to Bush and Blair—what mattered was them as world policemen screaming to Iraq’s rescue.

“Our responsibility to history is already clear,” President Bush declared in a national address, “to answer these attacks and rid the world of evil.” Everything else—America’s interests, the financial and human costs, even our national security—was submerged beneath this grandiose goal. In the end, we succeeded only in ridding the world of Saddam; evil came roaring back, with the Islamic State and a reinvigorated al-Qaeda. Jihadism today is stronger than ever before, in part because a void was torn open by our war, one that Chilcot now says was wholly volitional. This is what happens when you premise your foreign policy on punch-drunk idealism rather than national interest.

The Tony Blair who appeared at the podium following Chilcot’s release was ashen yet defiant. “I express more sorrow, regret, and apology than you can ever believe,” he declared. But still, “I believe we made the right decision, and the world is better and safer.” The world certainly isn’t, and neither is Britain, as ISIS terrorists pull off bombings in ever-closer proximity to the English Channel. But radical ideologues rarely learn their lesson. Blair will always be with Bush, whatever.

Matt Purple is a fellow at Defense Priorities and the deputy editor at Rare Politics.