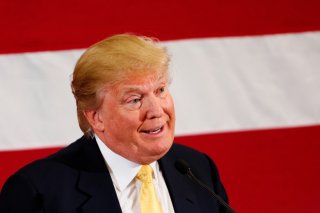 Hillary Clinton’s foreign-policy speech last Thursday showed what a nightmare Donald Trump is for foreign-policy realists, like me. Sure, Trump makes regular statements about allies, autocrats and war that seem consistent with my kind of realism: a more peaceful and less ambitious U.S. foreign policy. But he combines those thoughts with various bad and terrible ones—on trade, immigrants, torture, ISIS and more— and markets the package with the gravity and honesty of a dude on a corner trying to sell you the Rolex he has in his coat.

Trump’s endorsement may taint the realist notions he’s been poorly articulating on the trail, especially once he loses, as is likely. He offers defenders of our current meddlesome, bellicose and counterproductive strategy a perfect foil. He allows them to conflate prudent military restraint with protectionism, nativism and incoherence, label it all isolationist demagoguery, and then exhort everyone, in the name of decency, to toss the baby out with the bathwater.

That’s partly what Clinton is doing in the speech by casting the election as “a choice between a fearful America that is less secure and less engaged with the world, and a strong America that leads to keep us safe and our economy going.” Setting up that choice may be good electoral politics, but it’s bad for U.S. foreign policy, or at least for sensible discussion of it. We could easily be less aggressively engaged in the world and safer and richer for it, without closing down borders or withdrawing economically.

Some commentators suggest that realist academics should support Trump, or already do. Their reasoning is that Trump takes realist views, at least compared to other prominent politicians. Like modern realists, Trump questions the need for permanent alliances with rich allies facing limited threats; laments allies’ freeloading; criticizes the wars in Vietnam, Iraq and Libya; suggests that allies’ acquisition of nuclear weapons might lower U.S. defense burdens; sees deals with autocrats like Putin and Assad as a way to avoid worse results; and doubts the U.S. military’s utility in nation building and democratization.

Despite those views, almost no realist openly backs Trump—even using a capacious definition of realist that includes watered-down, Washington-insider types. Why not? Maybe a few hide their support out of social or professional caution. More likely, policy differences and general dislike are the culprits.

For one, Trump’s realism is flimsy at best. The shallowness and inconsistency of his foreign-policy utterances make it difficult to pin him with any -ism. Whether he would govern according to his realist-sounding talk is unclear.

Second, realists have views on matters besides those where Trump seems to agree with them. For example, my sympathy with Trump’s take on NATO and the Iraq War doesn’t make me overlook his terrible proposals to stop Muslim immigration in the name of trumped-up fears of ISIS or to use the U.S. military to “take out” the families of alleged terrorists and engage in other war crimes. Nor does the fact that a candidate occasionally makes a statement you agree with compel you to ignore its boastful, tacky, ill-informed, illiberal and dishonest context.

Trump makes it harder for realists to escape the isolationist label. Our intellectual opponents love to point out that interwar isolationists, like the America First Committee, held views likes ours about avoiding trouble by eschewing permanent alliances and crusades for democracy. They were wrong about the merits of fighting the Nazis, and often protectionist, nativist and anti-Semitic to boot.

In response, my colleagues and I often note that U.S. imperialists invented the term “isolationism” in the late nineteenth century to smear their opponents. We explain that we’re unlike 1930s isolationists because we’re for trade, diplomacy, immigration and foreigners, just not trying to manage the world with the U.S. military. We point out that not every adversary is another Hitler who we must stop.

Now antirealists can point to Trump’s statements and supporters as evidence that realist views only succeed politically when they travel with racism and protectionism. Standing up to Trump means supporting the U.S.-made international order, we’ll hear, including unwalled borders, permanent alliances and military activism.

Clinton’s speech follows that script. It positively mentions allies nine times, American exceptionalism twice and U.S. leadership five times, once to equate it with not cowering “behind walls.” Clinton will likely repeat that message in various forms until November. She’ll have chorus of support from foreign-policy elites, including neoconservatives, who mostly abhor Trump and already collaborate with Democratic hawks.

Whether or not that approach makes sense electorally, Clinton will probably win. A few consequences for foreign-policy realism are conceivable. A hopeful one is that future candidates, especially on the right, learn from Trump’s partial success that they can question the establishment take on foreign policy. That would be useful to broaden the debate in Washington.

Another possibility is that Trump’s loss, especially in a landslide, affirms the establishment’s strength. Conventional political wisdom tends to overexplain defeat in presidential elections, attributing it to everything a candidate says. The loser label on Trump may stain all his views. Realist rhetoric may then become even rarer in Washington. Of course, if Trump wins, it’s another, less predictable story.

There isn’t much realists can do to dodge Trump’s brand besides refuting those eager to confuse the difference. And we can always hope that Trump changes his tune. With Hillary’s speech touting the virtue of diplomacy with Iran, he may be polishing his neoconservative rhetoric.