Clinton's Road to the White House Paved with War 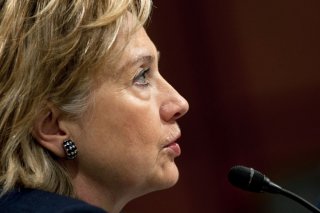 An article about Hillary Clinton’s foreign policy instincts in last week’s New York Times Magazine (“How Hillary Clinton Became a Hawk”) escaped widespread discussion on account of the New York and other Acela primaries last Tuesday. It deserves a second look in light of Clinton and Donald Trump’s resounding victories, and Trump’s foreign policy speech last week. Clinton is, according to the Times’ Mark Landler, “the last true hawk left in the race.” Why might that be?

Landler framed much of his analysis as a contrast between Barack Obama’s relative restraint vs. Hillary Clinton’s relative activism. He also emphasized the close ties that Clinton has cultivated with certain senior military officers, but especially those who affirm her faith in the military as an instrument of policy.

Clinton has, according to Landler, an “appetite for military engagement abroad” that far exceeds her few remaining GOP rivals, and that even surprised Defense Secretary Robert Gates and senior military officers during Obama’s first term. She was “a little more eager than they are,” explained Bruce Reidel, a long-time foreign policy hand, to get involved militarily around the world.

Clinton’s enthusiasm for military intervention was not shaken by the foreign policy debacles of the recent past. When consulting military officers for advice, she gravitated toward those urging the use of force and shied away from those who raised concerns.

For example, Clinton first met Gen. Buster Hagenbeck in October 2001, when he was the commander of the Army’s 10th Mountain Division based in upstate New York. The following year, he warned her that Bush’s plan to invade Iraq would be “like kicking over a bee’s nest.” Clinton didn’t listen, casting a vote in favor of the war that has haunted her ever since. She was similarly dismissive of former Army general Karl Eikenberry, who, as U.S. ambassador to Afghanistan in 2009, warned against a surge of U.S. troops there. Clinton also disliked Douglas Lute, another former general, who clashed often with Clinton confidante Richard Holbrooke over policy concerning Afghanistan and Pakistan.

Clinton preferred the counsel of men like David Petraeus and Jack Keane, “perhaps the greatest single influence on the way Hillary Clinton thinks about military issues.” Keane had tried but failed to convince Sen. Clinton of the need for a troop surge in Iraq in 2007. She later confided to Keane that he had been right about the surge, and she had been wrong.

They continued to confer regularly, and in 2009 she crucially influenced the debate over the Afghan surge. By wholeheartedly embracing Gen. Stanley McChrystal’s call for 40,000 additional troops, she “made it harder,” Landler writes, “for Obama to choose a lesser option.” “Hillary was adamant in her support for what Stan asked for,” Gates recalled. “She was, in a way, tougher on the numbers in the surge than I was.”

And that wasn’t the only time. In other foreign policy debates within the Obama administration— from leaving troops in Iraq after 2011, to arming anti-Assad rebels in the Syrian civil war, to extracting concessions from Russia as part of the vaunted reset (“I’m not giving up anything for nothing,” she said)—Clinton consistently adopted a hawkish line.

We know from other sources that Gates had grown tired of Clinton’s bellicosity by 2011. When she was pushing for action in Libya to overthrow Muammar Qaddafi, the then-Secretary of Defense complained that the military’s plate was already quite full. “Can I finish the two wars I’m already in before you guys go looking for a third one?” he recalled asking. The public, then and since, has seemed no more enthusiastic for starting new wars than Gates. But Clinton retains her interventionist biases.

In December 2015, Jake Sullivan, Clinton’s top foreign policy adviser, confided to Landler “There’s no doubt that Hillary Clinton’s more muscular brand of American foreign policy is better matched to 2016 than it was to 2008”; by February 2016, that claim seemed dubious, at best. An uptick in public support for the use of U.S. ground troops against ISIS had briefly spiked after the terrorist attacks in Paris and San Bernardino, but proved short-lived. Bernie Sanders’s repeated attacks on Clinton’s foreign policy views have earned the septuagenarian very strong support from millennials, the most war-averse generation in recent U.S. history.

Trump has gotten into the game, too. He declared last week that “the legacy of the Obama-Clinton interventions will be weakness, confusion and disarray.” In short, “a mess.” He’ll have many more opportunities to make that case over the next several months, but he’ll struggle to articulate a coherent worldview that can reliably be called less hawkish than Clinton’s. After all, while Trump scoffs at nation-building wars, or wars to implant Western-style democracy, his generally bellicose nature, enthusiasm for fights over trade, and chauvinistic nationalism, could lead him to stumble into foolish conflicts. If he did, his rhetoric during the course of this campaign suggests that he’d be anything but restrained as commander-in-chief.

Still, Trump has singled out the American foreign policy establishment for criticism. Elites are more inclined toward global activism than the public at large, and Hillary Clinton is more activist even than the establishment. That means that if Clinton wins in November, she will have been elected in spite of her foreign policy views, not because of them.

Elected officials tend not to parse voter sentiment so closely, however. If Clinton defeats a candidate who scorned her interventionist instincts, expect her to claim an electoral mandate to do more, in more places, than her predecessor. Expect her to generally lean toward acting abroad when others counsel caution, and to forcefully make the case for war when she meets public resistance. And expect the members of the foreign policy establishment to cheer her on.