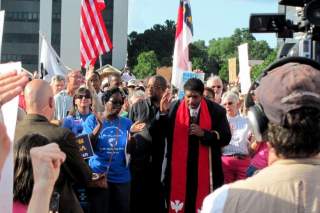 Generations of American conservative leaders and intellectuals have stressed the virtue of moving governmental power closer to the people. Special hostility is reserved for measures that centralize authority in Washington, but one often finds resentment in right-wing circles at state mandates that overturn local decisions. The official guiding principle for many conservatives is that government units closest to communities will more accurately and fairly reflect the values of people living in those communities. The corollary is that more distant, aloof layers of government should not casually or arbitrarily overrule their decisions. House Speaker Paul Ryan put the assumption most succinctly when he stated his belief that “the government closest to the people governs best.”

It’s an interesting theory with considerable appeal. But it avoids the obvious problem that local governments can become discriminatory, and even tyrannical, just like larger units. Citizens caught in such a situation need to have some way to vindicate their fundamental rights, and appealing to a more powerful level of government is the usual way of doing so.

But conservatives ignore another problem with their alleged fondness for local control. It is inconsistent and sometimes downright hypocritical. Both recent and not-so-recent episodes confirm that point.

Two recent episodes involve the overly discussed and absurdly hyped transgender bathroom issue. One is the North Carolina state law insisting that people entering public restrooms must use a facility based on the gender listed on their birth certificate, not their current gender identity. The Federal Justice Department has intervened to block the law, much to the outrage of conservative leaders in North Carolina and elsewhere, and the matter is now being litigated in the federal courts

But what most people seem to have forgotten is how the law came into existence in the first place. It was passed in a hasty legislative session of the North Carolina legislature to overturn a decision of the Charlotte city council to allow transgender people to use whatever bathroom aligned with their gender identity. In other words, a larger unit of government stomped on the wishes of the people of Charlotte and their elected representatives on a sensitive issue. And conservatives were fine with that. Indeed, conservative GOP Governor Pat McCrory and his supporters led the charge.

Lest anyone think that was a North Carolina aberration, something similar is now taking place in Texas, where the Fort Worth Independent School District has enacted a unisex bathroom policy. Lt. Governor Dan Patrick, a conservative Republican, is utterly outraged and is determined to have the state legislature overturn that decision. But Patrick is not satisfied with taking that step. He is demanding the resignation of the Fort Worth ISD superintendent of schools for even having the temerity to suggest such a policy. Moreover, he warns that if the local school board is not willing to take action against this “rogue” superintendent,” then he will make sure that the state legislature will. Once again, conservatives don’t seem overly concerned about what the people or officials of Fort Worth might prefer.

One can readily point to other examples of such hypocrisy. The alleged conservative commitment to federalism and states’ rights faded noticeably when state after state began to legalize medical marijuana. The commitment weakened further when Colorado and Washington dared to pass measures legalizing recreational marijuana. Instead of sober treatises about federalism being a useful laboratory for social experiments, there were shrill comments from the likes of Chris Christie about the rightful supremacy of federal law on the issue of illegal drugs. Chuck Grassley (R-Iowa), Chairman of the Senate Judiciary Committee, asserts flatly that state laws legalizing marijuana are unconstitutional and, that Washington, therefore, can and should ignore them.

Early statements suggested that a GOP president after 2016 would enforce those laws even in states that had legalized marijuana. Only when it became apparent that the tide of national public opinion was shifting, did conservative leaders begin to hedge slightly. Still, there certainly is no abundance of respect in right-wing circles for the states that have dared to repudiate even one portion of the drug war.

One can cite an example from three decades ago about how the alleged conservative commitment to keeping power close to the people is more illusion than reality. In the early 1980s, the United States had a patchwork of laws regarding the minimum age for consuming alcoholic beverages. They ranged from 18 to 21, with numerous variations in between. Neo-prohibitionists, led by Mothers Against Drunk Drivers (Later Mothers Against Drunk Driving) (MADD) led a national campaign to impose a nationwide minimum age of 21.

One might have thought that ideological conservatives would have resented and staunchly resisted such a blatant effort to transfer considerable power to the federal government over matters that had traditionally come under the authority of state and local governments. One would have been wrong. MADD not only won over the conservative Reagan administration, it won the endorsement of a major portion of conservatives in Congress. The weapon that Congress passed and the Reagan administration used to implement the new policy was the threat to withhold federal highway dollars from noncomplying states—a tactic that conservatives routinely condemned when used on other issues.

Given such a lengthy track record, it is clear that conservatives favor keeping power vested in governments closest to the people only when they are confident their policies will prevail at that level. Conversely, if they fear their policies will be rejected, they are just as willing as so-called progressives to see the alleged virtues of robust governmental power. They will embrace whatever level of government gives them and their policies home field advantage.

Ted Galen Carpenter is a senior fellow at the Cato Institute and a contributing editor at The National Interest.