Could North Korea be America's Next Forever War? 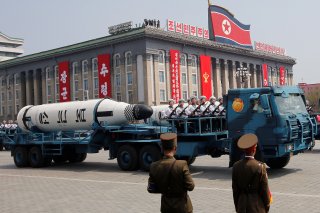 The estimable Mira Rapp-Hooper, CNAS Senior Fellow, and also a Senior Fellow at the Paul Tsai China Center at Yale Law School, recently published a thorough take-down of the illogic of the so-called “bloody nose” option against North Korea. Here are a few choice passages:

It makes little sense for American war planners to assume a “limited” strike like this would stay limited.... If [Kim Jong Un decided] to hit back, the result could be the most calamitous U.S. conflict since World War II.

Much of the speculation about the supposed benefits of the bloody nose revolves around the presumption that Kim would not retaliate. But, as Rapp-Hooper notes:

If Kim is irrational on matters concerning his nuclear weapons and missiles, it’s reasonable to assume he’d be similarly irrational across the board. If he cannot be stopped from trying to reunify the two Koreas, further U.S. or UN sanctions are also unlikely to alter his cost calculations.... Irrational actors are irrational in all domains—Washington does not have the luxury of picking and choosing where deterrence prevails.

The case against the United States initiating force against any country, especially a nuclear-armed North Korea, is strong. Indeed, Korea expert Victor Cha raised all the right questions last week.

If we believe that Kim is undeterrable without such a strike, how can we also believe that a strike will deter him from responding in kind? And if Kim is unpredictable, impulsive and bordering on irrational, how can we control the escalation ladder, which is premised on an adversary’s rational understanding of signals and deterrence?

The United States must continue to prepare military options. Force will be necessary to deal with North Korea if it attacks first, but not through a preventive strike that could start a nuclear war.

Under normal circumstances, these sorts of arguments should rule the day. Americans would have learned something from our other still-open-ended conflicts—mostly wars that we started—and be anxious to avoid future ones. Donald Trump secured the Republican nomination by railing against the Iraq war, started by a Republican, claimed (falsely) that he had always opposed that war, and hinted that he was intent upon avoiding similar misadventures, including the war in Afghanistan (that he subsequently expanded). A careful reading of Trump’s campaign statements would have revealed his hawkish instincts, but a number of voters were focused on Trump’s opponent, who they were convinced was an even bigger hawk.

Still, given public sentiment—and Trump’s occasional skepticism—it would be reasonable to expect that new wars were unlikely. Or, at least, that he was unlikely to start them.

As I said, under “normal” times. Alas, these are not normal times. Neither Rapp-Hooper nor Cha are likely to appear on “Fox and Friends,” which seems to be the best way to reach President Trump. So expect the drums of war to keep beating.

I would offer just one caveat to Rapp-Hooper’s excellent article. She notes how National Security Advisor H. R. McMaster has focused on North Korea’s ICBM capability “as opposed to any of Kim’s other weapons systems or behavior” as the Trump administration’s red line.

Such a declaration gives Pyongyang ample notice that Washington’s extended-deterrence commitments to its allies will become less credible once Kim deploys long-range missiles, and that the United States values its homeland far more than it values its international partners. It signals that we are gravely concerned for ourselves, but that allies are no more than a passing worry.

That is always the problem with extended deterrence. Countries do value their own security over that of others, if forced to choose. Knowing this, and in order to prove the credibility of extended deterrent threats to allies and adversaries alike, U.S. leaders might undertake actions that do not serve narrow U.S. national security interests. These actions might be fairly innocuous, such as sanctions or diplomatic pressure, but they might also include wars fought on behalf of allies.

There is no doubting Washington’s commitment and capacity for responding to an attack on any square inch of U.S. territory, from Portland, Oregon to Portland, Maine. But, as Henry Kissinger noted many years ago, “Because the consequences of our weapons technology are so fearsome, we have not found it easy to define a casus belli which would leave no doubt concerning our moral justification to use force.” Thomas Schelling, a leading strategist of the Cold War, shared Kissinger’s concerns. “To fight abroad is a military act, but to persuade enemies or allies that one would fight abroad, under circumstances of great cost and risk, requires more than a military capability,” wrote Schelling, with emphasis, in his seminal work, Arms and Influence. “Extended deterrence,” Schelling continued, “requires projecting intentions. It requires having those intentions, even deliberately acquiring them, and communicating them persuasively to make other countries behave.”

In short, we shouldn’t understate the difficulty of maintaining credible extended deterrence, or ignore the attendant costs and risks to the state issuing such deterrent threats. These risks now do (or soon will) include North Korean nuclear-tipped ICBMs targeting U.S. cities.