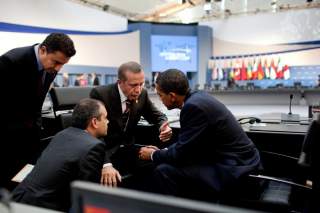 A former Turkish diplomat told me that during a visit to the Pentagon after 9/11, a top official explained that the Bush Administration hoped Ankara would take steps towards strengthening political and military ties with New Delhi, as part of a process that could lead eventually to the establishment of an alliance between the three pro-Western democracies of India, Turkey and Israel.

The Turkish official was dumbfounded. Where was his counterpart getting his political intelligence from? After all, it wasn’t a secret that when it came to the conflict between India and Pakistan, Turkey tended to identify and cooperate with the South Asian Muslim country.

No to mention the fact that notwithstanding the partnership between Ankara and Jerusalem, the Turks never considered Israel to be an “ally,” as they attempted balancing their relationship with the Jewish State and the Arab countries. In fact, Israel and Turkey didn’t establish full diplomatic until 1992 following the Oslo Process that led to the rapprochement between the Israelis and the Palestine Liberation Organization (PLO).

And in any case, the idea of Turkey siding with India and challenging the balance of power in South Asia didn’t make a lot of sense, particularly at a moment when the United States as part of its campaign against terrorism was strengthening its ties with Islamabad and elevating them to the status of a strategic alliance.

But then it seemed that Pentagon official was engaged in one of the intellectual exercises favored by both neoconservatives on the political right and liberal internationalists on the political left: Drawing up foreign policy narratives that reflect the dualistic cosmology of Manichaeism in which international relations is seen as a never-ending struggle between light and darkness, between the forces of good led by the United States that are confronting the bad guys, ranging from “rogue states” to “authoritarian regimes” that threaten to destroy the liberal international order.

But in the real world, as opposed to the imaginary universe that neoconservatives and Wilsonians dream about, there are very few really good protagonists or really bad antagonists.

So you need to make sure that while constructing a narrative one takes into account the “anomalies” and resolve the cognitive dissonance between the plot of the fairy tale and the many shades of gray that typify the relations between nations.

Hence, when the Bush Administration responded to the attacks on New York and Washington by Al Qaeda, the radical Muslim fundamentalist group, by launching the war against terrorism it identified Iraq and Iran as two of the leading members of the Axis of Evil it was planning to confront.

But that proposed narrative was full with inconsistencies. The secular Ba’ath regime in Baghdad and the Shiite clerics in Tehran regarded Osama Bin Ladin’s terrorist group as well as its ally, the Taliban, the Sunni Muslim fundamentalist movement ruling Afghanistan as ideological adversaries (in the case of the secular and semi-fascist Saddam Hussein) or as sectarian foes (in the case of Iran’s Ayatollahs).

On the other hand, two of Washington’s allies in the war on terrorism, Saudi Arabia and Pakistan, were the two main allies of the Taliban while Al Qaeda and its leader Osama bin Laden were proponents of the extremist Wahhabi Muslim dogma promoted by the Saudis and embraced by the Pakistanis.

The neocons that championed the Bush Administration’s move to oust Saddam Hussein and invade Iraq were never able to resolve this dissonance. They tried to protect it by turning “Islamo-Fascism” into the an all encompassing bogeyman that seemed to cover all the bad guys – Saddam and the Ayatollahs; Al Qaeda and Hizbolah; the Taliban and Hamas– while not dwelling on the role of that the Saudis and the Pakistan had played in the story.

They even provided the narrative with a Happy End – the ushering of the age of liberal democracy in the Middle East though the use of American military power. That the story ended with a stronger Iran, the rise of Islamic State (IS), and the return of the Taliban: well that would have to wait for another narrative.

So perhaps it’s not surprising that the same cast of narrative writers in Washington who were responsible for that foreign policy flop, are now trying to employ their creative talents to come-up with new story lines that would help convince us that once again the international system was dominated by a struggle between the forces of light and the forces of darkness. And guess which side we are on?

For a while it seemed as though the reality of international relations was anything but Manichean, with the Middle East degenerating into a struggle over power between a few allies (Turkey; the Kurds; Israel); not very-nice players who happen to be our friends (Saudi Arabia; Egypt); the bad ones (Iran; Syria; Hizbolah; Hamas), and the devil incarnate (IS) that happened to be a killing machine that owes its radical Islamist ideology to the Wahhabi teachers in Saudi Arabia. Not to mention Al Qaeda and its many political satellites that were located now somewhere between the bad ones and the devil incarnate.

That was kind of a bummer, if you plan to write a script for a western in which the noble protagonists fight the evil antagonists, as opposed to a post-modern David Lynch movie with its tormenting moral ambiguity, which unfortunately is how the international system looks quite frequently.

Russia’s military intervention in Ukraine in 2014 and West was encouraging in a sense that it helped to cast Vladimir Putin as the new global villain. That Putin strengthened Russia’s ties with its old client state Syria and maintained friendly ties with Iran, allowed the creative juices of the narrative writers to start flowing again and to identify the new forces of darkness: The authoritarian Putin; the murderous Bashar Assad; and the Ayatollahs in Tehran.

Never mind that the secular Assad and for that matter, Iran, were fighting the IS and other radical Sunni Islamist groups. Or that Russia had to protect legitimate strategic interests in the Middle East and was strengthening its ties with a U.S. ally, Israel. Or that Turkey was at one point allied with Assad, that it was an adversary of the Kurds and in the midst of a major diplomatic confrontation with Israel, and that together with the Saudis, Ankara helped support radical Sunni Islamist groups.

Indeed, it was becoming more and more difficult to cast Turkey’s Recap Tayyip Erdogan, who like Putin was accused of projecting authoritarian tendencies, as the good guy in the evolving narrative, especially after the Turks shot-down a Russian warplane on its border with Syria in November 2015, raising the specter of a war between the Russians and the Turks.

But not to worry: Amid the tensions between Ankara and the West in the aftermath of the attempted military coup in Turkey, and as the two countries struggled with their flagging economies, Moscow and Ankara decided to patch their relations, leading to a meeting between Erdogan and Putin in Moscow.

Judging by the reaction of the foreign policy crowd in Washington, the meeting was nothing short of an historic summit, a turning point in the Middle East politics that could reshape the global balance of balance: The supposedly two anti-Eastern authoritarian leaders, are cooperating with the other force of darkness, Iran, in shoring up Assad brutal regime and check mating the United States.

It almost goes without saying that this storyline is farfetched when one takes into consideration that Turkey is an important member of NATO and is seeking membership in the European Union (EU). Just count how many times President Barack Obama has met with Erdogan. And Turkey (like in the case of Russia), continues to hold free and democratic elections (certainly more open than those held in “liberated” Iraq or in Egypt).

There is no question that there are serious disagreements between the U.S. and Turkey – as there are between Russia and Turkey or between the Russia and the United States -- over the strategy of bringing an end to the civil war in Syria as well as over Kurdish issue. But those disagreements would not necessarily disappear if a more secular and liberal government had led Turkey.

On one level, scripting Manichean foreign policy narratives is at best an intriguing intellectual exercise. But at worst, it can impact the foreign policy discourse in Washington; in the way the neoconservative narrative helped shape public perception of policy after 9/11, creating the conditions for the decision to invade Iraq.

Similarly, a narrative that places Turkey at the center of a new anti-Western alliance could have the power of a self-fulfilling prophecy that would actually help create more incentives for Ankara and Moscow to cooperate against the U.S.

The reality is quite different. Indeed, in the embryonic multipolar system under which the U.S. is now operating, the notion that Washington could find itself in disagreement with Turkey (or other power) on one issue on Monday, and then find itself cooperating with it on another issue on Friday, could become a part of the new foreign policy routine. It doesn’t sound very exciting. But that’s the way the world works.