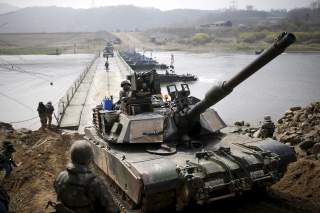 Representatives of the Brookings Institution are no fan of the president, but they disagree with the classical liberal Right that the United States should veer far from its present course.

An aide to one Republican president, of course, once proposed firebombing the Brookings Institute, the famous standard-bearing think tank of the establishment Left in Washington. Representatives from the Cato Institute and Charles Koch Foundation didn’t veer into the literal earlier this week during a debate with Brookings scholars at the Washington University in St. Louis, but they also didn’t hold their fire in discussing America’s changing global role. Indeed, William Ruger, vice president at Koch, bemoaned “ideological fantasies about changing the entire world.”

“I do think we have to be careful about trying to create heaven on Earth throughout the globe,” he argued, subtly linking foreign-policy interventionists to the socialists and failed Marxist-Leninists of old who favored the phrase.

Constanze Stelzenmüller of Brookings said Ruger’s approach lets Putinism off the hook. Replying to Ruger, she said: “I think we are focusing on the past too much. I think this is not about Vietnam or the Cold War, but about what Russia is doing now. And Russia is trying to undermine the stability of Ukraine and Georgia and the rest of the eastern periphery of Europe,” Stelzenmüller said. “And it’s trying to undermine the European project itself,” the EU, she said.

Chris Preble of Cato argued the past didn’t stay in the past—that after the United States helped topple Muammar el-Qaddafi in Libya earlier this decade, the message to North Korea and others was to never relent to American pressure to disarm. Ruger emphasized the singular need to go after the “true monsters,” and not be diverted elsewhere.

“What if the monsters are hacking your voting machines in Kansas?” replied Stelzenmüller.

Moderating Monday’s forum was Candy Crowley, the former CNN reporter who chaired a presidential debate in 2012. That year, Mitt Romney identified Russia as the greatest strategic threat to the United States, and President Obama scoffed at him; the role reversal in the U.S. parties since then has attracted wide comment.

But “the big, eight-hundred-pound elephant in the room is the fact that we’re $20 trillion dollars in debt,” Ruger retorted, noting that former Pentagon brass, like Chairman of the Joint Chiefs of Staff Adm. Mike Mullen, had identified the gigantic U.S. fiscal hole as the greatest national-security threat, not the Kremlin or any other state or non-state actor. “Even the Pentagon itself argues we have overcapacity in terms of our bases,” Ruger said.

Preble emphasized: “Total (U.S. Military) spending in inflation adjusted dollars is actually higher now that it was during the Cold War.” Said Ruger: “We should obviously be concerned about a revanchist Russia that wants to be the Soviet Union again, but we have to look at reality. . . . When you look at Russia, it’s just not the big bear of the Soviet Union days.”

These foreign-policy intellectuals part company, however, with others on Capitol Hill and in the White House on the issue of free trade. It is an issue that has engendered (at the very least, rhetorical) enmity from both parties since the rise of Donald Trump. But on this matter, the quartet of debaters seemed to reach far more agreement.

“We have a little bit of a dilemma. Whether you are Republican or Democrat, both presidential candidates opposed TPP, the Trans Pacific Partnership,” said Michael O’Hanlon of Brookings. “TPP was designed to raise the bar so that China could not necessarily get the same treatment everyone else did until it improved its own practices.”

The president, of course, has a long history of railing against Beijing for alleged trade impropriety. On his visit to the country this week, however, Trump has been notably dovish in his tone. Stelzenmüller noted a likely bind: “I think the White House has to choose whether it wants a war with North Korea, in which case, it will need China. Or a trade war with China, in which case, it probably can’t have the war with North Korea.”

Ruger said China, at present, should be looked at more through the trade lens than the security lens.

“It is not, mostly, foreign competition” that is destroying American jobs, argued Preble. “It is technology.” On this issue, at least, more united the debaters than divided them.