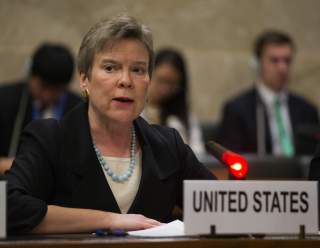 Rose Gottemoeller is NATO’s second highest-ranking official. Her career in government is extensive, and until her nomination by President Obama to be deputy secretary-general of the world’s most powerful military alliance, she focused exclusively on arms control issues. Deputy Under Secretary of Energy for Defense Nuclear Nonproliferation under Bill Clinton; Assistant Secretary of State for Arms Control under Obama; and Under Secretary of State for Arms Control under Obama—the titles of these positions are about as sophisticated as being an arms control negotiator, which is of course what Gottemoeller was in her past life. She served as the principal negotiator with Russia on the New START Treaty, a technically complicated pact that capped the number of nuclear warheads that the United States and Russia could deploy on its ICBMs. And she has been consistently lambasted by congressional Republicans as far too soft on Russia.

Why then, is Donald Trump reportedly asking NATO Secretary-General Jen Stoltenberg to remove her as the top deputy in the alliance? Josh Rogin of the Washington Post reports that “a representative of the [Trump] transition team met late last month with . . . Stoltenberg in Brussels and delivered a private but deliberate message: The incoming administration would like Stoltenberg to replace Deputy Secretary General Rose Gottemoeller.”

At first glance, the story doesn’t make a whole lot of sense. If Gottemoeller is described by Republicans as going too easy on the Russians throughout her career, why would Trump want NATO’s leadership to fire her? We still don’t know a whole lot about Trump’s foreign policy other than his viewing unpredictability as a virtue, but there is one thing we do know — Trump wants to improve bilateral U.S.-Russia relations. Gottemoeller would be able to assist the president-elect in doing just that in her spot as the second most powerful post in NATO. Requesting her termination would be about as smart for Trump as it would be for Syria’s Bashar al-Assad to ask the Russians to stop supporting him militarily. In other words, it wouldn’t be smart at all.

There is something else going on here. Just as Republican opposition to Gottemoeller was more an indictment on her relations with Congress than her knowledge and experience, Trump’s aides flying into Europe and lobbying for Gottemoeller’s removal is about the next administration feeling its oats. What it likely isn’t about is any overt hostility to Gottemoeller's personally.

It’s no surprise that Trump views NATO warily. He has railed against European countries in the alliance for not taking their defense spending seriously. To Trump, NATO appears to resemble an antiquated military alliance whose mission — defending Europe from Russian invasion — is designed more for Cold War scenarios than the present threat of Islamic terrorism. NATO’s capabilities for all practical purposes would be decrepit if it weren’t for the United States putting the rest of the alliance on its shoulders.

We don’t know whether Secretary-General Stoltenberg will take Trump’s advice and actually ask his deputy to resign. He is under no obligation to do so; it’s not like the United States Congress, for instance, can pass a resolution mandating NATO leadership to remove one of its officials. There is an even chance that Trump has bigger fish to fry and is merely using Gottemoeller as a card to play in his attempt to get NATO leadership to press forward with spreading the defensive spending burden more equally among its members (NATO, naturally, doesn’t work like that; the most the NATO secretary-general can do is beg for more defense money, which Stoltenberg has been doing for years). In any case, Trump should recognize that Gottemoeller isn’t an impediment to his plans for bettering relations with Russia. She’s an asset.