Despite the Bluster, Russia Is Not 10 Feet Tall 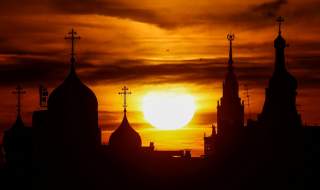 Early 1950’s America was a bad time to be a supporter of the Soviet Union or an associate of the Communist Party. Even a mere whiff of being in cahoots with a Russian could get you hauled before Sen. Joseph McCarthy’s investigative committee, where witnesses were badgered, accused of Communist sympathies, stripped of their credibility and career prospects, and converted into a lemming in American society. It was an ugly, conspiratorial time in the United States, with a Russian agent behind every corner, preparing to do America harm—that was the feeling anyway.

The Washington of 2018 is not at all comparable to the 1950’s Red Scare in the capital. But today, everything and anything related to Russia in one way or another is an all-consuming affair. It seems like the word “Russia” is mentioned at least a couple hundred times during every one-hour television broadcast. Vladimir Putin, the eternal keeper of the KGB flame, is depicted as an all-knowing evil genius spending every waking moment with one goal in mind: attack and embarrass the United States. The Russians are almost super villains of comic book lore: the goons in Moscow are enablers of a humanitarian catastrophe in Syria; the underwriters of dictatorial regimes in the Middle East; opponents of democracy and westernization in Ukraine; and, “rogue” actors providing safe haven for the world’s most dangerous cyber criminals. During congressional testimony this week, the top U.S. military officer in the Middle East referred to the Kremlin as both the “arsonist and the fireman,” a menace that contributes to a problem one day before offering its services as a cool-headed and reasonable mediator the next.

The bombast from Vladimir Putin has only fed the narrative. In his state of the union speech last week, after he rolled out a list of a new nuclear-powered cruise missile and showed a graphic of a nuclear missile over Florida, Putin sent Washington a loud warning that any nuclear provocation against Moscow or its allies would be quickly met with a not-so-nice response. “You didn’t listen to our country then. Listen to us now,” Putin intoned.

It’s tempting to bundle all of this together and conclude that Washington is going through a contemporary version of the 1950’s Red Scare. If I had a dollar for every time I heard the phrase “a new Cold War” on T.V. or in the newspaper, I’d be retiring at a very young age.

But just like the McCarthyite noise over s half-century ago, the discourse about Russia in America today has reached past an unhealthy obsession. When one is inundated with information and spin at the same time, one begins to lose all sense of proportionality and context.

Yes, Putin in a ruthless pragmatist whose national interests are often imnical to America’s. The United States wants the war criminal Bashar al-Assad gone—ideally six feet underground or deep in the Mediterranean Sea. Russia wants him to stay and has exerted a significant amount of firepower to help the regime retake territory from its enemies. America is fighting the Taliban, and Russia is purportedly providing weapons and equipment to them. Washington and Moscow see different end states in Ukraine, with the Trump administration hoping for a free and independent country and Putin hoping for a weak, corrupt and discombobulated mess that can be controlled. The United States and Russia hold competing views about the NATO alliance. And, regardless of whether President Trump accepts the facts or not, there is no doubt whatsoever among the spooks in the CIA and the tech wizards in the NSA—or among Special Counsel Robert Mueller’s team of prosecutors and investigators—that Putin ordered an influence campaign directed at the 2016 U.S. presidential election. Russia is a national security problem for the United States, hands down.

But to forget or write off Moscow’s many systemic problems is to contribute to the inaccurate narrative that has been developing in Washington over the last two years.

Let’s not forget, for instance, how economically fragile and institutionally weak Russia really is. Putin and his pals in the GRU and security services aren’t ten feet tall. Sure, Moscow’s military has made strides over the last decade—particularly on hybrid warfare, missile defense and information operations—but this doesn’t excuse the reality that the Russian armed forces is a pathetically inept specimen compared to the collective capability of the United States and Europe. NATO spent $895 billion on defense in 2015 to Russia’s $52 billion, a 17:1 ratio. Granted, Washington’s share was $641.2 billion, but that still means the other NATO members wrote a check that was nearly five times larger than what Russia had available during that year. Imagine how much greater the disparity would be if all NATO members—rather than just eight—fulfilled their 2 percent GDP spending commitments to the alliance.

The European Union, as dysfunctional and bureaucratic as it is, has a combined $16.4 trillion in economic wealth. And the bloc grew at a nice 2.5 percent in 2017, the highest increase in a decade. The Russians, by contrast, have a $1.23 trillion economy, and Putin’s government is lucky if it can keep a steady growth rate throughout the year (last year, the Kremlin didn’t have that luck). New York, Brussels and London remain centers of financial activity, where trading spans industries; in the Russian Federation, the economy is only as good as the price of crude on the market.

And while there is no question Putin has bested the United States in Syria and is frustrating Ukraine’s drift towards Europe, what have the Russians really won in the end? Can providing stipends to a bunch of misfit separatists in the Donbas and propping up a dictator in Damascus whose regime will require a Russian military and economic bailout for years—if not decades—be considered wins?

Are the Russians dangerous? Yes. Can Putin be a wily tactician against his geopolitical adversaries and cutthroat to his political enemies? He sure can; just ask the Russian dissidents who have been assassinated in Western Europe over the years. Does the Kremlin want to put America down to size? Absolutely.

But are the Russians superhumans close to resurrecting the Russian Empire? The numbers tell a different story. U.S. and European politicians who are responsible with formulating and executing foreign policy around the world would be wise to look at Russia for what it is—a competitor who plays by a different set of rules, but one that can be outmaneuvered due in part to its own internal shortcomings.

Image: The sun sets over domes of the Andreevsky Monastery and the main building of the Lomonosov Moscow State University in Moscow, Russia January 10, 2018. REUTERS/Maxim Shemetov