Does America Know What It's Doing in the Middle East? 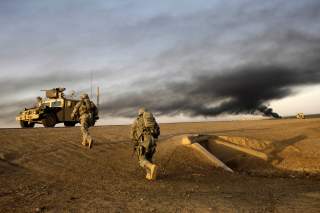 The United States has been heavily involved in the greater Middle East, including the Persian Gulf, parts of North Africa, the Horn of Africa and Afghanistan in Central Asia, for over forty-seven years. The U.S. foreign policy establishment seems determined to stay there for at least another half century, despite that fact that our strategic objectives are unclear at best, and our ability to achieve much beyond short-term military successes has proved wanting.

U.S. officials established an active military presence in the Persian Gulf in 1979 following the overthrow of the Shah of Iran, and the Soviet invasion of Afghanistan. Subsequently, the worst-case scenarios were averted—the collapse of the House of Saud, a Soviet victory in Afghanistan, and Saddam Hussein in possession of Kuwaiti oil fields. But Americans’ memories are also punctuated by tragedies and setbacks, from the Beirut bombing and the Mogadishu firefight, to the more recent disastrous war in Iraq and the ongoing fight against ISIS. These episodes often overshadow the day-to-day courage and sacrifice, as well as the individual acts of heroism, by the members of the U.S. military tasked with bringing order to a notoriously disordered part of the world.

Taken together, the missteps and follies evoke manager Casey Stengel’s question of the members of the 1962 Mets: “Can’t anybody here play this game?”

The difference, among many, is that the Mets were an expansion club, cobbled together from the castoffs from other Major League Baseball teams. The U.S. national security state of 2016 is a well-established juggernaut, nearly seven decades in the making. A team built for both speed and power, and that is able to draw on the vast wealth and talent of the United States of America, shouldn’t strike out so often, or make so many errors in the field.

And yet it does. Andrew Bacevich connects the dots in his latest book, America’s War for the Greater Middle East, which I recently reviewed at Barron’s.

A recurrent theme not covered in the review is the treatment of U.S. military officers who had the misfortunate of being on the wrong end of various tragedies. These include the 1983 Marine Barracks bombing in Beirut, the 1987 missile attack on the USS Stark, the 1996 attack on the Khobar Towers in Saudi Arabia and the 2000 suicide boat attack on the USS Cole in the Gulf of Aden. In each case, the post-incident reviews singled out the local commanders—Marine Col. Timothy Geraghty, the Stark’s Capt. Glenn R. Brindel, Air Force Brig. Gen. Terry Schwalier, and Navy Capt. Kirk Lippold, respectively—for failing to do more to prevent the attacks; the civilian policymakers responsible for putting U.S. military personnel in such vulnerable places, and in the service of dubious or ill-defined objectives, evaded accountability. Bacevich, a graduate of West Point and a Vietnam combat veteran, doesn’t conceal his contempt for this double standard.

He also shows that even clear-cut military victories have repeatedly failed to produce enduring strategic gains for the United States. Operation Desert Storm, the U.S.-led mission that evicted Iraqi forces from neighboring Kuwait, was portrayed as a victory so decisive that it paved the way to more frequent military interventions in the future. But George H. W. Bush, who allowed himself moments of euphoria, admitted to his diary that the war had not, in fact, produced “a clean end.” Bacevich observes, “within Iraq, U.S. intervention had produced conditions conducive to further violence and further disorder.” Twelve years later, the second Iraq War removed the murderous tyrant but unleashed bedlam. Similarly, in Afghanistan, a well-executed plan drove Al Qaeda out of the country, and their Taliban hosts out of power, but did not bring peace or order.

And yet a number of George W. Bush administration officials, foreign-policy elites and hawkish pundits believe that we had won in Iraq, and that victory is attainable in Afghanistan. Their faith in the efficacy of U.S. military power is as strong now as when Charles Krauthammer declared in January 2002 that “Afghanistan demonstrated that America has both the power and the will to fight, and that when it does, it prevails.”

From this logically flows the corollary, so evident in the narratives surrounding the United States’ many failures then and since: if we don’t achieve our objectives, it’s because we lacked the will to win.

Alas, it’s not that simple. It should be obvious by now that more U.S. troops deployed and more patience on the part of the American people will not fix what ails the region. More effort is meaningless if you’re playing with a flawed game plan.

Which brings us back to Casey Stengel. As the Mets compiled more losses than any other team in MLB history in 1962, he wondered aloud why they played so badly and what, if anything, he could do to fix it. Unfortunately, no such soul-searching is evident among the DC establishment, in part because there is no accountability. They continue to write columns for major newspapers, and they comprise the army of talking heads who grace our televisions 24/7. The American people seem generally disinterested in distant battles or in challenging those responsible for waging them.