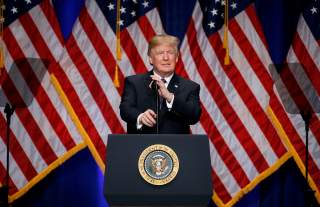 Markets reacted swiftly on Thursday to news that the Trump administration would impose a 25 percent tariff on imported steel and a 10 percent tariff on aluminum. Companies dependent upon such imports saw their stock prices plummet, driving a wider selloff across nearly all sectors. These companies “are going to see their costs of production go up,” explained the Cato Institute’s Dan Ikenson, “and they’ll also have trouble . . . because foreign manufacturers will be able to charge lower prices.”

And the domestic economic impact is unlikely to stop with lower stock prices on Wall Street and higher prices for most everyone else. Toomey called Trump’s tariffs “a big mistake that will . . . cost our country jobs, and invite retaliation from other countries.”

The putative national-security justification put forward by the Trump administration seems particularly dubious. R Street’s Clark Packard observes that “while steel unquestionably is vital to U.S. military superiority . . . only about 3 percent of steel shipped domestically in 2016 was used for defense and national security purposes.”

What’s more, many of the leading steel- and aluminum-exporting countries are U.S. allies, including Canada, Japan, Germany and South Korea. Other top suppliers to the United States include Brazil, Mexico and Taiwan. Although China produces nearly half of the world’s steel, it accounts for just 2 percent of U.S. steel imports, placing it eleventh.

Cato’s Ikenson notes, “Any U.S. decision to restrict imports based on the argument that an abundance of low-priced raw materials from a diversity of sources somehow threatens national security would . . . invite every other member of the World Trade Organization to invoke national security to protect favored industries.”

And whereas Donald Trump has long seen trade as a zero-sum game, with the trade deficit a giant scoreboard recording who’s up and who’s down, the losers will almost surely exceed the winners here in the United States. In 2015, Packard explains, “steel mills employed about 140,000 Americans, while steel-consuming industries (including manufacturers who rely on steel imports) employ 6.5 million Americans. Unnecessarily raising the costs of steel-consuming industries will jeopardize far more jobs than could possibly be saved at steel mills.”

Retaliatory measures by U.S. trading partners could impact a wide range of U.S. industries and businesses. Within hours of Trump’s comments, European Commission president Jean-Claude Juncker pledged to “bring forward in the next few days a proposal for WTO-compatible countermeasures against the U.S.”

“These U.S. measures will have a negative impact on transatlantic relations and on global markets,” added EU trade chief Cecilia Malmström.

None of these facts are likely to register with President Trump, who reportedly has been demanding higher tariffs for months. Indeed, in a tweet on Friday morning, Trump welcomed a trade war, saying that they “are good, and easy to win.” He even seemed to suggest that he might eventually retaliate by cutting off all trade with particular countries. “When we are down $100 billion with a certain country and they get cute, don’t trade anymore-we win big. It’s easy!”

Donald Trump seems ready for a fight—and he just might get it. And he will take all of the rest of us with him.