Donald Trump Should Give Diplomacy with North Korea a Chance 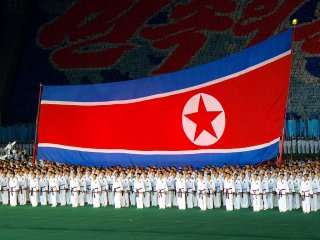 It seems like the North Korean version of “strategic patience” is working for Pyongyang and not for Washington, DC. The policy of “strategic patience” under the Obama administration was designed to change Pyongyang’s attitude toward denuclearization, but North Korea’s latest and most powerful nuclear test, conducted in early September 2016, has increased the sense of urgency in Washington to do something. After Kim Jong-un hinted at the possibility of test-launching intercontinental ballistic missiles in his New Year’s Day speech, this sense of urgency became even more acute and widespread than before. In this context, foreign-policy hawks and doves are still actively debating what the new administration should do. While hawks remain firm on the use of force, doves continue to call for diplomatic engagement. Neither option is appealing or risk-free, but President Donald Trump will have to decide between them soon, because waiting patiently has simply failed to denuclearize Pyongyang.

Perhaps driven by policy fatigue and disappointment in diplomatic efforts, an increasing number of policymakers and academics—including some prominent figures such as Mike Mullen, Sen. Lindsey Graham and Victor Cha—have been calling for a preemptive strike. However, this hawkish option must remain off the table as “an immoral act of the highest order” for at least four important reasons:

1. It’s simply too dangerous for South Korea. Nobody knows how Pyongyang would respond; if North Korea retaliates with its massive artillery force located along the Demilitarized Zone, then the greater Seoul region would be devastated in seconds. In a worst-case scenario, the North could use its remaining nuclear weapons.

2. The Chinese could intervene due to their 1961 defense treaty with North Korea, but such intervention could trigger the second Korean War.

3. Radioactive pollution arising from the attack would be a disaster for the region, if not the world. For some reason, not many people talk about this possibility.

4. The diplomatic path would be shut completely after the attack. Such an attack would only aggravate Pyongyang’s paranoia over “the U.S. hostile policy.”

It’s important to remember that “strategic patience” lacked one obvious component: diplomatic engagement. Unlike what many hawks may argue, it means that diplomacy still has a chance because, as Daniel DePetris points out, it “hasn’t been exhausted to its full potential.” Perhaps the use of force (i.e., a preemptive strike) would become a more attractive option if another attempt at diplomacy fails, regardless of the abovementioned risks. As of now, the diplomatic path remains open and, despite it being slim, the Trump administration should give diplomacy a serious try.

Given the Kim regime’s adamant belief that its security and legitimacy depend on the existing nuclear arsenal, achieving complete, verifiable and irreversible dismantlement should remain on the table, but only as a long-term goal. Recently, North Korean foreign minister Ri Yong-ho highlighted such steadfastness in his UN speech. Therefore, negotiating for a nuclear freeze would be more of a realistic goal in the near term. The resulting agreement should prohibit Pyongyang from not only conducting further nuclear and long-range ballistic missile tests, but also transferring related technologies in exchange for limited concessions such as partial sanctions relief. It’s highly likely that including international verification as a provision would be a source of contention while negotiating. In this regard, some experts and pundits, most notably Evans Revere, a senior advisor at the Albright Stonebridge Group, question the effectiveness of an agreement with North Korea that lacks verification measures. In the absence of “on-site monitoring,” Revere argues, Pyongyang could continue fissile material production and, at the same time, make nonexplosive—but necessary—refinements to its weapons.

The focus, however, should be limited in scope for now because, as Suzanne DiMaggio, director and senior fellow at New America, emphasizes, it can’t be a “grand bargain.” According to Greg Thielmann, a senior fellow at the Arms Control Association, the short-term focus should be “stopping the clock” instead of “turning back the clock.” Keeping the North’s weapons unreliable is the point, and Jeffrey Lewis, director of the East Asia Nonproliferation Program at the Middlebury Institute of International Studies at Monterey, confidently asserts that doing so “would be an achievement.” In 2016 alone, North Korea conducted two nuclear tests and numerous missile launches. Securing a freeze, of course, is far from being perfect and only an interim one. Despite this, freezing North Korea’s fast-advancing nuclear capabilities is well worth the effort because it would reduce tension on the Korean Peninsula and, as William Perry, former secretary of defense, claims, it has potential to become “the basis for a later discussion of a non-nuclear Korean Peninsula.”

How should the Trump administration approach Pyongyang diplomatically? Given a widespread, rigid view among U.S. policymakers that the Kim regime is nothing more than an “evil deceiver” and the tendency of those policymakers to automatically equate talking to North Korea with a reward, setting up a low-profile back channel with North Korean negotiators should be prioritized first. Meanwhile, the Trump administration should actively support Track II dialogues with North Korea. Several informal talks were held in 2016 and Pyongyang sent high-ranking officials to attend them. Taking advantage of such discussions, American Track II participants (i.e., North Korea scholars and former officials) should clearly signal U.S. sincerity to negotiate without preconditions. However, once an agreement is hammered out on a freeze at the official level, both American and North Korean participants should focus on exploring ways to better implement, if not build on, a freeze agreement, as well as move toward denuclearization. In this context, American participants would be able to ask their North Korean counterparts to further clarify what they often refer to as “the U.S. hostile policy” and, more importantly, get a sense of Pyongyang’s strategic calculus. This enhanced understanding could then assist Washington’s official engagement with North Korea over time.

There is no guarantee that the Kim regime would accept Washington’s offer to negotiate. Moreover, even if North Korea decides to negotiate, there is no guarantee that the resulting negotiations would bring about a freeze. Sanctions against Pyongyang should be strengthened until some kind of agreement is reached. As long as the military option remains off the table, working with sanctions, contrary to analyst Shawn McFall’s claim, would be the only possible option left once diplomacy fails. Ratcheting up sanctions, therefore, has to be more than just closing serious loopholes, including the “livelihood exemption,” and imposing a series of unilateral sanctions. Rather, most of such effort should be devoted to disseminating outside information into North Korea and, as Dursun Peksen, associate professor of political science at the University of Memphis, argues, empowering ordinary North Korean people.

Unfortunately, the effectiveness of sanctions would remain minimal at best without proper Chinese enforcement. This much-needed assistance will be forthcoming only when Beijing feels assured that its interests are going to be respected—particularly after a North Korean collapse. What that means is that the United States, most likely along with South Korea, would have to make some tough calls and strike a deal with China at some point. Some scholars and analysts, such as Geoff Dyer, former Financial Times Beijing bureau chief, suggest forcing Beijing to come on board through either direct or secondary sanctions, if not an increased military presence in the region. However, as was the case with the decision to deploy the Terminal High-Altitude Area Defense antimissile system in South Korea, China surely would vehemently oppose such hard-line measures, thereby exacerbating Chinese suspicion of U.S. strategic intentions. Amid intensifying U.S.-China rivalry, the Trump administration must find a way to convince Beijing all the more because, as Scott Snyder, senior fellow for Korea Studies and director of the Program on U.S.-Korea Policy at the Council on Foreign Relations, says, it’s something the Kim regime has been betting against.

The Trump administration inherited a more dangerous and nuclear-capable North Korea from the Obama administration. It’s currently estimated that Pyongyang has more than twenty nuclear weapons. Furthermore, North Korea mastering ICBM technology is only a matter of time. What all of this points to is that North Korea is no longer a second-tier threat and, accordingly, Washington has to move away from the failed policy of “strategic patience.” The first step in the right direction would be giving diplomacy another chance.

Yu Bin Kim is an Assistant Professor at the Republic of Korea Naval Academy. He holds a M.A. degree in East Asian Studies from Stanford University. His main research interest is China-North Korea relations. He tweets at @Yubs89.

This story was first published in The Diplomat.