Donald Trump vs. the 'Blob' 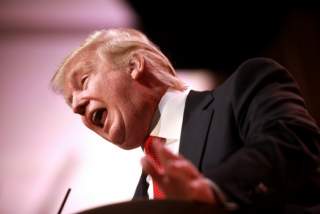 For those of us who consider ourselves foreign policy realists, we face a clear, if dispiriting, choice this November. Think of it as “the blob” vs. the Donald.

The “blob,” as (in)famously described by Obama foreign policy advisor Ben Rhodes, is the U.S. foreign policy establishment. Comprising current and former government officials, think-tanks, interest groups, and journalists, the blob is not uniform: it includes both neoconservatives and liberal internationalists. (Traditional foreign policy realists are largely absent.) But the blob does represent what could be called the center of gravity in U.S. foreign policy. It reflects a relatively narrow range of opinion and a penchant for seeing every international problem as an occasion for U.S. action, including force or the threat of it.

Hillary Clinton’s foreign policy embodies the blob, or at the least the Democratic wing of it. As U.S. Senator and Secretary of State she has amassed a copious public record on matters large and small. She has spoken often and at length about foreign policy during the primary campaign. Throughout, Clinton has been, by and large, a conventional liberal internationalist of our era: a supporter of our current alliance structure, a booster of free trade, a promoter of multilateral institutions, an advocate of human rights and democracy. Moreover, she is served by a large team of foreign policy advisors most of whose views, like Clinton’s, are well-known. That team—many of whom will assume a role in a future Clinton administration—is, by any standard, experienced, well-informed and capable. It is also unlikely to break with Washington orthodoxy.

There are differences, of course, between Obama and Clinton when it comes to foreign policy. Clinton’s record makes clear, for instance, that she is more interventionist than the president in the Middle East. As a senator, she voted for the disastrous invasion of Iraq. As secretary of state, she advocated the foolish intervention in Libya. As candidate, she has promoted the risky idea of a no-fly zone in Syria. This hawkishness explains in part explains the soft spot neo-conservative intellectuals have long had for her. But it makes her an unappetizing choice for realists, who, for all their many differences, are nearly uniform in their calls for more restraint in a region where 15 years of intervention have left us less secure and strategically adrift.

If Clinton’s foreign policy is both conventional and, looking forward, largely predictable, Donald Trump’s is, well… not. In fact, it’s hard to say what Trump’s foreign policy is, much less what it would be like were he to be elected.

Trump has, on occasion, raised important points dear to the realist’s heart: the perils of regime change, the need for cooperation with Russia, the lingering disgrace of burden-sharing in NATO. But there is no evidence whatsoever that he has thought long and hard about foreign policy. Nor is there much of a conceptual thread to his views, other than a belief that he, Donald Trump, will be able to cut better deals for the United States, whether we are talking about Iran’s nuclear program or multilateral trade pacts. Perhaps there is such a thing as a Trump Doctrine—a sort of Buchananism that harkens back to a pre-WWII approach to international affairs. But, if such a doctrine exists, it is hard to discern in the torrent of comment -- some incendiary, some ignorant, some simply incoherent—that the candidate seems to generate by the hour.

Which brings us to the inevitable question of character. We need not resort to amateur psychology in order to observe that Trump is impulsive, erratic and incontinent of speech. In other words, he lacks precisely that public self-control required in a president whose every word, no matter how off-hand, will be read as a definitive statement of U.S. foreign policy. (See Obama’s comment—one that he would live to rue -- setting a “red line” on the Assad regime’s use of chemical weapons.) Some suggest that Trump’s unpredictability may be an asset. Richard Nixon, it is true, stressed the importance of unpredictability in the conduct of U.S. foreign policy. But, whatever his many faults, Nixon was also a man with a lifelong interest in and knowledge of the subject. He deployed unpredictability as a tool to advance policies that served what he considered to be broader strategic purposes. One can only imagine what Nixon—a man of scant charisma but infinite political cunning—would think of Trump’s manic press conferences and ramshackle campaign.

If we are looking for a candidate to champion realist ideas in this fall’s foreign policy debate, Trump is simply not that individual.

This is a shame. Since 2000, realist voices have been largely ignored as our country stumbled into a quagmire in the Middle East and an intractable conflict with Russia over Ukraine. President Obama, it is true, has shown some realist instincts, particularly in his prudence when it comes to full-scale military involvement in Iraq and Syria. But he is less a realist than a chastened liberal internationalist. Despite Rhodes’ disdain for the blob, Obama’s foreign policy—with the signal exception of the Iranian nuclear deal—has rarely departed the Washington playbook.

At a time when we need new thinking—about a Persian Gulf policy based on balancing Iran and Iraq or about some modus vivendi with Russia over Ukraine—Clinton offers more of the same. We can expect no reassessment of alliances, no ruthless prioritization of interests, no reconsideration of the “all of the above” approach to foreign policy which sees international crises as an open-ended invitation to “do something,” no matter how ill-conceived or counterproductive. But we will know what we are getting. The same cannot be said of her opponent.

Realists pride themselves on accepting the world as it is, rather than how they would like it to be. They accept the imperative of painful trade-offs and moral compromises. The fall election is a case in point. For all of our misgivings about Clinton, the alternative is not some latter-day George H.W. Bush. It is Donald J. Trump, a man who, almost daily, gives further evidence of his unfitness for any high office, much less the Presidency of the United States.

A foreign policy debate that pits the “blob” against the inchoate ramblings of Donald Trump is really no debate all.

But it makes for an easy choice.

We should go with the blob.

Joe Barnes is the Bonner Means Baker Fellow at Rice University’s Baker Institute for Public Policy. Prior to joining the institute, Barnes was a career diplomat in the U.S. Foreign Service. The views expressed are his own.