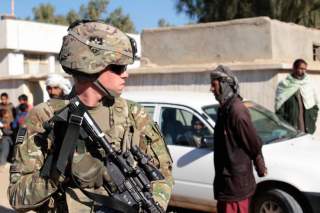 The West’s war against the Islamic State is winning—and yet losing. As Iraqi forces retake Fallujah, a symbolically important victory, U.S. officials warn that such conventional military accomplishments will only push ISIS toward more guerilla warfare.

“Our efforts have not reduced the group’s terrorism capability and global reach,” CIA director John Brennan bluntly told the Senate Intelligence Committee this month, noting that ISIS does not need traditional battlefield success to accomplish its goals. Its global appeal is largely unconnected to its Middle East fortunes, and lone-gunman terrorists need have no direct connection to any bona fide ISIS members to wreak havoc. No quantity of bombing will stop an idea.

In response to this military frustration, the Pentagon is pushing for additional U.S. boots on the ground—but such efforts to reescalate are met with justifiable American reluctance, as even neoconservative Max Boot concedes in a new piece at Foreign Policy coauthored with Michael Miklaucic.

“The U.S. public will not support more large-scale interventions like the ones in Iraq and Afghanistan,” Boot writes, an understated description of a war-weary nation that rightly believes its government tries too hard to solve the world’s problems. Indeed, a majority opposes putting Americans on the ground to fight ISIS or engaging in nation building in the Islamic world, which, in concert with Brennan’s remarks, reveals that simply throwing more soldiers at the problem is both politically and strategically ineffective.

The prudent alternative, however, is not what Boot goes on to suggest. His argument—that USAID should become a permanent “Department of Nation-Building”—is a desperate attempt to salvage a wasteful, ineffective foreign policy of interventionism despite overwhelming evidence that it is neither popular nor effective for keeping Americans safe.

While Boot is right to critique waste and duplication within USAID as it now exists, his gargantuan plan to nation-build in more than fifty countries—in other words, to do what we’re doing in Afghanistan on a quarter of the globe—would be expensive and impractical in the extreme. Though he insists the USAID budget (currently 1 percent of total federal spending, at $22.7 billion) would not need to increase to accomplish this nation-building mission, that is a difficult claim to credit given what recent nation-building projects have cost. As Amitai Etzioni argues in the National Interest, “nation building, foreign aid, imported democratization, Marshall Plans and counterinsurgency (COIN) with a major element of nation building are not only very costly but also highly prone to failure” and “best avoided.”

Worse yet, Boot conveniently ignores key facts that fatally damage his argument. “The United States cannot live with ungoverned spaces . . . which inevitably become a breeding ground for and exporter of terrorism, criminal networks, disease, refugees, and other problems,” he says—neglecting to mention that the nations which currently best fit this description do so because of past U.S. intervention (Iraq, Libya, Syria) or despite years of U.S. nation building (Afghanistan) and/or air strikes (Yemen, Somalia, Pakistan).

In other words, though he casts it as a fresh idea, Boot’s proposal is merely a new gloss on the same old interventionism, an attempt to sideline stagnant wars of his own promotion in favor of an array of nation-building projects that could themselves draw the United States into additional military conflicts and are almost certainly doomed to fail.

For the fundamental premise here is the same distortion underlying misadventures past: that it is in America’s interest and capability to remake the whole world to our liking, fixing every problem regardless of its real connection (or, more often, lack thereof) to our own security. Though Boot insists there is “no good alternative to nation-building if the United States wants to address the problem of failed states while avoiding endless military interventions,” this is at best a false dichotomy. The alternative is a renewed focus on defending America’s national interests, narrowly defined, accomplished by a much-overdue pivot toward restraint.

Bonnie Kristian is a fellow at Defense Priorities. She is a weekend editor at the Week and a columnist at Rare, and her writing has also appeared at Time magazine, Relevant magazine and the American Conservative, among other outlets.