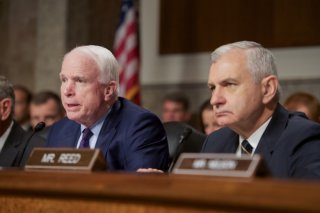 If there is one thing Sen. John McCain and many of his colleagues cannot stand, it is the automatic, arbitrary budget caps under the Budget Control Act that have forced the U.S. government to cut discretionary spending across the board. A law passed in 2011 that was originally meant to address America’s massive national debt problem and scare lawmakers into compromising on further deficit reduction measures quickly transformed into what former House Speaker John Boehner called a “meat axe” to the federal government. When Republicans and Democrats couldn’t agree on which parts of the budget to cut, sequestration kicked in and virtually everyone in Washington absent the most dedicated budget hawks panicked. Rather than deciding which part of the federal budget could sustain the cuts, sequestration came into effect and savaged defense and non-defense spending across the board.

Since that time, McCain has been one of the most vocal voices in Congress on the urgency of repealing the sequester caps and returning to a period where America’s soldiers, sailors, airmen, and marines were able to operate with predictable funding. As McCain and other defense hawks see it, the process of simply cutting the U.S. defense budget every single year for the next decade, and doing so regardless of the geopolitical situation at the time, is not only irresponsible legislating — it is downright dangerous for the men and women in uniform who depend upon Congress to allocate the resources required to keep the country safe.

As Chairman of the Senate Armed Services Committee, McCain has the power to call hearings on any issue in his committee’s jurisdiction. And that’s precisely what he decided to do last Thursday, September 15, when he asked the service chiefs to testify on the Fiscal Year 2018 fiscal year’s budget request. But more importantly, McCain and his colleague Sen. Jack Reed used the opportunity to once again highlight how devastating the Budget Control Act has been to the U.S. military’s preparation, planning, training, and upkeep.

“The world has only grown more dangerous over the past five years,” McCain said in his opening statement,

but the resources available to our military have continued to decline… Rising threats and declining budgets have led to shrinking military forces that are struggling to sustain higher operational tempo with aging equipment and depleted readiness – and doing so at the expense of modernizing to deal with the threats of tomorrow.

While one can certainly disagree with McCain about his assessment of global security threats, it’s difficult to argue that arbitrary budget caps haven’t impacted the military — indeed, departments and agencies across the government — in a negative way. In fact, in a Washington that is all too frequently polarized along partisan and ideological lines, the majority of Republicans and Democrats agree that the sequester caps either need to be increased or repealed outright. When President Obama, all four service chiefs, the chairman and ranking members of the armed services committees in both the House and the Senate, and congressional leadership all agree that something needs to be done, it’s safe to say that automatic budget caps are seen as a significant fiscal and national security problem across party lines. Even Senate Majority Leader Mitch McConnell, who originally praised the Budget Control Act as the only way to keep a lid on excessive spending, supported the two-year budget agreement that was reached last year, which temporarily increased the caps by $80 billion.

And yet, despite bipartisan acknowledgment that something needs to be done to overturn the sequester, we are still a long way from a grand bargain. Attempts to simply nullify the Budget Control Act through amendments have gone nowhere, and budget hawks in the House Freedom Caucus have enough power in the House Republican conference to ensure that an override of the budgetary tactic is a political non-starter.

To McCain’s chagrin, we are likely to see the same old congressional maneuvers over the next several years. This includes a series of short-term budget agreements that lift the defense spending caps by a compromise amount in exchange for a similar increase in non-defense spending, all the while extending the length of the sequester in later years.

For defense hawks like McCain, this is better than the alternative of letting temporary spending increases expire and returning to the amounts specified in the Budget Control Act. But for the service chiefs responsible for the military’s acquisition and readiness, it’s very difficult to prepare for the future one or two years at a time. The White House, Pentagon, and congressional leadership may not like it, but this is as much certainty as the service chiefs are going to get.