Give Abbas Another Chance 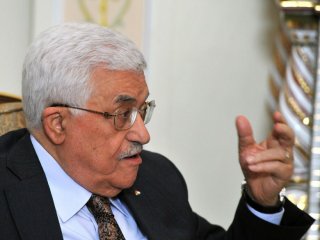 Mahmoud Abbas, the president of the Palestinian Authority, is old and tired. The eighty-one-year-old from the village of Safed has been ensconced in the dysfunction and heartbreak of Palestinian politics for most of his professional life, where he played second fiddle to Yasser Arafat for years before climbing his way to the top of the PA hierarchy.

U.S. negotiators and senior officials who have dealt with Abbas describe him as the best partner for peace that the Israelis are likely to get, a man who is, at the very least, far better than Arafat. Unlike his predecessor, Abbas refrains from endorsing violent Palestinian attacks against Israeli soldiers and civilians. And despite the sporadic wave of violence that has been occurring over the past six months (resulting in the deaths of twenty-eight Israelis and at least 190 Palestinians), no one who is honest with themselves could reasonably argue that Mahmoud Abbas is hoping that the knifings on the streets of Israel and the West Bank will escalate into a third Palestinian intifada.

Abbas isn’t perfect, of course. His refusal to take Ehud Olmert’s generous offer in 2008 was the equivalent of popping a hot-air balloon in midflight. Since that time, there hasn’t been an acceptable, comprehensive peace formula offered by the Israelis and Palestinians that could be a blueprint for further discussions down the line. The Obama administration’s two efforts to get the Israeli-Palestinian peace process back on track (2009–10 and 2013–14) quickly succumbed to arguments about tactics, prisoner exchanges, settlement activity and the whether Israel should be recognized exclusively as a Jewish state. The two efforts no doubt took a toll on both Netanyahu and Abbas, but it was an especially bitter pill for the Palestinian president to swallow.

Nearly two years after Secretary of State John Kerry’s nine-month effort in 2014 collapsed like every other major Israeli-Palestinian peace negotiation since the Oslo Accords, there has been zero movement on either side. Settlements have expanded in areas of the West Bank that Palestinian officials believe should be a part of their future state; Palestinian officials are using the United Nations and the International Criminal Court to press war crimes charges against Israel for the occupation; PA diplomats have attempted to push peace parameters through the Security Council; and Prime Minister Benjamin Netanyahu’s coalition government has moved further to the right. If the possibilities of a peace deal were narrow in 2014, they are slim to none at the present time.

And yet despite the very low prospects of a return to Middle East diplomacy (even the Obama White House has acknowledged that a two-state solution will not happen during the remainder of its term), President Abbas’ candid interview with Israel’s Channel 2 late last month was a bright spot in an otherwise dark tunnel. Mixed in with the usual condemnation of Israel’s unilateral activities in the West Bank and its use of deadly force against Palestinians was a welcome realization from Abbas that direct negotiations with the Israeli government is still the best way to arrive at a durable resolution to the conflict.

Phrases from Abbas like “I’m prepared to meet Netanyahu anywhere, any time,” “I want to cooperate with the Israelis” and “I want to see peace in my lifetime” constitute the kind of rhetoric that Prime Minister Netanyahu and his government have long complained is absent from the mouths of Ramallah’s leadership. His denunciation of Palestinian stabbing attacks on the streets of Israel’s cities (“We don’t want you to kill and die. We want you to live and the other to live”) and his explanation of why it is imperative for Palestinian security forces to cooperate with Israel on counterterrorism and internal security may not seem like much, but they in fact serve as an important signaling effect to the other side: as bad as the security and political situation is today, the most powerful Palestinian official in the PA is ready and willing to kick the dialogue out of its slumber.

If Netanyahu says that he is willing and able to meet with Abbas at any time, and Abbas is saying the same thing during his interview, what on earth is keeping the two leaders from actually doing it? If both men are calling for the same exact thing, why is it so difficult to cajole them into the same city—let alone the same room?

At its core, the reason why Netanyahu and Abbas don’t get along very much is because both men find it difficult to back down from their principles. For Netanyahu, the notion that the Palestinians would refuse to label Israel as a Jewish state is incomprehensible; for Abbas, caving on this demand is politically infeasible and would make the Palestinian Authority an accomplice to second-class citizenship for Palestinians living within Israel’s internationally recognized borders. On settlements, Abbas finds it hard to fathom why Netanyahu cannot see the bigger picture—that retaining Israel’s settlement blocs and building new ones means the death of the two-state solution as we all know it. Meanwhile, Netanyahu views Abbas’s complaints on settlements as a red herring, meant to distract the international community from Palestinian terrorism. The Netanyahu-Abbas relationship resembles a vicious circle where nothing gets done and the actions of one lead to equally destabilizing and unproductive actions of the other.

With Abbas’s interview last week, however, we may finally be witnessing an attempt by the Palestinians to escape a Middle East conflict that can best be described as a sinking crater. When Abbas refers to Netanyahu as “the partner” for peace, the prime minister’s office would be wise to listen and take advantage of the compliment by sending some equally constructive words back to Ramallah. Or, better yet, Netanyahu could order his coalition government to curb the exponentially high rate of home demolitions that occurred over the first three months of this year. For the Israelis, temporarily pausing demolitions of illegal Palestinian structures would be more politically palatable than another moratorium on all settlement building. And if the Israelis do indeed show good faith, the Palestinians should be required to show some good faith of their own by refraining from any further attempts in the Security Council to internationalize a problem that can only be tackled by both parties directly.

Words mean something in diplomacy. If the Israelis and Palestinians can’t get themselves to authorize confidence-building measures to improve the atmosphere, maybe they can muster the words to do so.