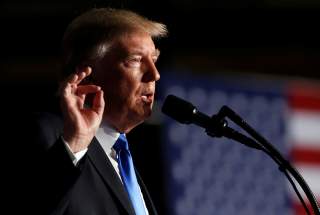 President Trump’s appointment of John Bolton as national security advisor is his final betrayal of anything resembling a realist foreign policy. During the 2016 presidential run, Trump’s statements were a curious, contradictory mixture of realism and extreme nationalistic belligerence. In the former category were his comments about NATO being an obsolete institution characterized by shameless free riding on the part of allies, the foolishness of Washington’s regime-change and nation-building wars, especially the Iraq intervention, and his criticism of the Obama administration’s hostile attitude toward Russia. But those sensible observations coexisted with alarmingly hardline positions on Iran, North Korea, and the overall war on terror. It was a matter of conjecture which of those competing impulses would win out.

We now have our answer. Trump seems to have fully consumed the hawkish Kool Aid, and his new team of foreign-policy advisers will reinforce his worst impulses. Not only is the Iran nuclear deal in great peril, but prospects for diplomatic dialogue with North Korea are now remote, confrontations with China over North Korea, Taiwan, and the South China Sea are more likely, and even hopes of pulling back from the new Cold War with Russia are fading fast. Indeed, there is an alarming risk of U.S. military involvement on multiple fronts.

Trump’s retreat from realism and restraint, though, has been building since the earliest weeks of his administration. The selection of uber-hawks like Pompeo and Bolton to key policymaking positions merely represents the culmination of that depressing trend. One of the first actions that Trump took upon entering the Oval Office was to assure NATO members that he regarded the alliance as a crucial component of America’s security strategy and no longer saw it as “obsolete.” Vice President Mike Pence and Secretary of Defense James Mattis reinforced that message with their fawning presentations at the annual Munich Security Conference.

Mattis likewise soon embarked on a reassurance tour of East Asia, making it clear to both Japan and South Korea that there would be no significant change in U.S. defense policy in their region. Hints that Trump had given during the campaign that he expected those two countries to take greater responsibility for their own defense and dealing with troublesome players like North Korea, Mattis effectively squelched. The stale status quo in alliance relations would continue unabated.

The administration’s retreat from realism soon impacted U.S. policy toward Russia. Instead of abandoning the Obama administration’s impractical demands, most notably that the Kremlin return Crimea to Ukraine, Trump and his advisers reiterated that demand. The hardline stance on the Crimea issue was the antithesis of realism. Russia is no more likely to withdraw from Crimea, the location of its crucial naval base at Sevastopol, than Israel is to withdraw from Syria’s Golan Heights or Turkey from northern Cyprus. In all three cases, the countries seizing those territories had high-priority geopolitical and security motives. Demanding that Moscow cede Crimea to Ukraine as a condition for improved U.S.-Russian relations is a textbook diplomatic nonstarter. Yet that is the unrealistic policy the Trump administration embraced. Indeed, Washington’s overall conduct toward Moscow is at least as harsh, if not harsher than it was under Obama.

An equally graphic—and incredibly disappointing—retreat from realism was Trump’s decision to continue (even escalate) America’s futile war in Afghanistan, which he had criticized on several occasions during the 2016 campaign. His attempt to portray his initiative as something other than a nation-building enterprise and distinguish the new strategy from previous versions was embarrassing.

The reversal of his position on Afghanistan provides a possible insight into the reasons for the president’s overall retreat from realism. Trump stated that his initial inclination was to abandon the mission, but that once his advisers stressed the negative consequences of such a step, he realized that he must continue the effort—just with a more effective approach. That explanation suggested that Trump’s commitment to some realist positions was always superficial and just vaguely instinctual. Skilled advisers committed to a more interventionist foreign-policy status quo, such as Secretary of State Rex Tillerson, National Security Advisor H. R. McMaster and Defense Secretary Mattis, could easily manipulate a neophyte who had no firm commitment to his professed views or the knowledge to defend them.

The principal change with the emergence of the new foreign-policy team is that Trump is likely to be maneuvered into adopting even more hawkish, belligerent positions. When someone like Mattis now appears to be the principal voice of reason, any hope of realism and restraint has virtually vanished. The administration’s foreign policy going forward is likely to most closely resemble that of George W. Bush’s administration. And such a prospect is very bad news indeed for realism and the best interests of the American people.