Has Paul Wolfowitz Learned Nothing? 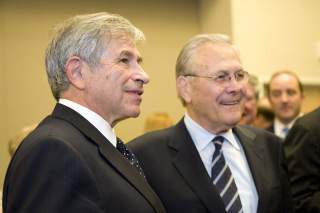 Over a decade after he left the Bush administration as the Defense Department’s number-two official, Paul Wolfowitz has mostly avoided the limelight. Rather than sign #NeverTrump letters or spout off every week on cable television, he’s tended to quietly influence the foreign-policy debate from his perch as a resident scholar at the American Enterprise Institute—a think tank full of former Bush officials, which often served as a loyal opposition to the Obama administration. For vocal, antiwar opponents who long believed that the 2003 invasion of Iraq was the worst foreign-policy blunder since the Vietnam War, Wolfowitz is the epitome of strategic ineptitude.

Those criticisms were never entirely fair. Despite the common depiction of Wolfowitz directing some neoconservative cabal within the Bush White House to dominate the world, the long-time Pentagon official wasn’t a warmonger in the traditional sense of the term. Indeed, Wolfowitz’s desire to overthrow Saddam Hussein’s regime and replace it with a democratic government in the mold of a Western power was shared by the Washington foreign-policy establishment. We tend to forget, for instance, that President Bill Clinton signed the Iraq Liberation Act, which made regime change U.S. policy. In Wolfowitz’s eyes, the Bush administration was merely implementing a policy that a Democratic president signed into law five years prior.

What grates on many realists is that Wolfowitz, twelve years removed from the U.S. government and over fourteen years since Operation Iraqi Freedom commenced, still refuses to admit that the Iraq War was a mistake. Wolfowitz’s belief has been stubbornly consistent: Saddam, a bloody tyrant, a war criminal and a human-rights abuser—who gassed the Kurds, gassed the Iranians, invaded two of his neighbors and took pot-shots at U.S. planes patrolling no-fly zones—deserved to be taken down. If bad decisions were made, they occurred during the execution of the strategy: “The principal reason why the war in Iraq proved so difficult and lasted so long,” Wolfowitz wrote on the tenth anniversary of the invasion, “is that it took so long to develop a counterinsurgency strategy.” How a counterinsurgency strategy was supposed to be undertaken with so few troops (before the war, Wolfowitz publicly swatted away Army Chief of Staff Eric Shinseki’s assessment that several hundred thousand soldiers would be required to occupy a nation as large as Iraq) was conveniently omitted.

Wolfowitz’s long interview today with Politico’s Susan B. Glasser demonstrates that he indeed hasn’t learned many lessons from the past fifteen years.

He suggests that the Trump administration could use its Tomahawk missile attack on an Assad regime air base as a jumping-off point to initiate a Dayton-like peace agreement to end the civil war. Because President Trump acted in a bold way against the use of chemical weapons and was willing to use military force, Wolfowitz says, “The U.S. now has an opportunity for a completely different environment in which to negotiate.” Hidden in the discussion, of course, is why the Russians would ditch a proxy that they have been supporting so strenuously, particularly when Trump himself has intimated that Washington has no intention of using military force to change the regime. We would all like a negotiated resolution to the Syrian Civil War, yet there are so many external players involved in the conflict that a few U.S. missile strikes on a single target isn’t likely to strike the fear of god into all of them.

On Iraq, Wolfowitz advises a long-term U.S. presence in the country once ISIS is eventually defeated in Mosul. “The alternative,” in Wolfowitz’s view, “is to let a very important, critical part of the world go to hell literally and lose American influence.” And yet, if Americans have learned anything from the Iraq experience, it’s that all of the U.S. soldiers in the world don’t have the power to reconcile a society that is riven by the very sectarian fissures that the invasion of Iraq opened up. Whether we like it or not, Iraqi politics is far too complicated for the United States to understand—and unless Iraq’s politicians exhibit the leadership qualities necessary to heal the country once the ISIS problem is dealt with, all of the prodding or poking from the Americans will only have a short-term, tactical effect.

Wolfowitz is still at heart a humanitarian. He sees democracy, free markets, accountable governance and competitive elections as the antidote to many of the problems plaguing the world today. Nobody would dispute that point; democracy is a far better alternative than autocracy.

It would be great for the entire planet to consist of nothing but Western-like democracies, where members of parliament, prime ministers and presidents are thrown out of office for malfeasance or corruption. That is a world to which Wolfowitz and many of his friends in Washington still aspire—a noble goal for sure. But simply put, the world will never reach that penultimate objective, and aggressively pushing for nations to evolve into the democratic ideal will inevitably make the building of positive relationships and alliances tougher for the United States to achieve.

It will be up to the Trump administration to figure out which path—realism or Wolfowitz’s version of the ideal—holds more promise.