Here's How Trump's Pentagon Could Take On ISIS 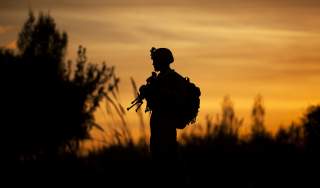 President Donald Trump has spoken: he wants his secretary of defense and chairman of the Joint Chiefs of Staff to get to work immediately on a plan to aggressively confront the Islamic State in Iraq and Syria. And according to an executive order he signed last week, he wants that plan on his desk by late February.

The fact that Trump decided to hold a signing ceremony at the Pentagon for a directive that he could have just as easily ordered through a phone call or a teleconference is an indication of how serious he views the ISIS problem. His administration’s Middle East policy has yet to be fully formed, but we can say with absolute confidence that whatever policy is eventually drafted will have the defeat of ISIS at the very top of the list. Trump’s “bomb the hell out of ’em” rhetoric on the campaign trail and his promise to the American people that ISIS would soon experience the fate of the pirates (that is, annihilated) will now be converted into actual policy.

The Pentagon brass already has a stack of options left over from the Obama administration that were either never acted upon or were deemed by President Obama to be unhelpful to the wider counter-ISIL campaign. Chairman Dunford has met with President Trump and Vice President Mike Pence on the ISIS issue on a number of occasions, so it’s likely that the White House has some idea about what the Pentagon will ultimately propose. Either way, the National Security Council will receive and debate the full range of options over the next thirty days.

Here are several that are certain to be included in the report:

1. More Tactical Authority: A universal chain of command with clear rules of engagement is instrumental in any armed conflict, particularly when the enemy that you are fighting has a habit of using the civilian population as cover. That tactic, of course, is an ISIS hallmark; one of the reasons the Iraqi offensive in Mosul has been taken so long and has hit the Iraqi security forces with significant casualties is because roughly a million civilians are in the middle of the war zone. ISIS is savvy enough to recognize that the U.S. military will not launch air strikes on their positions if a bunch of civilians are in the area.

In order to accelerate the campaign against ISIS in Mosul, the Pentagon brass could recommend a change in the rules of engagement—perhaps providing more authority for the special operators working with the Iraqi security forces on the ground and the pilots providing cover from the air to take out certain targets that U.S. personnel are prohibited from striking today. Unfortunately, expanding the target list also means increasing the risk of civilian casualties in a city that is heavily congested with displaced families. If President Trump is prepared to accept the cost of hundreds of additional civilians being killed in U.S.-led operations, the liberation of Mosul could be sped up and the pace of operations could intensify.

2. More Troops on the Ground: There are approximately six thousand U.S. soldiers performing advisory functions and special operations against ISIS targets. This is a far cry from the 150,000 U.S. troops during the bad old days of the 2006–08 time period, when Iraq looked like it was coming apart at the seams. But it’s also the height of what the Obama administration would accept; President Obama understood that the domestic political climate hindered a more robust U.S. presence in Iraq and Syria. And Obama strongly believed that deploying thousands of additional U.S. troops closer to the front lines wouldn't be helpful anyway; why would local partners step up if they had U.S. soldiers fighting and dying for them?

The Obama paradigm, though, is no more. There’s a new sheriff in town, and that sheriff wants results—and he wants them fast. According to a CNN report from last month, the Pentagon could recommend the deployment of up to twelve thousand additional U.S. troops into Syria in order to recapture ISIS’s self-proclaimed capital city of Raqqa. U.S. special-operations forces would serve as the tip of the spear, while the rest of the troops would be deployed on the outskirts of Raqqa, feeding targets to U.S. pilots in the air. This would essentially be a miniature U.S. thrust deep into ISIS territory, an operation that would represent a drastic change of approach from the previous administration. Local partners like the Syrian Democratic Forces would be assisting U.S. soldiers doing the fighting on the front lines, rather than the other way around.

3. More Weapons to the Kurds: The U.S. military has airdropped weapons to Arab units of the Syrian Democratic Forces in northern Syria on a number of occasions, logistical operations meant to avoid the Syrian Kurdish factions for fear of enraging the Turks. Turkey's vehemence against Syria’s Kurds has forced Washington to navigate a tricky balance between angering a key NATO ally—one that allows U.S. bombers to take off from Incirlik Air Base—and a powerful force on the ground that has proven itself against ISIS throughout the three-year campaign. President Trump may not particularly care about diplomatic niceties; in his mind, if Syrian Kurdish fighters are the most effective anti-ISIS force on the ground, the United States should be smart enough to deliver the weapons that they need.

4. Find, Fix, Finish: When Gens. Stanley McChrystal and Michael Flynn were in charge of special-operations forces and intelligence operations in Iraq and Afghanistan, U.S. operators would often launch a dozen raids against select terrorist targets every night. Vast quantities of intelligence were scooped up during these raids and quickly sent back to headquarters, where they would be analyzed and incorporated into future operations against other high-profile terrorists. The practice is referred to as F3EAD: find, fix, finish, exploit, analyze and disseminate. In short, find the target, kill or capture him, gather any information that you can find, determine if that information is reliable enough to act upon and, if so, use it to power the next operation. This system is credited with nearly destroying Al Qaeda in Iraq in 2010.

Mike Flynn, the man who helped pioneer the F3EAD concept, is now President Trump’s national security adviser—the person who often gets the last word with the president when all of the other cabinet members and advisers leave the room. Flynn could advocate for a return the F3EAD practice, reinforced with an intelligence surge whose sole objective would be destroying ISIS’s leadership structure from the ground up.

What option or combination of options will President Trump decide on? Is he willing to risk domestic political backlash by deploying thousands of additional U.S. soldiers to Iraq and Syria, which in all certainty would cause more U.S. casualties? Or will he continue his predecessor’s policy of outsourcing the fight to America’s local allies on the ground, perhaps with more resources and a greater pace of operations from the air? The new commander in chief has a lot to think about.