Hillary's Hawkishness Began When She Was First Lady 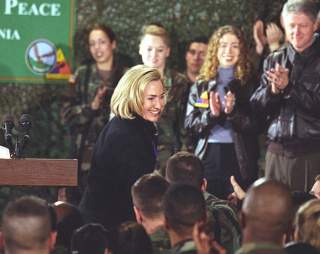 It’s no secret that Hillary Clinton favors a hawkish foreign policy. Her views seem out of step with the more dovish preferences of most rank-and-file members of the Democratic Party. And although there were many factors that led to the surprisingly strong challenge from Sen. Bernie Sanders during the primary, discontent among his supporters—especially his young supporters—about Clinton’s fondness for military force was high on the list of grievances. Antiwar Democrats recalled all too well that she supported George W. Bush’s disastrous military crusade in Iraq and retracted that approval only when it became obvious that the mission had unleashed catastrophic instability in the heart of the Middle East.

Concerns about Clinton’s hawkish inclinations are not merely confined to the Democratic left. Various experts have commented on them with more than a little concern. Some even regard her foreign policy track record and views as more dangerous than one could expect from the volatile Donald Trump.

Most of the concern stems from Clinton’s record as a senator and secretary of state. But one should look even earlier for signs of congenital hawkishness—her disturbingly casual attitude about the use of U.S. military force even when important American security interests are not at stake. Those attitudes were already evident in the 1990s, when Hillary Clinton was first lady and an informal adviser to her husband. Despite not holding an official policy position, she helped push the United States into the Balkan Wars. That was especially true of the 1999 Kosovo War, when she worked hand-in-glove with Secretary of State Madeleine Albright and other advocates of a hardline policy toward Serbia. Indeed, the American-led NATO airstrikes became a model for what Clinton sought to do in Libya more than a decade later—a supposedly cheap and effective military intervention that accomplished ambitious policy goals without putting large numbers of U.S. troops on the ground.

Hillary’s role in the Bosnia intervention remains murky. Given her later enthusiasm for “humanitarian” wars, it is likely that she pushed her husband to become more proactive in that conflict. On the other hand, until the sweeping GOP victory in the 1994 congressional elections, she had strong hopes for health care reform, and there is some evidence that she worried that a Bosnia intervention might be a fatal distraction for the administration and the nation. It should be noted though, that officials who were close allies of Hillary Clinton, most notably Richard Holbrooke, played an influential role in getting Washington to take the lead in the military intervention against the Serbs in 1995. At the same time, she helped ensure that Albright became Secretary of State in the second term of the Clinton administration.

There was no ambiguity about her position regarding Kosovo. She was virulently hostile to the Serbian government in Belgrade and extremely sympathetic to the rebel Albanian Kosovars. In her discussions with Bill Clinton, she later admitted, “I urged him to bomb.”  In the book Hillary’s Choice, author Gail Sheehy describes the tense exchange between the Clintons in detail. “On March 21, 1999, Hillary expressed her views by phone to the president: ‘I urged him to bomb.’ The Clintons argued the issue over the next few days. [The President expressed] what-ifs: What if bombing promoted more executions? What if it took apart the NATO alliance? Hillary responded: ‘You cannot let this go on at the end of a century that has seen the major holocaust of our time. What do we have NATO for if not to defend our way of life?’ The next day the President declared that force was necessary.”

There are two noteworthy aspects of that episode. First, Hillary Clinton was a far more eager warrior than her husband; one wonders what his decision might have been without her hawkish input. Second, her comment about “what do we have NATO for?” is reminiscent of Albright’s infamous comment earlier in the 1990s, when she screamed at Gen. Colin Powell, Chairman of the Joint Chief of Staff, “What is the point of having this superb military you’re always talking about if you can’t use it?” For both Albright and Clinton, the U.S. military seemed to consist of bloodless pawns—an instrument to be used for whatever grand venture they wanted to pursue, whether the nation’s tangible interests were involved or not.

The foreign policy views that emerged during her stint as First Lady in the 1990s were on full display when she became Secretary of State. The preference for supposedly humanitarian military intervention was expressed in both Libya and Syria. Libya’s Muammar Gaddafi and Syria’s Bashar al-Assad supplanted Serbia’s Slobodan Milosevic as the designated villains that must be removed from power. The same casual indifference to the wider consequences is also evident. Just as she still seems to ignore the reality that Kosovo is a political and economic basket case, Clinton is shockingly indifferent to the institutional and human wreckage left in the wake of pet policies in Libya and Syria. Her flippant comment about Qaddafi (“We came, we saw, he died.”) speaks volumes about her foreign policy. To this day, Clinton portrays the Libya intervention as a success, even though the country is now a cauldron of chaos and a target of opportunity for ISIS. And there is little doubt that if she becomes president, she will push for a much larger U.S. military footprint in Syria, despite similar risks. It is the policy she advocated before she left the State Department.

Hillary Clinton demonstrates that the bankruptcy of American foreign policy is a bipartisan problem. The gap between what members of the political elite, both Republican and Democrat, want this country to do in the world and what is in the best interest of the American people has never been wider.

Ted Galen Carpenter, a senior fellow at the Cato Institute and a contributing editor at the National Interest, is the author of ten books and more than six hundred articles on international affairs.