How Much Do Americans Really Fear ISIS? 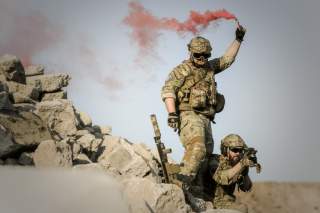 The horrific attack in Orlando by a man who pledged allegiance to the Islamic State once again has many Americans on edge and worried about terrorism. Yesterday CIA Director John Brennan amplified those concerns, telling the Senate Intelligence Committee that the Islamic State remains a dangerous threat “despite all of our progress against ISIL on the battlefield” and that “We judge that it will intensify its global terror campaign…” Referring to the gunman in Orlando, Brennan acknowledged that lone wolf attackers are “an exceptionally challenging issue.”

All that sounds pretty bad. So just how worried is the public about ISIS? Even though the question seems straightforward enough, the answer is more complicated than you probably think.

Public opinion polls are tricky. They look scientific, with percentages and confidence intervals and other fancy-sounding statistical terms. And yes, they seem to do a reasonable job predicting which candidate will win an election (though lately even that hasn’t been a sure thing). But as we move beyond simple questions and try to understand more complex attitudes like the fear of terrorism, polling’s usefulness becomes much more questionable.

Take the Orlando attack. The shooter, Omar Mateen, who was a Muslim, made critical statements about American culture and values and pledged allegiance to ISIS. Orlando was clearly a terrorist attack, right? Not so fast. A Gallup poll conducted immediately afterward found that only 48 percent of Americans thought it was more an act of Islamic terrorism than an act of domestic gun violence. The story gets even more complicated when Gallup reports that 79 percent of Republicans thought it was more terrorist attack than gun violence, but just 44 percent of Independents and 29 percent of Democrats thought so. When Americans can’t even agree on the core facts of the threat—what is or is not a terrorist attack, it makes gauging public attitudes about terrorism extremely difficult.

And consider what it tells us that Americans say they are more worried about terrorism than gun violence. A HuffPost/YouGov poll last December found that 64 percent felt it was more important to prevent terrorism than to prevent gun violence, even though terrorism has killed just twenty-nine Americans in the past decade and 132,349 have been killed by gun violence over the same period. But despite all the purported fear of terrorism, Americans don’t seem to have changed any of their habits. They still travel abroad, go out in public places like stadiums and nightclubs and spend money as if there is nothing to worry about.

Finally, let’s look at a survey question that casts doubt on the entire public opinion polling project. In late March of this year a TIPP/Business Investor’s poll asked people whether they agreed with the statement, “ISIS (Islamic militants operating in Syria and Iraq) is a serious threat to the existence or survival of the U.S.” Despite the ridiculous premise of the question—after all, the United States won World War Two and then outlasted the Soviet Union during the Cold War—77 percent of the respondents agreed with the statement.

There are two ways we can interpret this result. The first is to assume that people meant exactly what they said, that they believe ISIS actually threatens the very existence of the United States. If this is the case, then nothing the polls tell us is worth listening to because the American public has completely lost touch with reality. As strange as people can be sometimes, this explanation seems pretty unlikely.

That leaves the second possibility, which is that the public knows very well that ISIS does not represent an existential threat but is using the opinion poll to express other feelings and emotions. That sounds a little better, but it now puts us in the position of having to look at the answers to every single survey and trying to guess what questions people were really answering. In either case the polls seem a lot less useful than they appear on the surface.

Given all this, what should we make of the public’s feelings about ISIS and the threat of terrorism? What role should the polls play in guiding the government’s strategy? How should officials respond to the fact that 50 percent of the public now supports Donald Trump’s proposal to ban Muslims from entering the United States? Does half of the public really believe the ban is a good idea, or are those people simply expressing a general fear of terrorism and a desire that the government “do something” to cope with it?

The polls themselves can’t tell us, which leaves politicians and pundits, in the position of interpreting their meaning for us. There’s something we can all be worried about.

Trevor Thrall is a senior fellow at the Cato Institute and an associate professor at George Mason University in the School of Policy, Government, and International Affairs.
Image: Pixabay/Dariusz Sankowksi