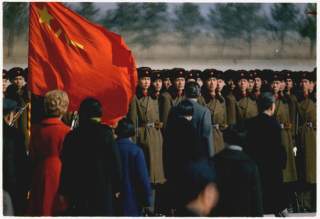 The New York Times editorial board has condemned the GOP’s new platform, just authorized at the Republican National Convention, as the “most extreme” in memory. This may well be the case, but the platform is also remarkable for something the Times does not comment on: belligerence and a new cynicism towards China. To show how this really is something new, this article reviews GOP platforms since Nixon’s rapprochement with China and traces the evolution thereafter of GOP disillusionment.

In 1972 the Republican platform boasted, “President Nixon’s visit to the People's Republic of China was . . . an historic milestone in his effort to transform our era from one of confrontation to one of negotiation.” Relations between the two countries were seen as promoting “an important contribution to world peace,” as the 1976 platform reaffirmed. Despite cultural and political differences, the relationship was based above all on “the need to maintain peace and stability in Asia” as the 1980 platform put it. In 1984, Republicans spelled out what they meant by the euphemistic “peace and stability”: “Despite fundamental differences in many areas, both nations share an important common objective: opposition to Soviet expansionism.” By 1988, when Reagan’s détente with the USSR was in full swing, the platform approved later that year cut out the anti-Soviet rhetoric, basing the U.S.–China relationship instead on “mutually beneficial trade,” and China’s continued economic and political opening up.

1992 heralded an important shift in the GOP’s position on China. Now without any Soviet threat, apparently no longer particularly pulled by the China trade, and certainly reeling from the disillusionment of Tiananmen, the new platform baldly and brusquely declared: “Our policy toward China is based on support for democratic reform. We need to maintain the relationship with China so that we can effectively encourage such reform. We will continue to work toward the day when the Chinese people will finally complete their journey to an open society, free of the deplorable restrictions on personal liberties that still exist.” GOP support for the U.S.–China relationship was solely focused on encouraging democratic reforms in China. The 1996 platform, which hardly mentioned China, concurred, even while promising—for the first time—“vigilance with regard to its military potential.”

The 2000 Republican Convention authorized a platform that put trade back on the agenda, leading the GOP to support China’s entry into the World Trade Organization (WTO). Even so, there was little optimism about China, which was called “America’s key challenge in Asia” and accused of proliferating weapons of mass destruction. Even so, the platform held out hope that China would still achieve a democratic transformation and promised that it would be welcomed into international society if it did. In 2000, the GOP saw China as an illiberal state, a growing security threat, and a valuable trading partner, but still not—overall—a particularly important country.

By 2004, the GOP platform took China much more seriously, offering more details than any platform since Nixon went to China. It is in this platform that the declaration—which since has become a mantra among U.S. government officials—appears: “We welcome the emergence of a strong, peaceful and prosperous China.” But there’s something important to understand here. This GOP welcome has always been conditional, as the following sentence from the 2002 National Security Strategy makes clear: “The democratic development of China is crucial to that future.” The democratic conditional was based on a syllogism that would be repeated for the next eight years: “Eventually, men and women who are allowed to control their own wealth will insist on controlling their own lives and their own country.” Economic freedom was step one; social and religious freedom had to necessarily follow, for freedom is “indivisible,” or so went the idea.

To the now-standard foundation of democratic transformation, the 2004 platform reemphasized the benefits of mutual trade and the wariness of China’s military power originally sketched in 2000. Unlike the United States, which remained committed to maintaining its worldwide network of military bases and unquestioned military supremacy, the U.S. defense platform declared, “In pursuing advanced military capabilities that can threaten its neighbors in the Asia-Pacific region, China is following an outdated path that, in the end, will hamper its own pursuit of national greatness.” In other words, do as we say, not as we do. As for trade, China’s entry into the WTO was promoting openness and the rule of law, while providing export opportunities for Americans. A good deal all in all. The platform, finally, emphasized the importance of cooperation with China on issues ranging from the war on terror to preventing proliferation in North Korea and stopping the spread of infectious diseases.

The 2008 platform was perfunctory in comparison to its predecessor four years earlier, repeating the mantra of welcoming a “peaceful and prosperous China” and “even more the development of a democratic China.” National greatness, it declared, cannot be achieved “while the government in Beijing pursues advanced military capabilities without any apparent need.” Alongside these supposedly unreasonable military expenditures, the platform condemned the “one-child” policy, the suppression of “basic human rights in Tibet and elsewhere” and the erosion of democracy in Hong Kong. Bilateral trade between the United States and China, however, was still held out as positive, and the GOP committed itself to ensuring China fulfilled its WTO obligations. The 2012 platform maintained almost precisely the same content, but with a more curt tone. The condemned “one-child” policy became “a barbaric one-child policy involving forced abortion”; China’s “WTO obligations” became “serious trade disputes” requiring a “firm response.” China’s “destabilizing claims in the South China Sea,” finally, were mentioned for the first time.

This background brings us to the just-announced 2016 GOP platform. No longer is China’s rise welcomed or even offered the “democratic conditional.” The language has taken a sharp turn. “China’s behavior has negated the optimistic language of our last platform concerning our future relations with China. The liberalizing policies of recent decades have been abruptly reversed, dissent brutally crushed, religious persecution heightened, the internet crippled, a barbaric population control two-child policy of forced abortions and forced sterilizations continued, and the cult of Mao revived.”

To add to this “Chinese reversal,” the platform condemns China for asserting “a preposterous claim to the entire South China Sea,” reclaiming islands, building “landing fields in contested waters” and “building a navy far out of proportion to defensive purposes.” All of these transgressions are said to be a result of “the complacency of the Obama regime” and its “unilateral approach to disarmament.” The platform finds particularly offensive China’s 2015 Victory Day parade, which celebrated the seventieth anniversary of China’s defeat of Japan in WWII, its first such celebration. To add to it all, “cultural genocide continues in Tibet and Xinjiang, the promised autonomy of Hong Kong is eroded, the currency is manipulated, our technology is stolen, and intellectual property and copyrights are mocked in an economy based on piracy.”

Notice the evolution of disillusionment in the GOP across the last forty-four years. The GOP of the 1970s was proud of restoring diplomatic relations between the United States and China and it valued China’s contribution to American security in the Cold War. As the Cold War dissipated, China was seen as a valuable frontier for trade. But beginning in 1992, the GOP made America’s relationship with China dependent on China’s democratic transformation. By 1996, as the GOP still waited for China to be transformed, it began to be seen as a potential military threat. This belief was codified in 2000 and 2004, but even so boosted trade relations (with China’s entry to the WTO) and cooperation in the War on Terror belied the party’s worries. The GOP platforms of 2008 and 2012 increasingly emphasized China’s military spending and human rights abuses, but still held out hope for the nation’s democratic development. By 2016, the GOP has given up hoping that China will democratize. Without this hope, the GOP platform has become totally disillusioned—even trade relations have been cast aside, for they are portrayed as benefitting only China. China is now understood to be a dangerous dragon that needs to be restrained by the might of a revived American military that possesses “vast superiority over any other nation or group of nations in the world.”

The irony of the Republican disillusionment is that the GOP inflicted it upon itself. Any sort of relationship that is based on the conditional “become like us and we’ll accept you” is bound to be unsteady. The Chinese never indicated they would—that was what the GOP told itself: after all, isn’t freedom “indivisible”? But even though the GOP’s democratic ideology has failed when it comes to China, it would still be foolish to allow disillusionment to distort reality, which is what has happened in the 2016 platform.

China’s contemporary course is much more mixed than the list of GOP indictments indicates. The platform declaims the “barbaric population control” of the “two-child policy of forced abortions and forced sterilizations” without so much as mentioning that the elimination of the “one-child” policy was a tremendous step forward and that most Chinese demographers (for example, Chen Wei of Renmin University) predict the coming end of population controls altogether. Forced abortions, furthermore, are illegal and rare in contemporary China; they are neither the norm nor the policy of the central government, as the GOP platform implies. Religious persecution is real, but it seems typically to be the policy of local or provincial governments, which explains why it is so sporadic; moreover, regardless of who directs it, such persecution is absolutely incomparable to what Christians suffered under Mao, where hundreds of thousands were killed during the Cultural Revolution. One could go on and on: “currency manipulation” has mostly become a slogan for the economically illiterate; in fact, as Arthur Kroeber shows, there is nothing particularly unusual or nefarious about it. China has long pursued its territorial claims in its littoral seas, just the U.S. didn’t seem to mind when, for example, China engaged in naval battles with Vietnam in 1974 or 1988. And finally, there is certainly nothing new about China cracking down on dissent or censoring the internet, as the GOP platform suggests.