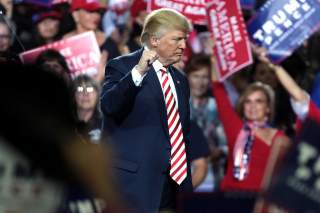 The “unthinkable” happened. The year that gave us Brexit and Filipino bandwagoning with China appropriately ended with Donald Trump being elected as the next President of the United States. I kept unthinkable within quote marks because none of the mainstream analysis predicted Trump’s win. It is of course important to avoid the trap of monocausality, as CNN listed a staggering twenty-four theories that are now being put forward to explain the rise and eventual win of Trump. While most of the theories presented are simplistic and socially linear and based on domestic variables and therefore extremely unlikely to explain such a complicated social phenomenon, it might certainly be true that all of them are equally, or in combination responsible for this result. However, that's for social scientists to analyze further.

The scope of this post is however, to assess the foreign policy implications of this momentous year, and to seek to understand if the post–Cold War order is indeed over, and if it is, what remains the most realistic way forward, not just for the United States, but the EU and the UK as well.

Some of the analysis remains implausible, even after the election, and it appears that a lot of them are drawing the wrong conclusions, and therefore falling into the same liberal loop that led to this outcome. There are cries of the end of the Western order, and that populists are out to destroy it from within, and therefore need to be resisted. There is panic on the European side as well. Questions are being raised on the competence of Trump and whether America is still the leader of the free world. There is outright indictment of Trump being an autocrat, and there are attempted causal understandings going as far as to make the case that Obama's “inaction” in Syria led to Trump.

The last interpretation especially cannot be further from the truth. There is a vast array of articles, mostly written by foreign policy realists (including yours truly) which highlight that it is a myth to claim that the United States didn't interfere in Syria. It is also patently untrue to deny that the destabilization of Libya, the constant interference in the Greater Middle East, and the destruction of the entire North African coastline and the resulting migration crisis is what led to this political backlash in Europe and United States. In fact, Pew surveys show that Americans, just as much as the majority of the Western public, wanted to do nothing in Syria and Libya.

The one thing that actually remains true, despite conventional wisdom, is that the Western public is extremely anti-interventionist and anti-immigration, and the ruling elites in the West on both sides of the Atlantic, remain woefully out of touch with the prevalent sentiment across their respective regions. In fact, a linear correlation can be drawn as to why the same people who supported Obama until 2012, turned and voted for Trump, and how much of Western interventionism post–Arab Spring and its material and psychological effects led to Brexit and beyond.

The question that now remains is, what’s next? In crude geopolitical terms, there are now two distinct currents, with a conservative isolationism permeating broadly in United States and a little less in the United Kingdom, and the liberal siege mentality growing in Brussels. Obviously, Trump is unlikely to totally upend the bipartisan U.S. foreign policy approach. In fact, the evidence thus far points completely to the opposite. President-elect Trump's transition team consists of veteran hawks and cold warriors who are, if anything, extremely critical of Obama's cautious approach. Some of the first leaders Trump called are an unusual bunch, which includes the heads of state of South Korea, Japan and Mexico. It can be assumed that these calls are a damage control exercise after Trump’s brutal campaign rhetoric. Trump highlighted that he wants a special relationship with both India and the UK, one a traditional ally, and another an important pivot partner since the post-Soviet collapse. Trump privately reassured Arab allies about the Muslim ban and removed it from his website. All this points to continuity rather than change.

However, if it takes Trump to get Europeans out of their complacent stupor, then that's not essentially a bad development, and it will, in the near future, be actually good for Europe. What is forgotten is that this anti-NATO sentiment is not something Trump suddenly developed. Bob Gates, by no definition an isolationist, warned NATO in 2011 that this backlash against Europe is inevitably going to happen if rich European countries continue to piggyback on U.S. taxpayers’ money, while atrophying their national security and defense, while continue to increase social spending. That threat was repeated by Ash Carter in early 2016. Unfortunately, nothing really happened, until now.

It is unlikely that the United States, led by Trump, will suddenly renege on American security commitments and alliance structures overnight. Geopolitical reality, converging and overarching trans-Atlantic interests, and simple structural great power rivalry will not let that happen. However, this might prove to be a shock and a much-needed recalibration for Western foreign policy. Ultimately, time will speak, but if Trump's win leads to even a little less mindless interventionism and value promotion, a bit more security burden sharing among rich Atlantic allies, and more interest-based foreign policy approach with other great powers, that's something that should be welcomed.

Sumantra Maitra is a doctoral researcher at the University of Nottingham, UK. His research is in great power politics and Neorealism. You can find him on Twitter @MrMaitra.