How U.S. Meddling in the Bosnia Conflict Changed the Face of NATO 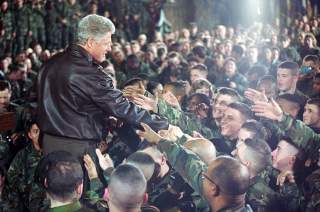 Miscalculations and outright blunders abound in U.S. foreign policy since the end of the Cold War. Some mistakes are obvious in retrospect and should have been at the time, most notably Washington’s elective war in Iraq and its devastating impact on Middle East stability. Only the Dick Cheneys of the world still contend that the Bush administration’s regime-change crusade was anything other than a calamity.

However, there have been other, less apparent, mistakes that produced highly negative outcomes. One of those blunders was U.S. policy toward the civil war in Bosnia during the mid-1990s. America’s entanglement in the violent disintegration of Yugoslavia was unfortunate on two levels. It was a missed opportunity in the vastly changed post–Cold War security environment for the United States to off-load responsibility for a subregional problem onto the European members of NATO. The way Washington ultimately handled the Bosnia conflict also created an unhealthy precedent. It transformed NATO from a purely defensive alliance designed to deter or repel an attack on its members into an organization with an offensive orientation. Specifically, in Bosnia the alliance projected military power against an insurgent movement and secessionist government that had not attacked or even threatened a NATO member.

As Yugoslavia began to unravel in the early 1990s, George H. W. Bush’s administration seemed inclined to let the leading European powers manage the situation. And those powers, especially Britain, France and Germany, did take some initiative, including working to get the feuding ethnic factions in the newly minted country of Bosnia-Herzegovina to work out a peaceful political solution. The centerpiece of that effort, orchestrated by the European Union, was the Vance-Owen plan, named for former British foreign secretary David Owen and former U.S. Secretary of State Cyrus Vance.

Yet even at that early stage, U.S. officials found it difficult to resist the temptation to meddle. The new Clinton administration spurned the Vance-Owen plan, and it sent subtle signals to Bosnia’s president—and the leader of the country’s Muslim faction—Alija Izetbegović to resist provisions of that plan. Emboldened, Izetbegovic then spurned the initiative, and the three-sided armed struggle among Bosnian Muslims, Croats and Serbs intensified.

When their mediation effort faltered, European leaders soon looked to Washington to take the lead in addressing the growing turbulence in Bosnia. U.S. leaders professed reluctance to do so, but that was little more than a pro forma objection. Their activist response was fast in coming and it reflected an underlying assumption (along with barely concealed contempt) that the Europeans were incapable of handling security challenges without robust American leadership. An anonymous, high-ranking Bush administration official epitomized that attitude when he sneered: “These people could not organize a three-car motorcade if their lives depended on it.”

The Clinton administration not only took the policy lead, it soon dominated the process. Washington insisted that Bosnia remain intact, and U.S. policy focused on suppressing the Croat and Serb secessionist campaigns. Clinton administration officials were especially determined to thwart the bid for independence by the Republika Srpska, the Serb entity that had gained control of nearly half of Bosnia’s territory and whose forces besieged the Muslim-controlled nominal national capital, Sarajevo.

Washington prodded its allies to adopt stronger anti-Serb measures, and that led eventually to the first use of military force in NATO’s history with the launching of air strikes against Bosnian Serb forces. That action produced a largely dictated peace agreement, the Dayton Accords, negotiated by U.S. Assistant Secretary of State Richard Holbrooke in November 1995. Although the agreement ended the bloodshed, it did not make Bosnia anything more than a pretend country ruled by a succession of international viceroys ruling primarily through arbitrary edicts. Bosnia was, and is, an economic basket case heavily dependent on international financial inputs. Worse, the deep ethnic divisions continued unabated, making effective political cooperation nearly impossible. Two decades after the civil war, Bosnia remains a dysfunctional, poverty-stricken ward of the international community.

The Bosnia conflict was a huge missed opportunity for the United States to set new, more rational, priorities for itself in the post–Cold War world. A far better policy would have been to inform the Europeans that a petty conflict in the Balkans did not reach the threshold of a serious security threat to the transatlantic community warranting direct U.S. involvement, much less requiring Washington’s leadership. NATO’s European members had no more right to expect a dominant U.S. role in dampening a Bosnian civil war than Americans would have had the right to expect European countries to take the lead in addressing a similar conflict in the Caribbean or Central America.

By usurping the leadership role, Washington perpetuated an unhealthy European dependence—and sometimes outright free riding—on U.S. security exertions. NATO burden-sharing controversies in both the Obama and Trump administration demonstrate that the problem continues to plague U.S. foreign policy. Moreover, the end product of the U.S.-designed policy in Bosnia has been a festering political and economic mess. In nearly every respect, the Bosnia intervention was Washington’s first major foreign-policy blunder of the post–Cold War era. It would, however, definitely not be the last.