How U.S.-Saudi Relations Got So Twisted 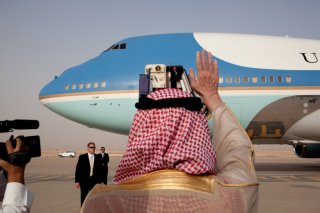 There is something rotten in U.S.-Saudi relations. It was probably unreasonable to think that a hereditary monarchy founded on a very conservative interpretation of Islam would regularly make common cause with a constitutional republic committed to secularism and individual liberty. But an always-awkward relationship has grown testy over the past fifteen years, and taken an even more ugly turn over the last two or three.

The latest tensions can be traced to sharp differences between the Saudis and the Obama administration over dealings in the Middle East, from how to handle the so-called Islamic State in Iraq and Syria, to different responses to the popular uprisings in North Africa and the Middle East. And then there is the Obama administration’s attempt to mend fences with Iran—Saudi Arabia’s bitter rival.

There is a lingering sense that the House of Saud’s decades-long funding of an extreme interpretation of Islam throughout the world has contributed to the rise of Islamic extremism, and even violence. And yet, the roots of actual terrorists’ rage and resentment, to say nothing of their theology, rarely trace directly to Saudi-funded imams or mosques, as the New York Times’ Scott Shane has reported. Meanwhile, the Saudis have battled both Al Qaeda and ISIS. The awkward fact that ISIS had adopted some of its ideas and practices from the Saudis elicited regret from a former imam of the Grand Mosque of Mecca.

So it would be wrong to blame the Saudis for ISIS. It does seem likely, however, that the Saudis, by promulgating their particular interpretation of Islam, have subtly shifted Muslim thought and teachings away from the liberalizing and tolerant brand that once flourished in most of the world—even, arguably, in the kingdom itself. According to Norwegian terrorism expert Thomas Hegghammer, “If there was going to be an Islamic reformation in the 20th century, the Saudis probably prevented it by pumping out literalism.” Another expert, Seyyed Hossein Nasr, a professor of Islamic studies at George Washington University, noted that an English-language version of the Quran distributed by the Saudis over the years included disparaging parenthetical references to Christians and Jews that were “a complete heresy, with no basis in Islamic tradition.”

That leaves the question of what, if anything, the U.S. government can do to change the nature and extent of Saudi proselytizing. Calling Saudi-funded Wahhabism “an insidious presence,” Farah Pandith, the former State Department official tasked with outreach to the global Muslim community, implored the world to take action. “We must get serious about destroying the ideological extremist narratives,” she wrote in the New York Times. “If the Saudis do not cease what they are doing, there must be diplomatic, cultural and economic consequences.” Her message may have been intended for nonstate actors and NGOs. After all, many would push back on the suggestion that the U.S. government “create imam training centers in Africa, Asia, Europe and North America that are free of Saudi funding and that offer a diversity of Islamic practices.”

For its part, the 9/11 Commission advised the United States against trying to reshape the theory and practice of a religion. “We must encourage reform, freedom, democracy, and opportunity, even though our own promotion of these messages is limited in its effectiveness simply because we are its carriers. . . . The United States can promote moderation, but cannot ensure its ascendancy. Only Muslims can do this” (see here, pages 375–6).

Here in the United States, public attitudes toward the Saudis, never very warm, have likely grown slightly cooler. The release of the blacked-out twenty-eight pages from a 2002 congressional investigation didn’t show a “smoking gun” of Saudi government complicity in the 9/11 attacks, but likely provided the impetus for the near-unanimous passage of the Justice Against Sponsors of Terrorism Act (JASTA). The legislation allows the families of 9/11 victims to directly sue the Saudi government. Where that all ends up is anyone’s guess.

There are limits, however, on how far members of Congress are willing to go in publicly criticizing the Saudis. My Cato colleague Emma Ashford wrote more about this here. And even though both chambers swiftly overrode President Obama’s JASTA veto, the Senate several weeks earlier had blocked a resolution concerning the sale of certain weapons to the Saudis, weapons that are being used with brutal effect in Yemen. The American people might not like the idea of Uncle Sam cozying up to oil-revenue-fueled autocrats, but they like the idea of oil-revenue-fueled genocidal maniacs (i.e., ISIS) and transnational terrorists (AQAP) even less. According to opponents of the resolution, including South Carolina Sen. Lindsey Graham, U.S. and Saudi interests often align.

“The Middle East is a very complicated place,” Graham said. “But . . . Saudi Arabia shared intelligence with us that’s made Americans safe. They have allowed us to use their air bases in time of conflict. They are all-in against ISIS and they are a great ally against the ambitions of the Iranians. To those who wish to sever this relationship, be careful what you wish for.”

In short, Saudi Arabia isn’t America’s best or most reliable ally, but support for maintaining ties with the kingdom remains high. The relationship was “complicated,” President Obama explained to The Atlantic’s Jeffrey Goldberg earlier this year.