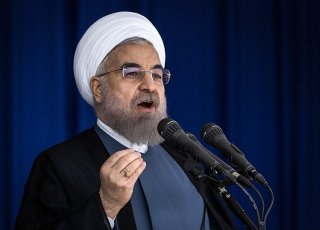 On the day the Iran nuclear deal was signed a year ago, the New York Times editorialized that it was “potentially one of the most consequential accords in recent diplomatic history, with the ability not just to keep Iran from obtaining a nuclear weapon but also to reshape Middle East politics.” Much has been written about the nuclear agreement’s capacity to curb Iran’s nuclear weapons capability both by those who support the agreement and those who are opposed to it. However, very little analysis has appeared regarding the deal’s potential to reshape the politics of the Middle East—especially the bilateral relations between Washington and Tehran. This article is aimed at addressing this latter issue.

But before I proceed with that task, let me emphasize that by all accounts, Iran has implemented its part of the deal, including plans to decommission the plutonium facility at Arak by removing the reactor core. Iran has already dispatched its low-enriched uranium to Russia and reduced the number of centrifuges installed at the Fordow and Natanz enrichment sites. These actions preclude any possibility of Iran taking either the uranium or the plutonium route towards the acquisition of nuclear weapons in the near future. The IAEA issued a verification in January 2016 to certify that met all its obligations under the nuclear agreement. Following this announcement, the European Union and the United States declared that they were lifting their nuclear-related sanctions against Iran.

However, the cumbersome and multilayered nature of U.S. sanctions—some established by executive order and others by Congressional resolutions—has delayed the sanction-lifting process. This is in stark contrast to the Europeans, the Russians and the Chinese who have been lining up in Tehran in anticipation of lucrative deals. But even these deals have been moving at snail’s space especially because of the foreign banks’ fear that they may run afoul of American sanctions imposed on Iran for other reasons, such as its missile program and human rights record. Therefore, the Iranian people still have yet to see the economic benefits of the nuclear agreement.

Moreover, U.S. procrastination and Washington’s proclivity to impose new sanctions on Iran for non-nuclear issues have played into the hands of hardline opponents of the treaty in Iran who use America’s foot-dragging as evidence of its insincerity in its dealings with Iran. This has undermined the moderate camp led by President Rouhani and Foreign Minister Javad Zarif, whose credibility is dependent on their being able to deliver real economic benefits in return for giving up nuclear weapons.

This reluctance is also shortsighted from the American foreign-policy perspective. It was clear to seasoned observers of the American-Iranian relationship that the agreement’s significance lay not so much in its success in curbing Iranian nuclear weapons capability as it was signalling that a sea-change in relations was around the corner. The deal was seen as precursor to a new alignment of forces in the Persian Gulf and the wider Middle East that would be based if not on a U.S.–Iran alliance then on their cooperation for mutually beneficial ends and that this would provide some degree of stability to the volatile region. Unfortunately, these expectations have not been met so far and this has been detrimental to both Iranian and American interests.

There are a number of reasons why this is the case. First, and most fundamentally, no lasting and legitimate structure of security in the energy-rich Persian Gulf can be established without the active cooperation between the preeminent global power, the United States and the pivotal regional power, Iran. Iran is the preeminent power in the Gulf, on the basis of demography, industrialization, indigenous technological capacity and educated workforce. Moreover, it has a battle-hardened military unlike most of its neighbors. Despite the fact that its Arab neighbors, such as Saudi Arabia and the UAE, have more modern military equipment that they have acquired from Western powers, they have never been tested in a major war.

Above all, Iran has demonstrated tremendous staying power under extremely trying circumstances, which is the hallmark of a major power with a strategic vision. A major reason why Iran was able to do so is that it has a long state tradition. It is the only state in the Middle East that has existed more or less within its present contours for over five hundred years. Having a stable Iran as a friendly power even if not an ally would be very beneficial for the United States in the long run, especially in a region where state failure has become almost a daily occurrence.

Secondly, there are several areas in the Middle East where American and Iranian interests overlap, and in some cases coincide. It has become increasingly clear recently that the United States is opposed to the breakup of Syria because it would create more problems than it would solve. Iran is also interested in preserving Syrian unity. Now that Washington has toned down its opposition to the Assad regime, there is much scope for coordination between American and Iranian policies to keep Syria whole and work out a transitional process that allows Assad and his supporters to have a role in Syria’s future dispensation.

The same applies to Iraq. Both the United States and Iran are committed to maintaining Iraqi unity. Moreover, the sectarian and other security problems in Iraq cannot be managed, let alone resolved, without cooperation between them. This is so because no government in Baghdad can last without American military support and Iranian political support. Even now, the United States and Iran are working in tandem in Iraq against the ISIS.

This brings me to my third reason. Both Tehran and Washington consider ISIS to be a principal threat to their security. American airpower is essential in defeating ISIS, but is not sufficient. Conquering and holding territory requires ground troops which the United States is unwilling to commit. Iraqi forces do not seem to be up to the job either. Iran has battle-hardened troops, especially the IRGC, in abundance and, by some accounts, is willing to commit them against the ISIS. It has also trained several Shia militias to fight ISIS in Iraq. Iran’s principal inhibition against deploying ground troops seems to be the apprehension that this would be seen as a hostile act by the United States and thus derail the fledgling process of American-Iranian rapprochement. A clear understanding, even if unwritten, between the United States and Iran on the deployment of Iranian ground troops in coordination with American air power could possibly spell doom for the ISIS’s caliphate.

It is instructive to note in this context that there is a clear difference between the ISIS’s (whose ideology is a hybrid form of Saudi Wahhabism) animosity toward the United States and Iran’s antagonism toward Washington. The former is based on a rigid religious ideology that considers all non-Muslims (and most Muslims too) as enemies. It is a real “us against them” syndrome that leaves only two options: victory or death.

Iran’s hostility toward the West was and remains fundamentally political in character. It is is in large measure a reaction to America’s and Britain’s role in the overthrow of Mossadegh in 1953 and the United States support for the hated Pahlavi monarch. This political antagonism was turned into a theological one when the Khomeini-led clerics hijacked the revolution in 1979 and used religious vocabulary to legitimize their rule. But the Iranian political elite is aware that the theological justification for anti-Americanism is just a veneer and consequently the Iranian-American relationship is not seen as a zero-sum game. This is why American and Iranian delegations could meet and discuss with civility their differences on the nuclear issue and eventually agree on a mutually acceptable resolution to the problem. The same negotiating model can be applied to other areas where there are differences between the two countries.

Now that the nuclear deal has reached its first anniversary, it is time to recognize that a fruitful relationship between the United States and Iran will serve the interests of both countries. Some would even go so far as to say that Iran is the United States’s natural partner in the strategically important Persian Gulf region. While this may be an exaggeration it would not be wrong to state that it is in America’s interest that Iran becomes a prosperous and normal member of the international community playing a role commensurate with its size and power in the Persian Gulf and the Middle East.