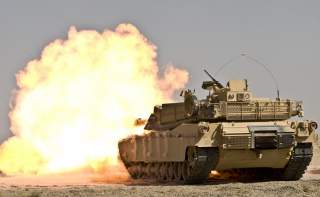 Iraqi Prime Minister Haider al-Abad was defiant. Addressing the Iraqi people in a nationally televised statement, Abadi declared that the military operation to liberate Mosul from the Islamic State has finally begun--and that--inshallah--it will be a quick and relatively bloodless success. "The hour has come and the moment of great victory is near,” Abadi said.

In terms of pure numbers, the Mosul offensive should be a cakewalk for the government. While the figures vary, common estimate are that approximately 30,000 pro-government forces will be matched up against 3,000-4,500 ISIL fighters who are under-equipped, demoralized from past setbacks on the battlefield, and largely isolated from bringing in reinforcements from Syria or other areas of Iraq. The offensive has been building up for weeks; shaping operations forty or fifty miles outside of the city’s limits have enabled the Iraqi army to gradually starve the terrorist group of resources. The capture of the Qayyara airfield was an especially noteworthy development — situated 40 miles south of Mosul, the airfield has seen truckloads of supplies and troop reinforcements shipped up from Baghdad and an influx of 600 additional U.S. advisers who will be responsible for mapping out targets and assisting the Iraqis who will actually be doing the fighting.

The fight for Mosul, however, is not simply about numbers. This is anything but a conventional fight, and how ISIL will react to tens of thousands of soldiers barreling towards them is anyone’s guess. Speaking to reporters at the State Department, special presidential envoy Brett McGurk didn’t even pretend to know the answer about what kinds of countermeasures ISIL might take to at least stall the Iraqis and make the job of retaking a city of 1-2 million people tougher. Air Force Col. John Dorian, the spokesman for CJTF-Operation Inherent Resolve, was confident enough to say that Mosul will be an “order of magnitude larger than the liberation of battles in cities such as Ramadi, Fallujah, and Sharqat,” where the population was either relatively homogenous in sectarian identity or small enough that the risk of civilian casualties was low.

There are indeed a lot of unknowns in this operation. The Iraqi security forces, which have been heavily assisted by U.S. airstrikes throughout the counter-ISIL campaign, are now being thrust in the middle of the international spotlight in a city that put Abu Bakr al-Baghdadi and ISIL on the map. The multi-ethnic and sectarian nature of the battle could potentially complicate how the offensive unfolds, whether there are hundreds of thousands of refugees who stream out of the city (a worst-case scenario that the U.N. is nonetheless preparing for), and how smoothly the post-liberation phase of the offensive will go once ISIL is extruded.

The fact that there are so many different entities involved in the same space — Kurdish peshmerga, Shia militias, Iraqi counterterrorism forces, Iraqi national police, and local Sunni fighters — is a recipe for internecine warfare or at least confusion. The establishment of a joint committee overseeing the offensive involving all of these groups, including the United States, is a welcome sign that Washington and Baghdad understand the stakes involved--and recognize that how Mosul is liberated is just as important as whether it’s liberated in the first place. Every entity, nominally fighting on the same side, needs to move according to plan and stay in their respective sectors.

Mosul will be liberated, there is no question. The ISIL of October 2016 is nowhere near the strength, power, or wealth of the ISIL of October 2014, when the group was literally scaring away Iraqi soldiers and police officers just by showing up in their black masks and unkempt beards. The organization’s finances, manpower, morale, territory, and luster as a jihadist movement have all declined precipitously over the past two years.  U.S. airstrikes and U.S. advisers backing up Iraqi army forces and peshmerga units on the ground has proven to be a winning combination, at least so far.

ISIL cannot win the battle for Mosul, but they can make the battle so slow and bloody that the Iraqi army is worn down, tired, and perhaps humiliated as a fighting force in front of its people. The last thing Baghdad and Irbil need is to make ISIL’s job even easier by failing to cooperate — both during the operation and the equally critical stage of reconstructing a devastated city.

Daniel R. DePetris is a fellow at Defense Priorities and a freelance researcher and a Middle East analyst at Wikistrat, Inc. He is a frequent contributor to the National Interest and a columnist at the Hill, Rare, and Quartz.