John Bolton Is Back. And So Are His Dangerous Ideas. 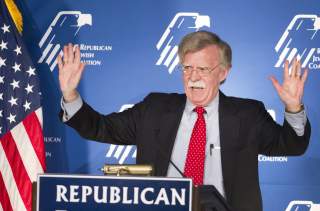 Or as the BBC put it: “President Donald Trump has appointed John Bolton, the former U.S. envoy to the UN, as his national security advisor, politically reanimating a strident Bush administration neo-conservative.”

But as many people have pointed out in the last twenty-four hours, Bolton isn’t really a neoconservative. Unfortunately, his brand of hawkish nationalism conforms far more closely to Trump’s own worst foreign-policy instincts. His elevation also brings to the fore a disturbing trend: the fault lines in the debate over U.S. foreign policy appear to be shifting. It’s no longer hawk versus dove, so much as openness versus autarky.

Many people associate Bolton with neoconservatives thanks to his hawkishness and his prior service during the George W. Bush administration. Birds of a feather, after all, tend to flock together.

But while Bolton shares the neoconservative tendency to use military force as a tool of first resort, he doesn’t necessarily share their enthusiasm for democracy promotion. Even this doesn’t completely distinguish him from neoconservatives, who were often happy during the Cold War to work with unpleasant authoritarian regimes so long as they actively opposed the Soviet Union.

Where Bolton diverges, instead, is his attitude towards nonmilitary engagement with the world. He is wary of international institutions, fearing that international law could eventually be turned on the United States. He is far closer to Trump on trade issues—arguing that China and other countries have deceptive trade practices which amount to “cheating”—and apparently favoring increased tariffs as a result. He even supported Trump’s travel ban, though his views on the broader question of immigration are less clear.

To put it a different way, the major fault line in U.S. foreign policy in recent years has been hawks versus doves. Throughout the Obama administration, the debate was typically whether the United States would intervene militarily overseas, whether it was for human-rights issues, counterterrorism, or pure security concerns. Viewed as part of that debate, Bolton may be extreme, but still advocates similar policies to neoconservatives (or indeed, to many liberal interventionists).

But another fault line in U.S. foreign policy has begun to resurface in recent years, one perhaps best characterized as engagement versus isolation in nonmilitary affairs. The crumbling of the long-running bipartisan consensus surrounding free trade is one worrying sign of this divide, as is the Trump administration’s very real focus on slowing or ending immigration, and his hostility to international institutions, friendly states, and even diplomacy in general.

Imagine a square box. One axis is military: hawkish versus dovish. The other is nonmilitary engagement: diplomacy, trade, immigration and cultural engagement versus autarky. Bolton belongs in the lower left quadrant: he’s extremely hawkish, but doesn’t want to engage much with the world on a nonmilitary level. A traditional neoconservative or Republican hawk would belong instead in the upper left: high levels of military activism and continued nonmilitary engagement.

In some ways, this is a distinction that those who seek a more restrained U.S. foreign policy have been making for years. Restraint is a grand strategy which advocates far less military engagement with the world but continuing economic and diplomatic engagement. Though some may choose to characterize this as “isolationist,” it is not. Isolationism would instead belong in the fourth quadrant, shutting off both military and nonmilitary engagement with the world, a policy almost no one actually advocates.

None of this is a new argument, of course. These fault lines have existed in U.S. foreign policy for generations. Indeed, the historian Walter Russell Mead has proposed a similar typology for U.S. foreign policy, though his mapping tends to focus more on economic versus ideological engagement. Nonetheless, he characterizes neoconservatives as Wilsonians, and restrainers as Jeffersonians.

Bolton, in contrast, is clearly a Jacksonian: comfortable with the use of military force, but less open to nonmilitary engagement with the world. This is a view largely shared by Trump himself. He might have railed against “stupid wars” and nation-building during his campaign, but he also backed the overwhelming use of force against ISIS, while threatening to rip up existing diplomatic triumphs like and withdraw American from key global trade deals.

Unfortunately, this all suggests that Bolton’s nomination is deeply worrying for a variety of reasons. He is far more likely to push Trump towards conflict on Iran, North Korea, and any number of other scenarios. And he is likely to indulge Trump’s worst impulses on tariffs and trade, diplomacy or immigration.

The bottom line is this: John Bolton might not be a neoconservative. But that’s no reason not to worry. The end result of Bolton’s tenure as national security advisor could easily be the same—or worse—than the neoconservatives’ track record.