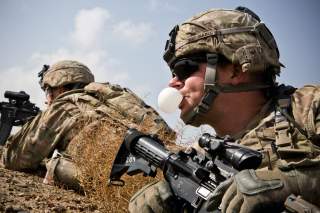 My friend and former Cato Institute colleague Matthew Fay recently published a paper on libertarian foreign policy, available online at Matt’s new intellectual home, The Niskanen Center. It is a thorough and well-written paper. He raises a number of issues about U.S. foreign policy that should be of interest to a wide audience, well beyond the relatively small circle of self-described libertarians.

I do have some issues with the paper, however. I offer these not as a defense of a single “correct” libertarian foreign-policy vision. I am just one libertarian, and I don’t pretend to speak for all of us. On the other hand, I am a foreign-policy scholar at the libertarian Cato Institute, and the author or coauthor of a number of publications that Matt called out in the paper—including my 2009 book, The Power Problem, and a Cato Institute study that I coauthored with Benjamin Friedman and published in 2010. It would be obtuse or disingenuous to suggest that I don’t represent the particular strain of libertarian foreign policy that Matt is criticizing.

At the core of Fay’s critique is the claim that libertarians should not advocate retrenchment from global alliances or for a substantial reduction of America’s permanent overseas military presence. Fay does not call for retaining all alliances. Citing Ted Galen Carpenter’s and Malou Innocent’s Perilous Partners: The Benefits and Pitfalls of America’s Alliances with Authoritarian Regimes, he admits that partnerships with “unsavory and authoritarian regimes . . . often sully America’s image abroad and undermine its leadership of a liberal international order.”

On balance, however, Fay believes that America’s alliances with most modern states serve American interests, and the cause of individual liberty. Drawing on arguments put forward by Dartmouth scholars Stephen G. Brooks and William C. Wohlforth, Fay argues that U.S. alliances confer benefits far greater than their costs. The alliances, and the troops and military assets undergirding them, reassure allies who might otherwise engage in risky arms races. The alliances and forward presence also facilitate economic cooperation, Fay explains. Restructuring the alliances that have been at the core of U.S. foreign policy for seven-plus decades, he writes, “could lead to a more conflict-prone world.”

Fay is correct to focus on war as the central motivating factor in libertarian foreign policy. War is the health of the state. State power grows during all crises, and especially during wartime. Measures to limit the use of force are, therefore, conducive to individual liberty.

Fay claims that U.S. foreign policy, as currently constructed—a variation of the deep engagement strategy that Brooks and Wohlforth advocate—is less likely to lead to war than the leading alternatives: restraint, put forward by several scholars, including especially MIT’s Barry Posen; or offshore balancing, called for by John Mearsheimer and Stephen Walt, among others.

The world has witnessed a number of small wars since the end of the Cold War, each cruel and catastrophic in their own way, but none approaching the global conflagrations of the first half of the twentieth century. If one believes that U.S. military power, and U.S. military alliances, are the leading—or even a major—factor in this relatively happy state of affairs, it would be foolish to try something else.

But Fay’s foreign policy of engagement suffers from many of the same problems as Brooks and Wohlforth’s deep engagement, just as their prescription shares many of the flaws of an increasingly active and aggressive foreign policy, what they call “deep engagement plus.” It all comes back to how many wars the nation fights, and for what purpose. And the United States fights more wars under deep engagement than it would if it adopted a more restrained foreign policy, and far more than it did throughout most of history. My colleague John Glaser estimates that the United States has fought more wars in the last twenty-eight years than it did in the first 190 years.

The United States fights wars for many reason, including to show “leadership,” and on behalf of its allies. Such wars are intended to reassure them, to signal an ironclad American commitment to the security of others, even when America’s own security is not imperiled. The Libyan war in 2011 is a particularly notorious case. America’s willingness to wage war on behalf of others enhances the credibility of its extended deterrent threats—its pledge to treat an attack on others as though it was an attack on America.

To be sure, such wars often do not have the intended reassuring effect. We should ponder that reality as well. Many U.S. allies looked on in horror as the United States blundered into a ruinous war in Iraq. The war in Afghanistan drags on, meanwhile, and many U.S. allies have contributed troops or other resources to the fight. But the war is unpopular in many of these countries, resulting in restrictions and caveats on how the troops are employed, and therefore limiting their effectiveness.

Conceding that some of these wars don’t advance liberal ends, Fay contemplates an array of measures that might “discourage the promiscuous use of military force,” but he also admits that it will be an uphill battle. Even if we fought fewer wars, however, Fay would have us maintain a larger and more active military than called for by restraint or offshore balancing in order to prevent a future threat from materializing.

But maintaining a massive national-security apparatus in anticipation of an uncertain tomorrow is a threat to limited government and individual liberty today. Maintaining such an apparatus in order to discourage other countries from defending themselves merely compounds the problem. It creates a federal government that is unnecessarily large and insufficiently accountable, a military that is unnecessarily active, and a populace that is unnecessarily motivated to wreak vengeance on distant peoples that harbor no particular animus towards us (the indifference of Americans to the suffering of Iraqis or Yemenis pummeled by U.S. and allied air power is merely the latest manifestation of this phenomenon).

To be sure, there is much in Fay’s approach to foreign policy that I find commendable. I would particularly echo his concerns about Donald Trump’s bellicose, big-stick foreign policy, which has precious little to recommend to libertarians. And I share his desire to create additional ways to constrain the use of American military power. Above all, I welcome fresh perspectives on U.S. foreign policy, and look forward to engaging Fay’s arguments at greater length in the future.