Libya Is a Failed State (and It's America's Fault) 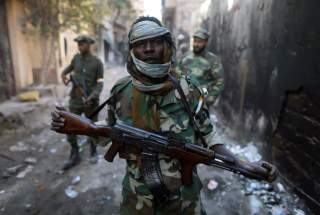 When the Obama administration led a 2011 NATO military intervention on behalf of rebels seeking to overthrow Libyan dictator Muammar el-Qaddafi, there was considerable optimism that the move would produce a much better country. Although U.S. officials and their media cheerleaders acknowledged that significant challenges remained for a post-Qaddafi Libya, they argued that the outcome could scarcely be worse than the oppressive status quo. Events over the past six years have proven their assumptions spectacularly wrong. Libya is now a cauldron of turmoil and Islamic radicalism.

As Qaddafi’s rule teetered, optimism in U.S. political and journalistic circles was pervasive. “Tripoli is slipping from the grasp of a tyrant,” President Obama stated in August 2011. “The people of Libya are showing that the universal pursuit of dignity and freedom is far stronger than the iron fist of a dictator.” Senators John McCain and Lindsey Graham were equally gratified and positive. “The end of the Gadhafi regime is a victory for the Libyan people and the broader cause of freedom in the Middle East and throughout the world,” they concluded. The two senators, along with their Republican colleagues, Mark Kirk and Marco Rubio, gushed during a visit to “liberated” Tripoli that the rebels had “inspired the world.”

In his remarks regarding the dictator’s capture and gruesome death in October, Obama asserted that “the dark shadow of tyranny has been lifted” from Libya. He urged the citizens of that country to “build an inclusive and tolerant and democratic Libya that stands as the ultimate rebuke” to the former oppressor. Ivo H. Daalder, the U.S. ambassador to NATO, and Adm. James Stavridis were equally enthusiastic. Describing the intervention as “an extraordinary job, well done,” they called it “an historic victory for the people of Libya who, with NATO’s help, transformed their country from an international pariah into a nation with the potential to become a productive partner with the West.”

Much of the American news media chimed in about the glorious outcome of the U.S.-NATO intervention. New York Times columnist Nicholas Kristof was euphoric about how the people he encountered in Libya loved America. “Americans are not often heroes in the Arab world, but as nonstop celebrations unfold here in the Libyan capital I keep running into ordinary people who learn where I’m from and then fervently repeat variants of the same phrase: Thank you, America!”

There were only a few dissenting voices from the celebration. Journalist Glenn Greenwald, writing in Salon, expressed his astonishment and dismay at the lack of realism or even minimal skepticism on the part of policymakers.

I’m genuinely astounded at the pervasive willingness to view what has happened in Libya as some sort of grand triumph even though virtually none of the information needed to make that assessment is known yet, including: how many civilians have died, how much more bloodshed will there be, what will be needed to stabilize that country and, most of all, what type of regime will replace (Moammar) Gadhafi?

A little more than three years later, the United States conducted a new round of airstrikes to prevent the establishment of an Islamic State (ISIS) beachhead in the Mediterranean coastal city of Sirte. ISIS infiltration already was becoming evident in late 2014 and early 2015. An early sign of the terrorist group’s presence was a mass beheading of twenty-one Egyptian Coptic Christians who had migrated to Libya to find work.

The new U.S. intervention came at the invitation of the so-called unity government, a splicing of two previously feuding regimes, which had received official UN backing. The reality is that despite its name, the “unity government,” also known as the Government of National Accord, or GNA, is just one of several factions jockeying to govern Libya. Indeed, at the time the United States commenced its new air campaign, there were (and remain) three rival governments seeking control. A parliament-backed faction, the Tripoli-based General National Congress, also known as Libya Dawn, is closely allied to Islamist fighters, especially the powerful Misrata militia. A key rival to both claimants is the House of Representatives (HoR)—sometimes called the Council of Deputies—which is based in Tobruk. Gen. Khalifa Hiftar, who had led one of the rebel factions that unseated Qaddafi, is the de facto leader of the HoR.

But even that tripartite feud does not capture the full extent of the chaos. An October 2017 incident illustrates just how convoluted the political and military rivalries have become. An air strike killed at least fifteen civilians in the eastern city of Derna, located about 165 miles west of the Egyptian border. At the time of the attack, Derna was controlled by a coalition of Islamist militants and rebel veterans known as the Derna Mujahideen Shura Council (DMSC), one of the numerous political/religious factions in the country. The source of the airstrike was unclear. The coastal city had long been under siege by the eastern-based Libyan National Army (LNA) (General Hiftar’s armed wing), which previously conducted air strikes against it, as had Egypt, which backs the LNA.

However, both the LNA and the Egyptian government denied carrying out the most recent raid. Indeed, Egypt’s foreign ministry issued a statement condemning the strikes for killing innocent civilians. One Egyptian TV station with close ties to the Cairo government insisted that Libyan planes had conducted the attack. The LNA, though, denied that assertion and said there had been a “terrorist attack” in the area. The Tripoli-based, UN-backed government, which opposes the LNA and maintains very loose ties with the DMSC, denounced the air strikes and announced three days of mourning.

Even that was not the extent of the murky, multisided struggle, however. The DMSC had controlled Derna since 2015. It achieved that status by expelling ISIS, which had established a foothold there the previous year. In other words, one militant Islamic group drove out a rival militant Islamic group. Such is the nature of political and military affairs in fractured, post–Qaddafi Libya.

The chaos has strengthened Islamic extremism inside Libya and led to massive refugee flows across the Mediterranean—a humanitarian nightmare rivaling the one taking place in Syria. Proponents of U.S.-led regime-change wars have yet another catastrophic failure on their record.