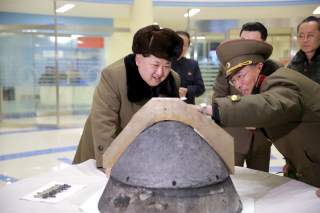 The United States and its allies continue to cajole and threaten North Korea to negotiate an agreement that would relinquish its growing nuclear and ballistic-missile programs. The latest verbal prodding came from President Trump during his joint press conference with South Korean president Moon Jae-in. Trump urged Pyongyang to “come to the negotiating table,” and asserted that it “makes sense for North Korea to do the right thing.” The “right thing” Trump and his predecessors have always maintained, is for North Korea to become nonnuclear.

It is unlikely that the DPRK will ever return to nuclear virginity. Pyongyang has multiple reasons for retaining its nukes. For a country with an economy roughly the size of Paraguay’s, a bizarre political system that has no external appeal, and an increasingly antiquated conventional military force, a nuclear-weapons capability is the sole factor that provides prestige and a seat at the table of international affairs. There is one other crucial reason for the DPRK’s truculence, though. North Korean leaders simply do not trust the United States to honor any agreement that might be reached.

Unfortunately, there are ample reasons for such distrust. North Korean leaders have witnessed how the United States treats nonnuclear adversaries such as Serbia and Iraq. But it was the U.S.-led intervention in Libya in 2011 that underscored to Pyongyang why achieving and retaining a nuclear-weapons capability might be the only reliable way to prevent a regime-change war directed against the DPRK.

Partially in response to Washington’s war that ousted Iraqi dictator Saddam Hussein in the spring of 2003, ostensibly because of a threat posed by Baghdad’s “weapons of mass destruction,” Libyan leader Muammar el-Qaddafi seemed to capitulate regarding such matters. He reconfirmed his country's adherence to the Nuclear Nonproliferation Treaty in December of that year and agreed to abandon his country’s embryonic nuclear program. In exchange, the United States and its allies lifted economic sanctions and pledged that they no longer sought to isolate Libya. Qaddafi was welcomed back into the international community once he relinquished his nuclear ambitions.

That reconciliation lasted less than a decade. When one of the periodic domestic revolts against Qaddafi’s rule erupted again in 2011, Washington and its NATO partners argued that a humanitarian catastrophe was imminent (despite meager evidence of that scenario), and initiated a military intervention. It soon became apparent that the official justification to protect innocent civilians was a cynical pretext, and that another regime-change war was underway. The Western powers launched devastating air strikes and cruise-missile attacks against Libyan government forces. NATO also armed rebel units and assisted the insurgency in other ways.

Although all previous revolts had fizzled, extensive Western military involvement produced a very different result this time. The insurgents not only overthrew Qaddafi, they captured, tortured and executed him in an especially grisly fashion. Washington’s response was astonishingly flippant. Secretary of State Hillary Clinton quipped: “We came, we saw, he died.”

The behavior of Washington and its allies in Libya certainly did not give any incentive to North Korea or other would-be nuclear powers to abandon such ambitions in exchange for U.S. paper promises for normal relations. Indeed, North Korea promptly cited the Libya episode as a reason why it needed a deterrent capability—a point that Pyongyang has reiterated several times in the years since Muammar el-Qaddafi ouster. There is little doubt that the West’s betrayal of Qaddafi has made an agreement with the DPRK to denuclearize even less attainable than it might have been otherwise. Even some U.S. officials concede that the Libya episode convinced North Korean leaders that nuclear weapons were necessary for regime survival.

The foundation for successful diplomacy is a country’s reputation for credibility and reliability. U.S. leaders fret that autocratic regimes—such as those in Iran and North Korea—might well violate agreements they sign. There are legitimate reasons for wariness, although in Iran’s case, the government appears to be complying with its obligations under the Joint Comprehensive Plan of Action that Tehran signed with the United States and other major powers in 2015—despite allegations from U.S. hawks about violations.

When it comes to problems with credibility, though, U.S. leaders also need to look in the mirror. Washington’s conduct in Libya was a case of brazen duplicity. It is hardly a surprise if North Korea (or other countries) now regard the United States as an untrustworthy negotiating partner. Because of Pyongyang’s other reasons for wanting a nuclear capability, a denuclearization accord was always a long shot. But U.S. actions in Libya reduced prospects to the vanishing point. American leaders have only themselves to blame for that situation.

Ted Galen Carpenter, a senior fellow in defense and foreign-policy studies at the Cato Institute and a contributing editor at the National Interest, is the author or coauthor of ten books, including The Korean Conundrum: America’s Troubled Relations with North and South Korea. He also is the author of more than seven hundred articles and policy studies on international affairs.