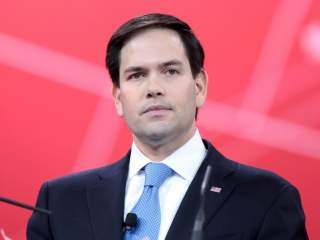 Judging from pundits and partisans on both sides of the Trump vs. #NeverTrump divide, the race for the GOP nomination may be decided once and for all over the course of the next seven days. At least some Republican Party leaders have already thrown in the towel. “It’s too little, too late,” one unnamed GOP official said to Politico concerning the latest flurry of activity aimed at denying Donald Trump the nomination.

Trump’s looming victory, or merely the prospect of it, means that the window is fast closing on the neoconservative establishment’s efforts to secure the GOP nomination for its favorite son: Marco Rubio. If the Florida senator fails to win his home state next week, the neocons will be forced to look elsewhere. Many are likely to jump ship entirely, throwing their support to Hillary Clinton, a move that will have profound repercussions long after the final votes are cast in election 2016.

Rubio’s struggles reveal the limits of the neocon’s political acumen. Meanwhile, their willingness to attack the GOP front-runner—and to switch party loyalties entirely if they don’t get their way—reveals the limits of their never-strong commitment to the GOP.

Many factors explain Rubio’s inability to win support beyond the Washington Beltway, but lack of funding isn’t one of them. According to the New York Times, as of late last month Rubio’s own campaign and various PACs had raised at least $84.6 million, and spent nearly $61.1 million. And the Hill reported that the PACs behind the anti-Trump movement, including the American Future Fund and the Club for Growth, would spend over $3.25 million in Florida in the coming week. Meanwhile, the pro-Rubio “Conservative Solutions PAC” has reportedly received an infusion of $10 million.

But as with other well-funded candidates (see e.g. Jeb Bush), the voters’ deep anti-establishment sentiment has so far been unaffected by the establishment’s prodigious spending. If anything, it has made it worse. That Rubio is failing even in his home state suggests the depths of the public’s sour mood.

And yet, with his back against the wall, Rubio has gone to the establishment well once again, unveiling a new foreign policy advisory council populated chiefly by refugees from other failed campaigns. The move doesn’t merely reveal the limits of Rubio’s imagination; it also laid bare the extent to which the GOP foreign policy apparatus relies on the neoconservative network that begat the Iraq war and its ignominious aftermath.

Rubio’s campaign slogan, A New American Century, is lifted from the name of the neoconservative think tank founded in 1997 by Bill Kristol and Robert Kagan: The Project for a New American Century. Eliot Cohen, one of the organizers of the Stop Trump open letter, signed eight of thirteen PNAC open letters, including its original Statement of Principles. PNAC quietly disbanded in 2006 or 2007, but reemerged as the Foreign Policy Initiative, founded and populated by some of the leaders of PNAC (Kagan and Kristol both serve on its board of directors). Jamie Fly, Rubio’s chief national security advisor, was FPI’s executive director from 2009 until early 2013.

“Rubio’s late push on foreign policy may not save his campaign. Polls show that foreign policy is among the top concerns of voters, but Republican voters clearly favor outsiders over the establishment this cycle.”

The editors of Florida’s Sun Sentinel agreed. Refusing to endorse any of the remaining four GOP candidates, the editors observed, “Rubio's strongest suit appears to be foreign policy, but his neoconservative views should give voters pause.” They were particularly alarmed that Rubio would “so cavalierly roll the dice” on a “war with Russia,” the likely outcome of his proposal for a no-fly zone over Syria that would take down Russian jets. They concluded, harshly, “Rubio lacks the experience, work ethic and gravitas needed to be president.”

In short, what the neocons see as one of Rubio's key selling points (beyond his good looks and ability to deliver sound bites) may be his main vulnerability.

Rubio's supporters claim that he's more electable in a general election, pointing to his relative youth, inspiring personal story and telegenic visage. But Rubio is a mere six months younger than Ted Cruz, and he's hardly the last man standing who can point to humble roots. Meanwhile, there is a fine line between "looks good on TV" and "empty suit," a line that Rubio appears to have crossed in the minds of many voters after his disastrous Rubio-bot moment in the final debate before the New Hampshire primary. Pre-debate polls showed Rubio poised to do well after his expectation-busting third-place finish in the Iowa caucuses. The fresh face allegedly had #Marcomomentum on his side. Instead, he finished a disappointing fifth, with just over 10 percent of the vote. He has since managed to win only two of twenty contests.

For many Rubio supporters, none of this matters. They aspire to a head-to-head matchup with Trump, in which the "anybody but Trump" factions coalesce behind their chosen candidate. They cheer his foreign policy views, and believe that, if he is elected, he will successfully implement the Bush Doctrine—something that even George W. Bush failed to do. But he'll have to get elected, and Rubio has yet to prove that those apparently sincere beliefs -- for example, about boosting military spending by $1 trillion or more, and pushing an aggressive overseas agenda to promote “America’s core values”—are popular with the public at large.

In short, if Rubio loses the nomination to a political novice and a different type of empty suit (Google "Donald Trump" and "nuclear triad"), it might be the clearest sign yet that his (and the neocons’) foreign policy views are a political liability. And if Trump ultimately prevails, that will be a clear—and tragic—sign that the public at large has turned its back not merely on the neocons’ reckless wars, but also on the peaceful international engagement that was the touchstone of U.S. foreign policy for over a century, but that Kristol and Kagan scorned as synonymous with “cowardice and dishonor.”

Within a week, we will know whether the neoconservatives’ latest gambit has succeeded or failed. If Marco Rubio can't carry Florida, his aura of electability will be shattered once and for all.

What happens next is anyone's guess, but some of Rubio’s supporters will hold their noses and get behind Ted Cruz, the man so loathsome that Sen. Lindsey Graham last month said “If you killed Ted Cruz on the floor of the Senate, and the trial was in the Senate, nobody would convict you.” A week later Graham had warmed up to the idea of Cruz as party standard-bearer, openly suggesting that he would, in the end, support Cruz if that is what it took to stop Trump.

But many of Rubio’s hard-core supporters will return to the party of their roots: The Democratic Party.

That this is even a possibility strikes some as newsworthy. It shouldn’t. Hillary Clinton agrees with the neoconservatives on a number of foreign policy issues and, as Michael Lind points out, a lot else. Neocons were never fully onboard with the fiscal conservatism of traditional conservatives and libertarians, and they merely tolerated the social conservatism of the Religious Right, chiefly because that movement provided the necessary foot soldiers to help elect their preferred candidates.

The real mystery isn’t why the neocons would return to the Democratic Party if the GOP were to nominate a skeptic of foreign intervention. Given the profound tensions on the right between the statist neoconservatives, and the small-government movement conservatives, the wonder is that they stayed in the GOP so long.

If the neoconservatives do bolt the GOP, a new conservative foreign policy might congeal around prudence, self-reliance and restraint. And if the neocons seek to fasten themselves once again to the GOP in four or eight years, after having helped elevate Hillary Clinton to the presidency, no one should be surprised if Republicans aren’t anxious to let them back in.

Christopher A. Preble is vice president for defense and foreign policy at the Cato Institute and the author of The Power Problem: How American Military Dominance Makes Us Less Safe, Less Prosperous, and Less Free.