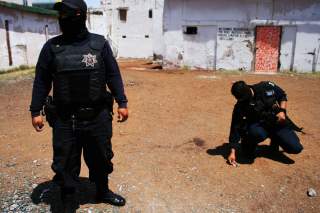 The horrific drug violence that plagued Mexico during Felipe Calderon’s presidency (2006–12) receded just modestly following the election of his successor, Enrique Peña Nieto. Moreover, that trend lasted less than three years. Already in 2015, there were signs of a resurgence of the carnage. By December 2016 the bloodshed had claimed one hundred thousand lives since Calderon first called on the military to take the lead role in trying to suppress the drug cartels a decade earlier. In addition, more than thirty thousand people were missing, and many of them also were likely casualties of the fighting among rival cartels and between the cartels and government forces.

Matters have grown even worse in 2017. More than two thousand people were killed in January, and a similar total occurred in March. That toll, if it continues, would exceed the rate during the worst years of the Calderon administration. A new report from the University of San Diego’s Justice in Mexico program documented the growing violence in several Mexican cities, especially Tijuana and Acapulco. The latter now has a homicide rate of 128 per one hundred thousand people. That compares to a rate of twenty-eight per one hundred thousand in Chicago, one of America’s more notoriously dangerous cities.

There is little doubt that the turf fights between rival drug cartels account for a large portion of Mexico’s alarming violence. David Shirk, the director of the USD program, estimates that 30–50 percent of the killings are attributable to that factor. And the total does not include the fatalities from shootouts between drug dealers and Mexican security forces, both police and military.

The spike in violence coincides with the removal of Joaquin (El Chapo) Guzman Loera, the head of the Sinaloa Cartel, which under his leadership had become, by far, Mexico’s most powerful drug trafficking operation. After running the cartel for fourteen years following his escape from a maximum security prison in 2001, Mexican authorities captured him in February 2014. That setback didn’t seem to jeopardize his hold on the leadership of the cartel or Sinaloa’s preeminent position in the illegal drug trade. He escaped again in July 2015, but this time his freedom lasted only until January 2016. And there would be no third escape, since Mexico extradited him to the United States in January 2017.

El Chapo’s final capture created a power vacuum in Mexico’s ruthless drug trade. The USD report notes that the killings began to edge upward in 2015 when Guzman was briefly back in custody. It dipped slightly when he escaped, and “then rose noticeably with his recapture and extradition.” That was not surprising, since his removal triggered leadership rivalries within the Sinaloa organization, and it opened the gates for competing cartels to encroach on Sinaloa’s turf.

Mexican and U.S. law enforcement officials were strangely oblivious to those predictable consequences. The Drug Enforcement Administration called the arrest “a significant achievement in our shared fight against transnational organized crime, violence and drug trafficking.” Attorney General Loretta Lynch hailed it as “a vindication of the rule of law in our countries” and a blow to the drug-trafficking cartel Guzman led. Chicago Tribune columnist Steve Chapman noted at the time that U.S. officials also had celebrated the capture or killings of previous drug lords, but those “victories” had little effect on the flow of illegal drugs from Mexico into the United States, the leading consumer market. The main impact was to increase the number of killings as the drug gangs waged turf wars and sorted out market share.

That pattern has continued and even intensified following Guzman’s fall. Existing trafficking operations, such as the Gulf Cartel and Los Zetas, which Sinaloa had outmaneuvered and weakened, have reasserted themselves. They have also become more aggressive in responding to government operations directed against their leaders. New entrants into the drug trade, especially Cartel Jalisco Nueva Generacion, have triggered even more violence. Indeed, the Cartel Jalisco Nueva Generacion seems to be significantly more ruthless than even Sinaloa or Los Zetas—both with respect to rivals and the authorities.

These developments underscore again that a policy of drug prohibition simply drives the trade into the hands of the most odious criminal elements. Unfortunately, U.S. leaders have failed to learn that basic lesson, opting instead to persist with a policy that has failed spectacularly for decades. Indeed, the Trump administration seems determined to redouble U.S. efforts to enforce prohibition, among other things, arguing that the proposed border wall with Mexico will keep drugs out of the United States. Officials are contemplating tougher domestic enforcement measures, including against the mildest drug, marijuana. Attorney General Jeff Sessions and other drug warriors insist that federal prohibition laws should prevail even against the wishes of those states that have legalized the drug

Not only will American recreational drug users be the victims of such a myopic policy, but the Mexican criminal cartels will celebrate as they continue to wage an armed struggle to dominate the lucrative trade in that drug and others. The already alarming carnage south of the border is likely to get worse.

Ted Galen Carpenter, a senior fellow in defense and foreign policy studies at the Cato Institute and a contributing editor at the National Interest, is the author of ten books on international affairs, including Bad Neighbor Policy: Washington’s Futile War on Drugs in Latin America (Palgrave Macmillan, 2003) and The Fire Next Door: Mexico’s Drug Violence and the Danger to America (Cato Institute, 2012).

Image: Mexican federal police officers examine evidence of a mass shooting that took place outside at a popular Juárez bar in April 2010. Maggie Ybarra/Used by permission