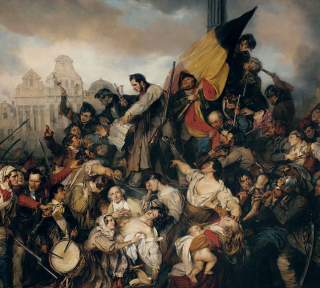 Much of the post-Brexit and primary election conventional wisdom seems to be stuck in a political narrative in which the Brexit vote and the rise of Trumpism in the United States are seen as symbols of the populist revolution. These symbols are combined with a nationalist tide has been sweeping not only the United Kingdom and the United States, but also many other parts of Europe, including Poland, Hungary, France, The Netherlands and Scandinavia, not to mention, Russia, Turkey, India and Israel.

According to this narrative, economic insecurity and cultural anxiety that reflect sociodemographic trends have given momentum to ethnonationalism and religious separatism in both the United States and the United Kingdom. The Rust Belt is pitted against New York City, and the Midlands against London.

The aging blue-collar workers and residents of the rural areas, remnants of the shrinking white English tribe—patriotic, God-fearing and hardworking—have lost their jobs in the declining manufacturing industries the never recovered from the Great Recession. They feel that they have been economically squeezed by the forces of globalization that are being promoted by the political and economic elites in New York and London, that they are culturally marginalized and threatened by nonwhite immigrants who are “taking over” their country, and that secular liberal elites are responsible for the cultural decadence that is supposedly inflicting their societies.

At the same time, gigantic metropolitan areas have been growing and prospering thanks to globalization and immigration: a flourishing globalized service economy; a concentration of young and educated professionals; immigrants that are mostly integrated into open societies; tolerance of the other and accommodation of changes in cultural mores, like same-sex marriage; a demographic balance that is swinging in the direction of unmarried men and women, the young and the purveyors of the “cognitive economy”, rather than those with large families, the old and industrial workers.

Ironically, both the fans and the critics of globalism share versions of this narrative. The first are bashing the ignorant, nativists, racists and xenophobic voters who are allegedly trying to place obstacles on the way of the forces of political, economic and social change and progress. The latter counter that “the people” are winning the day by protecting their national sovereignty and re-embracing their national identity while challenging corrupt elites that are protecting their own political and economic interests.

In way, both side to this debate are warning that we are slipping into nightmare scenarios. The globalists believe that Britain exiting the EU and Donald Trump occupying the White House are the harbingers of things to come: Mussolini’s brown-shirts are on their way; and we all know who is going to show in the not-so-distant future. Could it be…the Grand Wizard of the Ku Klux Klan? Or maybe Hitler?

Mirror-imaging this vision of hell on Earth, nationalists predict that globalism and its four horses of the apocalypse—free trade, immigration, financial deregulation and same-sex marriage—will destroy our families, communities and nations. The first phase is NAFTA and EU. Next, world government headed by the Antichrist and ruled by Sharia law.

This political narrative creates the impression the debate over the EU, Trumpism and globalism in general pits the forces of light against the legions of evil, between two hardened groups of anti and pro trade, immigration and secularism. If you support Brexit and plan vote for Trump you represent either the dark or glorious past, while the other side envisions a dark or glorious future. These deep political divisions in the UK, the United States and elsewhere would only end up with one side winning, and the other side losing. Thesis, antithesis. No synthesis.

The problem with this narrative is that it doesn’t really capture the complexity of the politics and economics ushered by globalization since the early 1990s, when governments started to deregulate financial markets, to increase and size and fast-track the liberalization of the global trade system, and to remove the major restrictions on immigration.

The earlier expectations that were raised by “Friedmanism” (named after Tom, not Milton Friedman) had been that those who embraced the principles of free markets, free trade and free immigration would create a more prosperous world free of conflict between ethnic groups, religions and nations. They would gradually weaken the power and influence of those who promoted the anachronistic values of identity, the reactionaries who would try to exploit any political backlash against globalization and call for restrictions on the flow of capital, goods and people. Following the collapse of the Berlin Wall, the creation and expansion of the EU and the integration of China and other emerging markets into the global economy, the reigning Zeitgeist exuded great confidence that “globalism”, the grand theory that the economic forces of globalization would overcome nationalism, ethnic and religious tension would win the day.

But globalism project has failed. It has accelerated global economic growth, providing more than a billion new producers and consumers, from China, India and elsewhere with the opportunity to join the capitalist world while accelerating the growth of the service and information-based sectors in the economies of industrialized West.

But globalism as an ideology was constructed around the notion of economic determinism. The assumption was that economic growth and liberalization would lead inevitably to political change, growing democratization and prosperous middle class that would help maintain political stability.

From that perspective, globalism, like Marxism, another example of the idea of economic determinism, failed to materialize and proved to be an illusion. The economic rewards provided through the process of globalization were not spread evenly in society: Turning the lords of finance and high-tech into super-billionaires who fashion themselves as the Master of the Universe, while decimating the large manufacturing industries and creating a new class of losers among the economically squeezed members of the middle class and blue-class workers.

Moreover, the dogma of globalism assumed that humans who desire to preserve their individual identity, to have wings to fly and to gain economic freedom, would celebrate the dawn of a new age of economic liberty. Long live the economic man!

But humans also want to belong to a group, to maintain a sense of collective identity and to have roots in the past. When these two colliding needs are not in balance, the political man returns and a political backlash to achieve new equilibrium is inevitable.

Brexit and Trumpism may be indication that a political backlash is taking place right now and that nationalism is on the rise. But we shouldn’t conclude that nationalism is about to replace globalism as the new driving force in politics and economics. Instead it’s a sign that a certain rebalancing between these two forces is creating a basis for a new equilibrium in industrialized societies.

That means in practical terms that the political and economic elites may have to slow down their efforts to liberalize global trade, deregulate financial markets and open borders to new immigration. They need to reassess some aspects of the ambitious globalization agenda: supranational institutions, like the EU, will need to return more power to national governments. Some free trade agreements may have to be renegotiated. Immigration needs to be restricted based on economic, national security and cultural considerations. And celebrate the passage of same-sex legislation before trying to force schools to allow “trans” men to use the women’s toilets. Easy does it!

Promoting and embracing such correction to the globalism project and the liberal principles it embodies doesn’t amount to buying into the notions of ultranationalism, protectionism, nativism or racism. They seem to be sensible responses by political leaders to the legitimate concerns of their voters and a way to deny political demagogues the opportunity to exploit economic anxiety and social alienation.

The burden of self-correction is on the side of the liberal political and economic elites who promote globalism who need to recognize that progress doesn’t move automatically forward in a linear fashion. Their opponents are wrong: It would impossible to stop the world and get down and close borders to trade and immigration. But it’s time for them to take some time out and find ways to co-opt their opponents, and convince them that the choice isn’t between globalism and nationalism. We’re all Cosmonationalists now!