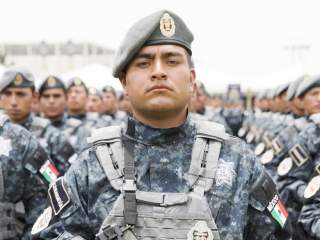 Just a few years ago, drug-related violence in Mexico had reached such alarming levels that some experts worried the country was on the brink of becoming a failed state. The decision by President Felipe Calderón (2006-2012) to launch a full-scale military offensive against the drug cartels backfired badly. Violence soared, and in portions of Mexico, one or more drug cartels challenged the legal government for preeminence. By the time Calderón left office, more than 60,000 Mexicans were dead from the fighting and another 25,000 were missing.

The situation stabilized somewhat after that time. Calderón’s successor, Enrique Peña Nieto, modestly de-emphasized the strategy of confronting the cartels militarily. And the turf fights among the trafficking organizations became less intense. Indeed, one of the dirty little secrets of the drug war is that the decline in violence coincided almost precisely with the rise of the Sinaloa cartel to barely disputed preeminence in Mexico’s drug trade. In any case, the number of drug-related fatalities peaked in 2011 and then declined steadily. In 2013 there were 18, 331 homicides—a 15 percent decline from 2012. And 2012 had already witnessed a small drop from 2011. In 2014, the number of killings fell even further, to 17,342.

But in 2015 that trend abruptly reversed, and that development has ominous implications. The turf wars that so plagued Mexico earlier in the twenty-first century show signs of returning, as existing cartels, and some new entries, seek to gain control over the trafficking routes to the multi-billion-dollar U.S. consumer market. That possibility has increased with the arrest of “El Chapo” Guzman, the long-time leader of the Sinaloa cartel.

Not only does his removal raise the prospect of an internal power struggle for control of the Sinaloa organization, but rival cartels may see an opportunity to expand their territory and market share. Such struggles are never conducted peacefully.

Indeed, the fight over Sinaloa’s assets may already be underway. There are indications that other—for the most part younger and more violent—drug lords in Mexico have begun to move in on portions of Sinaloa’s turf.

There is another aspect of the latest spike in violence that is especially troubling. During the early years of Calderón’s administration, most of the drug violence seemed to consist of the cartels fighting each other. Indeed, at one point Calderón contended that nearly 90 percent of the victims were themselves involved in the drug trade. His figure was likely exaggerated, but there was little doubt that inter-cartel fighting accounted for a majority of the deaths.

That situation began to change during the final years of Calderón’s presidency, when a greater number of attacks were directed against government targets—especially police and military personnel. With the resurgence of violence in 2015, that component is even more pronounced. The cartels are concentrating their attacks on law enforcement, security, judicial and political personnel to a greater extent than ever before.

This shift suggests the emergence of an agenda that transcends merely gaining control over the most profitable trafficking routes. It may be that the cartels are now openly challenging the government for political control of key areas of the country. That would be a worrisome, dangerous escalation of the conflict.

There is yet another sign that the Mexican government’s control may be fraying. There has been a gradual, but steady rise in vigilante activity.

Since early 2014 this has been evident, but the trend is accelerating. One could scarcely identify a more explicit vote of “no confidence” by portions of the Mexican population in the ability of the government to maintain peace and secure justice.

What all this means is that the ebbing of drug-related violence from 2012 through 2014 may have been just a brief interlude in a longer trend toward greater violence and chaos. If that is the case, the United States must be alert to developments and consider policy alternatives.

U.S. leaders cannot be indifferent to such dangerous disorder on our own border. They need to devote more time and attention to that problem, instead of trying to micromanage situations thousands of miles away from the American homeland in places such as the Middle East or the South China Sea.

Ted Galen Carpenter, a senior fellow at the Cato Institute and a contributing editor at The National Interest, is the author of ten books and more than 600 articles on international affairs. His books include The Fire Next Door: Mexico’s Drug Violence and the Danger to America (2012).