A Neoconservative Plan That Will Cripple U.S. Interests 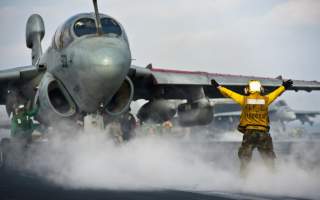 The Center for a New American Security (CNAS) celebrated the release of a major foreign-policy paper on Monday, entitled “Extending American Power: Strategies to Expand U.S. Engagement in a Competitive World Order.” The paper, authored by a panel whose cochairs were Robert Kagan and James P. Rubin, is designed to “help shape the national conversation on America’s role in the world during the run-up to the presidential election in November 2016.” If the policy recommendations in this twenty-two-page report are followed by the next administration, the result won’t be to extend American power abroad. It would most likely cripple it.

The theme of the policy options and recommendations throughout this paper reflect the ambitions of an imperialist, domineering and expansive global power. The authors can’t, of course, describe their aspirations in those unpalatable terms. America would properly reject them immediately. Instead they seek to embed these concepts in pleasant, noble terms, explaining they seek to promote “the idea that American leadership is critical to preserving and strengthen the bedrock of today’s international order.” This highlights an important point up front. Definitions matter.

For too long now, the adherents of a hawkish school of foreign policy, often referred to as neocons, have repurposed the definition of “leadership” to mean international engagement, enabled by the stationing of combat forces or outright employing lethal military power abroad, to “shape” or coerce foreign governments to comply with American directives. At the same time, they have successfully stained any who advocate for a restrained use of force by deriding them as “neo-isolationists” who “fail to lead.” This militaristic foreign policy advocated by Kagan, Rubin and their coauthors, however, ultimately undercuts American interests and violates traditional American values in four major ways.

First is the premise upon which their theory rests: that the United States has an obligation, a right and the authority to unilaterally establish and enforce a set of norms of our choosing on the rest of the world. For example, the authors believe the American people must “accept their role as upholder and defender of the liberal world order.” In particular, the United States must “continue enforcing a rules-based order in the Asia-Pacific region” to check a modernizing China. On what authority they believe the United States has the right to enforce a liberal order on the rest of the world is not explained.

And to deter Russia, the report advocates sending to Europe “a mix of permanently stationed forces, rotationally deployed forces, prepositioned equipment, access arrangements and a more robust schedule of military training and exercises.” There is an outright assumption that the militaries of the countries directly affected are incapable of defending themselves, and that without U.S. military intervention, Europe would fall. The combined military strength of the German, French, British, Italian, Polish, Hungarian, Czech and other militaries dwarfs that of Russia.

Second, in none of these examples does the paper consider the reactions other global powers might have to the United States flexing its military muscle, often on their borders. All actions of non-allies are considered to be hostile to the United States, and thus must be checked by the threat or use of military power. It gives no consideration to the valid security interests of any other nation, apparently didn’t consider the possibility that the counteraction these nations will take to defend themselves might harm American interests, and assumes that diplomatic engagement is incapable of solving disputes.

Third, there is a near complete unwillingness to consider that when policies similar to the authors’ recommendations have been used in the past, the results have been abysmal failure. A few specific examples: Their prescription for battling ISIS says it is imperative that the United States show “a new resolve by increasing significantly its military contribution across the board.” The United States deployed 187,000 troops to go into Iraq over an eight-year period to stamp out the previous insurgency, only to see it return as soon as our troops left. Are the authors suggesting another major deployment of ground combat power to root out ISIS? If, not, do they believe that incrementally increasing troop levels above the current number is going to accomplish what previously took 187,000?

In Syria, they say the United States “must employ the necessary military power, including an appropriately designed no-fly zone, to create a safe space in which Syrians can relocate.” Employing military power in Syria will be a direct attack on the nation of Syria, drawing us into their civil war as a belligerent. Have the authors given any thought to Assad’s reaction to our attack against his country? What of the reactions of Syria’s allies in Russia, Iran and Hezbollah? Are they prepared to risk a major war against Syria and its allies in order to participate in another civil war?

Fourth, to enable this expansive military-dependent foreign policy, Kagan, Rubin and company write that an “urgent first step” is for the U.S. Congress to “significantly increase U.S. national security and defense spending and eliminate the budgetary straitjacket of the Budget Control Act.” To fund this vision, the American people will have to spend billions more of their tax dollars, increasing the defense budget to do things such as: Pay in blood and treasure to rescue the Baghdad government from ISIS; degrade or defeat the Assad regime in Syria for the benefit of the various Islamic rebel groups; patrol the 1.3 million square miles of the South China Sea to protect all other nations from China; and provide American land, sea and air forces to keep Russia at bay for the benefit of many wealthy and modern European nations.

I am a strong advocate for a powerful military. I want the U.S. Armed Forces to be strong enough to crush any opponent that attacks America, guaranteeing the security of our nation, its citizens and our way of life. I support foreign and domestic policies that best facilitate that objective. International leadership, in my definition, is provided by elected and appointed American officials who interact with the world’s 192 sovereign nations in a constructive way that respects and values others, best protects American interests and facilitates a peaceful global environment.

Force is absolutely a policy option of last resort and is rarely used. That’s how you extend American power.