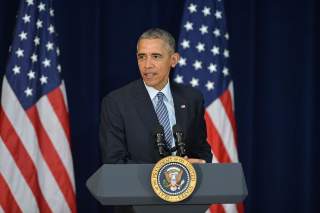 “I wasn’t expecting to feel this way, but I’ll miss him,” was something I heard from several Republicans last night after the President’s farewell speech. They hadn’t voted for Obama nor been tempted to, but he had self-control, he kept things on an even keel, and his personal character showed many of the right priorities, starting with how he treated his family. And the way he spoke didn’t insult your intelligence.

A farewell address is no time to get into policy quarrels, and Obama understood that. His few policy remarks, notably in defense of the Affordable Care Act, were brief, if heartfelt. He let loose with no zingers and named his successor only once.

Who can blame him for keeping his distance from events of the moment? On national unity, not a new theme for him, he struck the right notes: back off from regional enmities, get out of your social media silo, stop demonizing opponents. This drew applause from his followers in the arena at McCormick Place, but outside, in the arena of clickable outrage, he might as well have been shouting into the winds. While the Twitter talk of #CaliforniaSecession had finally subsided, social media had turned to the task of sorting people who liked actress Meryl Streep from those who liked football and mixed martial arts, and woe to you if you preferred to go on liking both at once.

Even as the departing President warned against demonization, Democratic interest groups were circulating full-horns-and-tail dossiers on at least eight Trump Cabinet nominees. And this, everyone knows, is just the mildest preview of what to expect when a new Supreme Court nominee is announced.

My favorite passage in Obama’s speech – it could with few if any changes have been published by my own Cato Institute -- was the one lauding the Founders’ “essential spirit of innovation and practical problem-solving,” a spirit...

“born of the Enlightenment, that made us an economic powerhouse – the spirit that took flight at Kitty Hawk and Cape Canaveral, the spirit that cures disease and put a computer in every pocket.

It’s that spirit – a faith in reason, and enterprise, and the primacy of right over might, that allowed us to resist the lure of fascism and tyranny during the Great Depression, and build a post-World War II order with other democracies, an order based not just on military power or national affiliations but on principles – the rule of law, human rights, freedoms of religion, speech, assembly, and an independent press.

That order is now being challenged – first by violent fanatics who claim to speak for Islam; more recently by autocrats in foreign capitals who see free markets, open democracies, and civil society itself as a threat to their power.”

But Obama’s words have always held broader appeal than his policies. One of his few specific bits of policy was a familiar Democratic call for new measures “to give workers the power to unionize for better wages.” That served as a reminder that his administration’s implacably pro-union policies, along with its many new mandates on employers and heavy regulatory hand in general, played a key role in driving business-oriented voters home to the Republican Party in recent elections.

The same day Obama spoke, Gov. Matt Bevin was signing a law making Kentucky the nation’s 27th right-to-work state. (Missouri may soon follow.) Right-to-work has made great strides in the past few years, led by industrial Midwestern states like Wisconsin, Michigan, and Indiana, in what in retrospect stands out as an early clue that these states had ceased to identify politically with the old Democratic coalition.

What kind of ex-presidency has Obama planned? We know it will involve promoting democracy and civic involvement and specifically a battle against gerrymandering and for redistricting reform.  As one who has been involved in redistricting reform efforts in my own state of Maryland, a state where Democrats drew the lines, I see a lot of potential there, provided Obama can resist pressure to represent the institutional interests of the Democratic Party. From what I've seen, a majority of voters cutting across party lines would welcome a better way of drawing lines.

Walter Olson is senior fellow at the Cato Institute. He also serves as co-chair of the Maryland Redistricting Reform Commission under Gov. Larry Hogan (R-Md.).