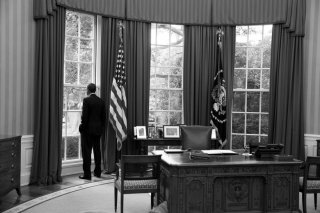 President Barack Obama would like nothing more than to cruise the next five months into retirement after eight grey-hair-inducing years. The world, of course, would keep on going and new crises would inevitably put up during those five months, but one could argue that Obama deserves at least a little downtime; Congress took seven weeks off, so why can't he play a few more rounds of golf with his buddies?

If Syria weren't such a catastrophe—with more refugees and fresh war crimes almost every day—cruising towards Inauguration Day may actually be possible. But the civil war in Syria will be keeping the president and his staff awake at night to the very last moment of the Obama presidency. Despite the intervention in Libya being labeled by Obama himself as his biggest mistake and greatest regret, it will be the slaughter in Syria and what is conventionally perceived as a weak U.S. response that will likely be viewed by historians and pundits as the biggest stain on his legacy. Nicholas Kristof of the New York Times has already leapt to that conclusion: "I admire Obama for expanding health care and averting a nuclear crisis with Iran, but allowing Syria’s civil war and suffering to drag on unchallenged has been his worst mistake, casting a shadow over his legacy."

The year-long investigation by the United Nations and the Organization for the Prohibition of Chemical Weapons, which found that the Assad regime used chemical weapons in at least two instances (likely many more) on the battlefield in 2014 and 2015, has only compounded that judgment in the minds of many. Those in the liberal-internationalist and neoconservative crowds in Washington who were already aghast at Obama's deal with Vladimir Putin to remove and destroy Syria's chemical-weapons stockpile have crowed that this latest report is an unfortunate but inevitable consequence of the president’s naïveté in the face of a dictator. Ditto Speaker Paul Ryan, who blasted the chemical-weapons agreement at the time and marked the three-year anniversary of the gas attack with a terse statement claiming that the agreement "stabilized the regime." And ditto Elliott Abrams, George W. Bush's top Middle East official in the National Security Council: "If President Obama had reacted strongly to previous uses of poison gas by Assad, this would not be happening in Syria today." Even Roger Cohen of the New York Times piled on: "Obama’s decision in 2013, at a time when ISIS scarcely existed, not to uphold the American ‘red line’ on Assad’s use of chemical weapons was a pivotal moment in which he undermined America’s word."

The fact that Bashar al-Assad used chemical weapons after the deal was signed and that he very likely hid some of his undeclared stocks from OPCW inspectors is beyond unfortunate—what word can one use when young children suffocate to death after inhaling toxic chemicals released by their own government? But realists would tell you that it was also perfectly predictable that a dictator constantly in fear of his life would not disclose everything to the international community and would instead prefer to keep some of those weapons in reserve in case his regime began to totter. Assad doesn't want to end up humiliated and in exile like Tunisia's Ben Ali or executed in a storm drain like Libya's Muammar el-Qaddafi. Keeping a small fraction of those chemical arms in government hands and purposely failing to disclose other chemical-weapons facilities to the U.N. is therefore a rational thing for Bashar Assad to do—even if it's a violation of the very accord he signed three years prior.

To critics of the entire "red-line" episode, the joint UN/OPCW report is proof that the Obama administration was made to look like a fool—that entering into an agreement and trusting that a dictator would willingly give up his most powerful weapons was the very definition of aloofness. But what these very same critics cannot answer is whether the alternative they were advocating at the time—using coordinated military force on Assad's chemical-weapons facilities—would have produced a better result than stepping back and negotiating the arsenal away. Would military force have destroyed 1,300 tons of sarin and VX nerve agent? Would it have allowed international inspectors to investigate Syria's chemical-weapons program for the first time in a very long time? Would military force have convinced the Assad regime to stop committing war crimes and crimes against humanity on its own people, especially when taking into account that a military campaign would not have consisted of a regime-changing mission?

We can all play Monday-morning quarterback and assume that airstrikes would have demolished Assad's chemical-weapons facilities and sent a warning that his regime was in Washington's crosshairs. But we simply don't know if this would have occurred—and indeed, the argument rests on a string of optimistic assumptions.

What we do know is that the 2013 agreement with the Russians on Syria's chemical stockpile forced Assad to not only admit that he possessed such weapons, but to eliminate a large part of a program that he considered an insurance policy. Imagine how much more damage the OPCW could have reported last week if 1,300 tons of chemical material hadn't been destroyed.

News that the Syrian government has continued to use gas to kill civilians is yet another crime against humanity that will hopefully be prosecuted by an international tribunal when the war ends. But it shouldn't be used as an indictment of the 2013 agreement, however imperfect that agreement was and however awkwardly the Obama administration executed the choice of diplomacy over war.