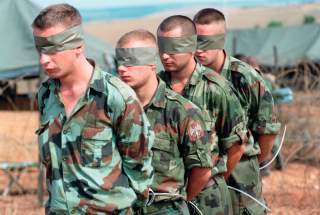 One of the problems that emerges when U.S. officials and the news media are focused on a small number of foreign-policy issues is that troubling developments can occur below the radar in other areas. That appears to be happening in the Balkans, a region that was a foreign-policy priority of the Western powers in the 1990s, but which has faded to near invisibility in recent years. While American policymakers and opinion leaders obsess about the Middle East, North Korea and every minutia concerning President Trump and his alleged Russia connections, tensions in the Balkans are simmering and threaten to reach a boil.

The latest worrisome development is the victory of the most hardline factions in Kosovo’s just-completed national elections. An alliance that Kosovo’s media have dubbed the “war wing,” emerged as the largest bloc in parliament, garnering 34 percent of the vote. The principal leaders of that faction, headed by the Democratic Party of Kosovo, are President Hashim Thaci, and another former leader of the infamous Kosovo Liberation Army, Ramush Haradinaj, who is likely to become prime minister. European Union and UN investigators have accused both men of numerous war crimes during Kosovo’s war of secession from Serbia in the late 1990s.

The surge of strength for rabid nationalism was further enhanced by the surprisingly strong showing of the leftist Movement for Self-Determination, which drew 27 percent of the vote. The more moderate, current governing coalition, led by the Democratic League of Kosovo, came in third with barely 25 percent. The movement is even more radical than Thaci’s faction. Members have repeatedly disrupted parliament with fights and tear gas to block conciliatory legislation regarding either Montenegro or Serbia. On one occasion movement thugs even threw firebombs during demonstrations outside the parliament building.

Not only are Thaci’s war wing and the Movement for Self-Determination committed to a hostile, uncompromising stance toward the remaining Serb minority in the north of Kosovo, those radicals have also obstructed the conclusion of a border agreement with Montenegro, and they lay claim to major chunks of territory in that country as well as Serbia and Macedonia. Indeed, many of them are determined to have Kosovo merge with Albania, and add the other territorial claims to create a “Greater Albania.” That is not a new objective for Kosovar hardliners. Almost immediately following NATO’s severing of Kosovo from Serbia following the seventy-eight-day air war in 1999, Greater Albania advocates stirred up secessionist sentiments in majority Albanian areas of Macedonia. The resulting turmoil reached crisis levels in 2001 and 2002 and has flared repeatedly since then, reaching alarming levels again this year.

Neighboring countries are increasingly uneasy about the growing militancy in both Kosovo and Albania. Earlier this year, the Serbian government warned that any Albanian move to annex or merge with Kosovo could well lead to war. Belgrade was responding to a threat from Albanian Prime Minister Edi Rama to pursue annexation if the European Union did not approve Albania’s membership application. Serbian officials also pressed both NATO and the EU to rule out any toleration for the creation of a Greater Albania.

Tensions between Kosovo and Serbia have escalated over other issues in recent months. Kosovar authorities systematically impede commerce between Serbs in northern Kosovo and Serbia itself. In mid-January 2017, Serbia attempted to restart train service to the northern, predominantly Serbian, portion of its former province. Kosovar police and paramilitary units (as well as a civilian mob) forcibly prevented the first train, painted in Serbia’s national colors, from crossing the de facto border between Serbia and Kosovo. Furious Serbian leaders branded the move “an act of war,” and already worrisome tensions have spiked. Belgrade promptly suspended the diplomatic dialogue that the European Union had sponsored, with more than a little prodding directed at both capitals, since 2011. Matters had become so tense that even Senator John McCain, a long-time, vocal supporter of Kosovo independence, begged Kosovar officials to resume the dialogue with the Serbian government, contending that it was “the only way to a prosperous future.”

The United States and its NATO allies have consistently, sometimes blindly, backed the policy agenda of Kosovo and Albanian leaders. The 1999 military intervention to detach Kosovo from Serbia was only the most egregious example. NATO also has stood by passively in the years since that war as Kosovar mobs engaged in ethnic cleansing against Serbs and other remaining minorities, and Western authorities have done little as Christian religious sites—many with great historical importance—have been desecrated or obliterated. Washington and other Western capitals have pressed Macedonia’s government to make more and more political concessions to the country’s Albanian minority. Yet the demands of that faction keep escalating. The country’s prime minister has finally had enough and is firmly resisting those demands, despite continuing Western pressure for compromise.

Washington’s military intervention and subsequent political and diplomatic support for an independent Kosovo was unwise for multiple reasons. U.S. leaders may sincerely have believed that such a policy would bring peace and stability to the Balkans. If so, that expectation is proving horribly false. The drive for a Greater Albania is gaining new momentum, and that agenda creates major problems with multiple neighboring states. If the Balkans erupt into conflict again, which is now a serious possibility, the United States should avoid the temptation to meddle further. Washington especially should not repeat the folly of its previous policy and back the faction that is causing the most disruption.