Our Aggressive Pursuit of Global Democracy Has Backfired 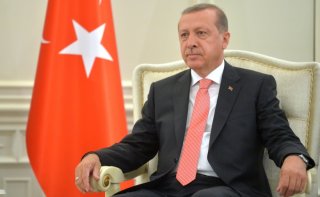 “That's nobody's business but the Turks”—“Istanbul (Not Constantinople),” a 1953 swing-style song, lyrics by Jimmy Kennedy

If you join a group of historians and political scientists discussing the rise of Adolf Hitler to power in Germany, you can be certain that someone is going to argue that the Nazi leader achieved his goal through democratic means, and someone else is going to challenge that.

There is not a simple resolution of this debate, and the contending interpretations are very much based on one’s definitions of terms like “democratic election” or “democratic process” or for that matter, “democracy,” as well as the historical analysis of the political environment under which the Nazis came to power.

No one would deny that the last stages of the Nazi rise to power and Hitler’s appointment as Chancellor took place at a time when the democratic foundations of the Weimar Republic were being undermined and eventually demolished by the Nazis and their allies through undemocratic and illegal means and under an environment dominated by political terror and violence. But then it’s also true that it was an imperfect democratic system that allowed the Nazis mobilize sizeable electoral support.

The bottom line is that quite a few parliamentary coalitions have been formed in democratic Europe following World War II when the dominant party in, say, Italy, Belgium or Holland, attained a narrower plurality than the Nazis did in 1932 when the first of the two elections to the Reichstag the Nazi Party won 230 out of 608 seats, making the largest party.

At the same time, elections held in countries, where the political environment was unstable than in Germany had been in 1932 and under electoral systems that had less legitimacy than the one under which the Nazis succeeded in mustering their electoral power were endorsed by the United States as democratic; or sort of: Elections that took place in Iraq, Pakistan and Azerbaijan come to mind.

The debate over whether democracy, and free elections in particular, helped Hitler win power is clearly more than just an academic exercise. We cannot imagine a political regime whose values were more antithetical to those represented by our ideal of a liberal democracy. And we have concluded that Nazilike regimes are by definition aggressive and a threat of the international order, and by extension, to America’s strategic interests.

From that perspective, even those who don’t subscribe to the Kantian peace theory, or buy into the notion that democratic governments don’t go to war against each other, have accepted it as a given that encouraging the expansion of the number of democratic nations around the world would be in line with both American values and interests.

Many realpolitik types have argued on occasion that it would be in U.S. interests not to destabilize and even to maintain in power a friendly authoritarian regime or to make a distinction between the different types of nondemocratic regimes.

But the end of the Cold War and the peaceful transition to from communism to democracy in former Soviet Bloc have played into the hands of those who placed the promotion of democracy at the center of U.S. foreign policy. And it would have been difficult in recent years to find many policymakers or political thinkers who would have publicly promoted the idea that Washington should not applaud the spread of democracy worldwide, or warn that such approach would eventually produce outcomes that run contrary to American interests and values.

But then came the aggressive campaign launched by former Republican President George W. Bush and his neoconservative advisors to establish democracy and hold elections in Iraq and the rest of the Greater Middle East and elsewhere. That was followed by the effort by Democratic President Barack Obama and his liberal internationalist aides to support the political forces unleashed by the Arab Spring in Egypt and other parts of the region.

The result was that the axiom that promoting democracy would help advance U.S. interests and ideals suffered a blow, after these policies ended up helping to elect or strengthen the power of anti-Western forces, including radical Islamist groups, both Sunnis and Shiites, in Iraq, Syria, Lebanon, the Palestinian territories, and Egypt, and strengthen the influence of Iran and its political satellites.

It’s not surprising, therefore, that against this backdrop of political chaos, growing radicalization and the damage to western interests, that have followed the holding of free elections in these parts of the Arab Middle East, one witnessed an intellectual springtime for the Hitler-had-won-democratic-elections thesis.

Neoconservatives on the right and neo-Wilsonians on the left have experienced a devastating form of cognitive dissonance. They had to explain why ousting authoritarian regimes, installing democracy and conducting free elections, seemed to play into the hands of bad guys that wanted to harm America and not unlike Hitler in the 1930s, exploited the democratic system to advance their own political agendas that run contrary to the most treasured values of the Enlightenment, including freedom of religion and women’s rights; not to mention the fact that these same elected guys hated America and everything that it stood for.

One way of resolving this cognitive dissonance has been through what could be described as dialectical thinking running amok. We should expect a long process of political change, of trial and error, that in the short run may be destructive but that in the long run would get everyone of the promised land of the democracy; remember that the United States had to go through a bloody civil war before things got better. And even America doesn’t have a Jeffersonian democracy; so why do you expect that to happen in Iraq?

Another more sensible response accepted the notion that while democratic and liberal values were universal, we needed to consider the history of the culture of parts of the Muslim world, especially the Arab Middle East, where collective sectarian and tribal identities take primacy over the liberal Western ideas that are based on the celebration of the rights of the individual.

After all, we were told, there was a time when some political thinkers cautioned that the history and political culture of Russia and other eastern European societies were not conducive to the evolution of liberal democratic institutions.

And then there was Turkey, which supposedly provided for a model of an Islamic nation that could continue to remain true to its culture while embracing the liberal and democratic ideals and integrate itself into the West.

It’s difficult to recall today that there was a time when neoconservatives and neo-Wilsonians hailed Tayyip Erdoğan and his political movement as representing the final stage of the dialectical process under which the secular and Western principles laid down by Ataturk, the founder of the Turkish Republic, would be fused with a progressive form of Islam. You had Christian Democratic parties in Europe. Now you were going to have an Islamic Democratic party in Turkey, and probably later on in post-Mubarak Egypt.

It’s obvious now that there was nothing very dialectical in Erdoğan’s thinking or on the minds of the majority of Turkish voters when they elected him to power in several democratic and free elections. Indeed, in contrast with the wishful thinking in the West, Erdoğan has made it clear in public addresses and interviews that his long-term goal was to establish an Islamist state in Turkey, that may or may not place an emphasis on preserving democratic and liberal institutions. That Erdoğan enjoys today more public support than many Western leaders explains why his efforts to consolidate power following the recent military coup, have not ignited huge public protests.

A similar semidemocratic or semiauthoritarian government has been also emerging in Russia under Vladimir Putin, who was elected in democratic and free elections by the majority of Russian voters who apparently support his ultranationalist agenda that and its nostalgia to days of the Russian Empire, not unlike Erdoğan’s efforts to revive the Ottoman Empire.

What really makes the neoconservatives and neo-Wilsonians crazy along with the rest of the liberal Western elites is that Erdoğan and Putin, not unlike the nationalist governments that are now in charge in Poland, Hungary, Slovakia (or in Israel and India) were elected in open, free and democratic elections. It was the same process that caused the Brits voting in support of Brexit, just like the doctor prescribed.

And deep in their hearts, even the most ardent prodemocracy promoters in Washington recognize that most Egyptians support the military regime in Cairo. And they are probably also wondering whether if a free, open and democratic elections in China would result in the coming to power of a nationalist and authoritarian leader very much like current President Xi Jinping.

Indeed, democracy and nationalism go together like horse and carriage. And the new nationalist leaders who are elected by the people are more likely than not to challenge the global status quo and the power that seeks to maintain it.

That doesn’t mean that Washington should pursue policies aimed retarding the spread of democracy. Instead, it should allow the Turks, the Russians and other people to write the history of their nations and create incentives for their leaders of follow policies that would be compatible with that of the United States, and take action against them, whether it’s Hitler or Erdoğan, if they harm U.S. interests.