Pull U.S. Troops Out of the Middle East and Put 'America First' 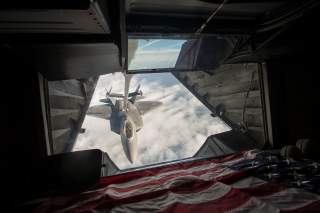 If the intent of President Trump’s “America first” foreign policy is to “put the interests of the American people and American security above all else,” events currently playing out in Syria expose it as a failed policy. While the goal of defending American citizens and interests from the Islamic State (ISIS) has always been entirely valid, the way Washington has pursued that objective has diminished American security, not preserved it.

On the surface it may appear to have been a smart move: to combat ISIS, the United States would support the Iraqi Security Forces (ISF) in their drive to retake Mosul and support the predominantly Kurdish Syrian Democratic Forces (SDF) to capture ISIS’ stronghold of Raqqa. But it shouldn’t have taken much analysis to see the plan had little chance of long-term success for America.

At a fundamental level, it has been plain from the beginning that ISIS was never going to be a viable political entity that could maintain the territory it seized from a fatally weak Iraqi military in June 2014. ISIS fighters were excellent at slaughtering civilians and prisoners, but with no administrative ability whatsoever, their demise was ordained before the dust had settled from their original conquest.

A wise U.S. policy at the time would have been to contain the ISIS threat to its geographic footprint and demonstrate patience as the Islamic terror group was slowly squeezed to death by the many regional powers that had both the motive and the means to destroy ISIS.

In Iraq, the government in Baghdad had existential motivation to recover from their 2014 debacle, reform its military, and retake its territory. While it would have taken longer for them to eliminate ISIS, the combination of the ISF and the Shia militias would have eventually ground the Islamic State out of existence.

Things were even more complicated in Syria, and the forces opposed to ISIS were larger in number and greater in power. The regime in Syria, the Russian and Iranian armed forces, Turkey, and numerous rebel groups all opposed ISIS, would eventually have succeeded in wiping out ISIS without any U.S. involvement.

Instead, the Obama administration reinserted thousands of U.S. troops into Iraq beginning in 2014 to work with the ISF, and in late 2015 deployed the first special operations troops into Syria to work with various rebel groups allied against ISIS. The complications and deterioration of U.S. interests began almost immediately.

In Iraq, U.S. advisors and air power in some cases ironically helped Iranian-backed militias succeed on the ground, strengthening Teheran’s hand in Iraq. Their influence remains strong today. Less than two months into his presidency, Trump ordered hundreds more troops into Syria to assist the SDF in its battle against ISIS, especially in Raqqa. Almost immediately U.S.-NATO ally Turkey protested the effort, Syria condemned the intrusion into their country, and Russia cautioned against it.

The U.S.-backed SDF did indeed eventually liberate Raqqa, but again it must be pointed out that ISIS would have eventually lost Raqqa even without U.S. involvement. The cost to our country at having supported the Kurds, however, has been growing.

Making good on his early threats, Turkish president Recep Tayyip Erdogan crossed into Syrian territory to engage in what he called Operation Olive Branch on January 20. Turkish troops began attacking the SDF, whom Ankara views as a terror threat to its country. Though both Secretary of State Tillerson and Secretary of Defense James Mattis mildly protested, Erdogan ignored U.S. pleas with cavalier disdain.

“We don't care what they say,” the Turkish president said of America’s reaction. “They will learn how wrong it is to trust a terror organization.” Adding that Turkey would only remain on Syrian territory until they had accomplished their objectives, Erdogan sarcastically added, “I ask the United States: Did you have any specific time duration in Afghanistan?”

Adding insult to injury, Russia owned the airspace above the location in Syria where Turkey attacked: Ankara got Moscow to support its move against the SDF in opposition to U.S. preferences. That a NATO ally can so easily and publicly rebuke the United States, literally killing soldiers that America supported and cooperating with its biggest competitor, is a troubling indicator how much influence Washington has lost. Russia is only too happy to drive a wedge between NATO countries, especially if it pokes a stick in America’s eye.

All of these developments are unequivocally antithetical to American interests––and all of them could have been avoided if Obama had not committed the United States to the operations in Iraq and Syria, and if Trump hadn’t doubled-down on the missions. As it is, the trouble is still not over. Recent events have raised the potential for unintentional military clashes between the United States and Turkey.

On Wednesday the White House said that Trump told Erdogan in a phone conversation that Trump “urged Turkey to deescalate, limit its military actions, and avoid civilian casualties.” On the same day in Ankara, Erdogan announced his forces would expand the assault “[s]tarting in Manbij,” where “we will continue to thwart (SDF’s) game.” In response, U.S. military spokesman Col. Ryan Dillon said the U.S. Forces in the Manbij area “have an inherent right to defend themselves and will do so if necessary.”

Moreover, though Washington helped liberate Mosul and Raqqa, the terror threat to the United States ISIS poses is virtually unchanged, as the group’s leaders simply moved underground to continue operating. In other words, the United States has expended enormous resources and sacrificed many of its service members to a mission that has resulted in a net loss to America.

Instead of trying desperately to remain in Iraq and Syria to perpetuate these failures, it is time for the interests of America to be considered first. Washington must wind down its combat missions in the Middle East, redeploy its troops to their home bases, and begin the process of rebuilding the ability of America’s Armed Forces to face potentially existential fights in the future.