Rhodes Is Right About 'The Blob' 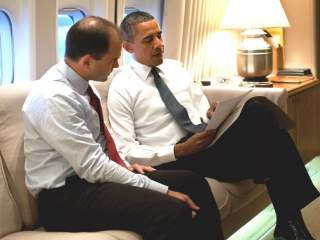 If you thought President Barack Obama’s lengthy exposé with the Atlantic’s Jeffrey Goldberg last month was one of the more candid interviews by a sitting public official, then you clearly missed David Samuels’ profile of Ben Rhodes in the New York Times Magazine last weekend. The piece was, in a word, stunning. It was stunning for the honesty with which President Obama’s deputy national security adviser embarrasses the mainstream news media and the Washington press corps for being unable to think for themselves; for the impressive way in which Rhodes climbed the U.S. foreign policy ladder in just a few short years; and for the fact that an administration official still serving in office is naming names and embarrassing the very people in the press that have been instrumental in selling Obama’s foreign policy.

It barely took an hour after Rhodes’s interview was published on the Times website for members of the foreign policy establishment to pounce. This should not have been an unexpected development; indeed, when someone derogatorily refers to your community as “the blob,” and as a bunch of “morons” for promoting the Bush administration’s invasion of Iraq, that community is going to respond with full force. And that is precisely what they did.

My Twitter feed was inundated with an endless stream of comments lambasting the thirty-eight-year-old “policy whisperer” as a man who is the equivalent of an arrogant, thick-headed teenager who thinks he’s the smartest guy in the room and knows more about the world than the adults. The Brookings Institution’s Shadi Hamid described Rhodes’ interview as “a genuine disaster” that would likely cause even more problems for the administration in the minds of the Washington elite. Rosie Gray, a political reporter for BuzzFeed News, was aghast that the White House would allow Rhodes to talk as openly as he did on the record to a journalist, and that Rhodes himself would actually make his thoughts about the press public. Others were less kind, if not outright hostile; Tom Ricks, a former war reporter for the Washington Post, a best-selling author, and a columnist for Foreign Policy, captured the anger and exasperation when he wrote that Rhodes “comes off like an overweening little schmuck.”  Or, perhaps Max Boot, senior fellow at the Council on Foreign Relations and a member of “the Blob” that Ben Rhodes dismisses, sums it up best: “[W]hat really struck me about the article is the supreme arrogance that grips this White House. That is an occupational hazard in any White House, of course, but Obama and his closest aides take it to a new level.”

The reason that White House officials usually agree to engage with reporters in longform interviews to begin with is to sell a policy that is in danger of collapsing under popular pressure, provide the administration with an outlet to get some positive press in general, or to start the process of building the President’s historical legacy at the end of his term. It’s difficult to conclude why Ben Rhodes decided to talk exhaustively with David Samuels or what he hoped to accomplish with this interview. If the goal was to piss people off, then he succeeded with flying colors.

Rhodes is, in many ways, an easy target for those in Washington who are tired of President Obama and waiting for his eight-year reign to end on January 20, 2017. For Republicans, Ben Rhodes is a political hack and neophyte with no foreign policy experience who nonetheless is one of the most powerful and influential foreign policy officials in the administration. For members of “the Blob”—that interconnected system of think tanks in Washington that churns out dozens of reports and op-eds every week—Rhodes is an amateur who believes he knows more about national security policy than the experts who study it for a living. And for journalists covering the White House, State Department, and Defense Department, Rhodes is the spinmeister who molds the mainstream media into a second press shop for White House policy.

Yet what others don’t seem realize is that Ben Rhodes wasn’t brought into the Obama administration for his talents as a foreign policy luminary the likes of which we have not seen since Henry Kissinger, George Schultz, and Brent Scowcroft. He has proven valuable, rather, because of his talent in translating President Obama’s innermost thoughts and concepts into policy speeches that the American people can understand and that the media can reference to write their stories.

It just so happens that Rhodes’s official title—Deputy National Security Adviser for Strategic Communications—is a pretty good description for the work that he has been doing every day for the past eight years. Indeed, when Rhodes talks about enlisting a number of nonpartisan organizations last summer push the administration’s narrative about the Iranian nuclear deal last summer (the nominal “echo chamber” that he talks about), what he means is that he is doing the job that he was assigned by the President of the United States. The fact that journalists and reporters who had very little knowledge about the intricacies and scientific details of nuclear technology readily used those talking points in their stories—thereby directly playing the part of administration spokesmen—is a sin of the journalists themselves. The “strategic communications” part of Ben Rhodes’s job title is self-explanatory, isn’t it?

There is always a possibility that I’m being naïve. Perhaps I misunderstand what the phrase “strategic communications” means. As Daveed Gartenstein-Ross, a terrorism analyst at the Foundation for Defense of Democracies pointed out in a Twitter conversation, just because someone is responsible for managing the relationship between foreign policy and the media doesn’t mean that this person should be sending the press falsehoods that boil down to twenty-first century-style propaganda.

Gartenstein-Ross has a solid point, and in an ideal world, there wouldn’t be any intersection at all between domestic politics and the national security decision-making process. Unfortunately, we don’t live in that kind of world. Instead, Americans are forced to endure a world where every single policy is enveloped in partisan political considerations in a town that boasts a zero-sum mentality. Ben Rhodes was and remains at the frontline of this never-ending battle. For good or for ill, he has succeeded more than he has failed.

Let's not pretend that a Republican White House would not do the same exact thing. How is what Rhodes did any different from the actions that Ari Fleisher, Scott McClellan, and Karl Rove took during their eight years in the White House?  Regrettably, this is what business has become in Washington.