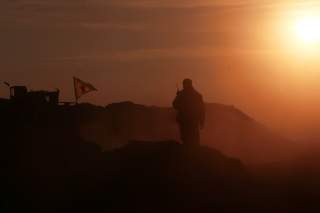 As President Trump muses periodically about a prompt withdrawal of U.S. troops from Syria, he confronts warnings, including from his own foreign-policy advisers, that such a move would risk the onset of greater chaos in that country. He has responded with suggestions that an Arab stabilization force supplement and gradually replace U.S. troops to forestall that danger. However, the replacement force he has in mind would not be a generic “Arab” contingent, as he and other proponents describe. It would consist primarily of personnel from Saudi Arabia and its Gulf allies.

Such a force would be neither politically neutral nor dedicated to restoring and preserving peace in Syria. Instead it would be the instrument of Sunni Arab power dedicated to overthrowing Bashar al-Assad. Indeed, since the earliest stages of the Syrian civil war in 2011 and 2012, the Gulf powers (along with Turkey) have been intent on that objective. The rebellion against Assad is primarily a Sunni bid for power against Assad’s coalition of religious minorities. As early as 2012, journalists embedded with rebel forces noted that they were virtually all Sunnis. Arrayed against them were Assad’s followers, primarily members of his quasi-Shiite Alawite sect, Christians and Druze. Syrian Kurds were busy pursuing their own agenda of carving out a de facto independent state in the north.

Predictably, Saudi Arabia, Turkey, Qatar and other Sunni powers backed the rebels to the hilt, supplying them with both money and military hardware. Soon, though, they lost control of some of those forces—factions that evolved into ISIS. As early as 2012, the United States cooperated with Riyadh and Ankara, sending “nonlethal” aid to supposedly moderate insurgents. By 2013, Washington was shipping arms to them, further entangling the United States in an increasingly murky ethno-religious conflict. The effort to boost the fortunes of Riyadh’s Syrian clients failed, though, when Russia intervened in 2015 and backed government forces with extensive air power.

Introducing a bogus stabilization force at a time when Assad and his Russian patrons are on the verge of victory over the insurgents is a last-ditch Sunni ploy to help the rebels avoid defeat. Even reasonably astute U.S. officials should understand that reality. They should also comprehend that Riyadh’s goals do not necessarily benefit America’s interests. Most of the factions that Saudi Arabia and its Gulf allies have backed are staunchly Islamist. One prominent client is the Salafist group Ahrar al-Sham. And Saudi support also seems to be flowing to Tahrir al-Sham (formerly Jabhat al-Nusra) once that group officially ended its ties with Al Qaeda.

The emergence of a post–Assad government that such factions would dominate might advance the agenda of the ultra-conservative Saudi royal family, but replacing a secular dictator like Assad with a Sunni Islamist regime does not enhance U.S. security in the slightest. Yet Syria is not the only arena in which Washington is supporting Riyadh’s policies contrary to America’s best interests. Both the Obama and Trump administrations have backed the Saudi-led military intervention in Yemen. The United States continues to refuel coalition aircraft and provide intelligence data to assist those planes strike targets in that country. New information indicates that Washington has Special Forces on the ground to combat Iranian-backed Houthi rebels. Washington’s collusion with Saudi Arabia’s military campaign continues despite mounting evidence of the coalition’s repeated, systematic war crimes against civilians in Yemen.

Washington’s explanations for that collaboration range from weak to laughable. One justification is that Al Qaeda on the Arabian Peninsula (perhaps the most dangerous of AQ’s affiliates) is active in Yemen. But that explanation ignores the fact that the Houthis are vehemently opposed to the group. Scarcely better is the allegation that the Houthis are Iranian pawns who are to blame for Yemen’s instability and violence. The extent of Tehran’s backing actually is quite modest, and Riyadh’s meddling is far more extensive and disruptive. As in Syria, defeating the Houthis and consolidating the hold of a Saudi-backed Sunni regime in Yemen may serve the Kingdom’s interests, but that outcome does not benefit America’s interests or reputation. Collaborating in the commission of war crimes certainly does not do so.

Unfortunately, U.S. leaders seem inclined to blindly back Saudi Arabia whenever and whenever Riyadh’s rivalry with Tehran takes place. President Trump’s ongoing efforts to undermine the multilateral nuclear agreement with Iran appear to reflect the wishes of both Saudi Arabia and Israel. But sabotaging that accord creates needless tensions with Washington’s European allies and intensifies dangers throughout the Middle East. Worse, it increases the likelihood that Iran will acquire a nuclear arsenal, thereby likely leading to a U.S.-Iranian war. Such a conflict that removed Iran as a serious regional power would undoubtedly gladden the hearts of the Saudi royals, but it is hard to see how that destructive outcome benefits America.

For too many decades, the United States has adopted without much reflection policies that advanced Riyadh’s agenda when American interests were not at stake or even when they were undermined. Trump’s fawning behavior toward the Saudi rulers during his 2017 state visit to the Kingdom encapsulated Washington’s willingness to overlook or excuse Riyadh’s outrageous domestic and international behavior.

Despite the assertion that Saudi Arabia has been a loyal U.S. ally, the record indicates otherwise. The Saudi government funds the Wahhabi clergy that has spread a virulent, anti-Western brand of Islam throughout much of the Muslim world. Saudi-backed extremists have become cadres in terrorist organizations from Al Qaeda to ISIS. That fifteen of the nineteen hijackers on 9/11 were Saudi nationals is indicative of the problem that Riyadh’s sponsorship of Islamic extremism creates.

Saudi Arabia is a nasty, duplicitous power that pursues its own goals even when that pursuit imperils crucial American interests. President Trump needs to adopt a real America First policy in the Middle East—one that no longer allows the Saudi tail to wag the American dog.