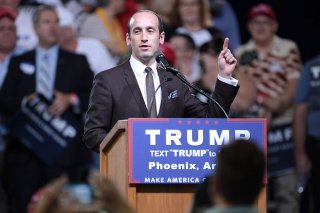 Miller is a talented speechwriter whose approach served Trump well during the campaign, when he wrote most of Trump’s fiery campaign speeches on the stump. But his zealousness may not always be serving Trump well now that he is president. Miller is among the major authors of the Trump administration’s most controversial and talked-about executive order on Muslim immigration and refugees—a directive that was so poorly conceived and rushed that top Republicans on Capitol Hill had no idea what the order said until Trump signed it at the Pentagon last week. According to Miller, however, the travel ban is “efficient, orderly, enormously successful.”

Such remarks suggest that Miller’s steely confidence is not quite matched by his understanding of actual policy. It’s one thing to try and carry out a president’s wishes. It’s another to turn them into an embarrassing caricature. It requires sophistication and judgment to exercise the discrimination that is needed when dealing with substantive policy issues that directly affect millions of people.

When he was a student at Duke University, Miller displayed courage in challenging conventional wisdom on issues like the Duke lacrosse players who were falsely accused of rape. Miller served on former Rep. Michele Bachmann’s staff before joining the staff of Sen. Jeff Sessions’s office. Those who worked with Miller described him as a fair but demanding boss who would freak out at a moment’s notice if something wasn’t up to par. One former congressional aide in Sessions’s office told Politico’s Julia Ioffe that Miller “goes from 0 to 100 with a snap of the fingers. He’s constantly seeing these conspiracies against him when someone’s probably just asking him a question.” Ruminating about what would happen if Miller had the kind of power that he now currently holds in the Trump White House, a former Republican leadership staffer only half-jokingly said he would be at risk of being sent to a camp for speaking to a reporter.

There are several examples in American history true believers able to climb up the ladder and whisper in the president’s ear. It never really works out well. Think of John Bolton, Paul Wolfowitz and John Yoo in the George W. Bush administration, Robert McNamara in the Kennedy and Johnson administrations, or H. R. Haldeman and John Mitchell in the Nixon administration—figures who are so confident about their intellect, experience and moral superiority that they become blinded to any alternative course of action.

With Wolfowitz and Bolton, we got the biggest mistake in U.S. foreign policy since Vietnam in the invasion of Iraq. With Yoo, we got legal viewpoints that were so extreme that the Geneva Conventions and the War Crimes Act were interpreted as options that could be stomped on rather than law that needed to be obeyed. And in the Nixon administration, his subordinates ran amok, destroying his presidency.

It’s still the early days of the Trump administration. Miller’s precise role isn’t entirely clear. But it would probably be wise for the administration to define it with a good deal of care.