The 1994 North Korea Crisis: Military Force a Bad Idea Then (and a Worse One Now) 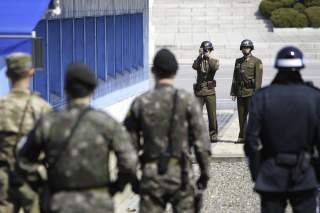 A sense of alarm is rising throughout East Asia as North Korea ramps up its ballistic missile and nuclear weapons programs. The failed missile launch on April 15 is just the latest evidence that Pyongyang is not backing away from pursuing those efforts. Kim Jong-un’s behavior crosses several red lines that the Trump administration and previous U.S. presidents had drawn. Since taking office, Secretary of State Rex Tillerson, National Security Advisor H. R. McMaster and President Donald Trump have emphasized that all options, including military force, are on the table to prevent North Korea from becoming a full-fledged ballistic missile and nuclear weapons power. To back up those threats, Washington, DC dispatched a carrier strike group to waters near the Korean Peninsula.

This is not the first time that American officials contemplated using military force to deal with Pyongyang’s disruptive behavior. In early 1994, Bill Clinton’s administration pondered that option as North Korea blocked international inspectors who were tasked with certifying Pyongyang’s adherence to the Nuclear Nonproliferation Treaty. There was growing evidence that the North Koreans were processing plutonium from a reactor at Yongbyon and had possibly extracted enough fissile material to build two bombs.

In his memoirs, Clinton described his administration’s reaction to those developments. “I was determined to prevent North Korea from developing a nuclear arsenal, even at the risk of war.” He had former Secretary of Defense William Perry convey that message in the strongest terms in comments to newspaper reporters and editors. Clinton added: “In order to make absolutely certain that the North Koreans knew we were serious, Perry continued the tough talk over the next three days, even saying we would not rule out a preemptive military strike.”

The administration was not making idle threats. Perry later confirmed that the administration seriously considered conducting “surgical strikes” against North Korea’s nuclear installations. The world was perilously close to witnessing another armed conflict on the Korean Peninsula.

Fortunately, such a tragedy was averted at the last minute. President Jimmy Carter contacted Clinton and indicated that he wanted to go to Pyongyang to try to resolve the growing nuclear issue. Clinton was hesitant to endorse such a mission, but after consulting Vice President Al Gore and members of the national security team he eventually told Carter that he “had no objection” to him going to North Korea so long as he conveyed a laundry list of U.S. demands to dictator Kim Il-sung. That was something less than an enthusiastic endorsement, but it was enough for Carter to negotiate provisions that became the basis for the Agreed Framework that froze North Korea’s plutonium program.

Clinton admitted that one reason he held back from approving air strikes was that he had received “a sobering estimate of the staggering losses both sides would suffer if war broke out.” One hopes that President Trump and his advisers appreciate the same dangers. There is little doubt that the United States could execute the necessary blows to take out North Korea’s nuclear and ballistic missile installations—at least the ones it knows about. But such a victory could come at a horrific human cost. The huge Seoul metropolitan area is located barely thirty miles from the Demilitarized Zone that separates the two Koreas. North Korea has thousands of artillery batteries within range of Seoul. U.S. airpower would undoubtedly eliminate some of those installations, but even multiple MOABs (Mother of All Bombs) could not destroy all of them. Only nuclear strikes might do that, but even President Trump probably is not reckless enough to adopt that option. Resorting to even tactical nuclear weapons would have monumentally negative implications for international order. Among other effects, it would fatally compromise what is left of global nuclear proliferation policy. Current or potential U.S. adversaries would have a powerful incentive to obtain a nuclear deterrent as quickly as possible.

Even without the prospect of a nuclear scenario, there are growing worries in East Asia that Washington may be serious about attacking North Korea. China, in particular, seems agitated about U.S. intentions. Beijing has cautioned both sides to exercise restraint, and Chinese officials have emphasized that no one would benefit from the outbreak of hostilities on the Korean Peninsula. In addition, there appears to have been an increase of troop movements in northeastern China, suggesting a hedging strategy in case Washington resorts to force. Among other problems, China has to worry about a massive flow of refugees from North Korea if a war occurs.

There is no easy solution to the problem that North Korea’s behavior poses. On other occasions, I have suggested that the United States incentivize China to become much more proactive to rein in its rogue ally. The incentives would have to be quite appealing for Beijing to incur the risks inherent in a more hardline strategy. In his summit meeting with Chinese president Xi Jinping, Trump made an initial offer—diluting his protectionist trade demands. But far more concessions likely would be needed in the security and economic arenas.

Another option would be for the United States to engage in serious talks with Pyongyang, perhaps even to conclude a “grand bargain.” The latter would require Washington to offer a peace treaty that formally ends the Korean War, gives diplomatic recognition to the North Korean government, allows for an exchange of ambassadors, ends annual military exercises with South Korean forces and lifts nearly all economic sanctions. In exchange, Pyongyang would have to relinquish its nuclear program and at least greatly limit its ballistic missile program.

Proposing such a bargain might end North Korea’s menacing behavior and give the regime a stake in maintaining the peace and stability of the East Asia region. Making that offer also would increase China’s incentive to get tough with Pyongyang if Kim’s regime spurned the offer. One of Beijing’s recurring complaints is that Washington refuses to negotiate seriously with North Korea.

It is entirely possible that such alternative policies might not work and that North Korea is hopelessly incorrigible. But almost anything is better than taking military action that could lead to a conflagration on the Korean Peninsula. The Clinton administration recognized the dangers and wisely backed away from the military option in 1994. The risks are at least as great today. One can only hope that President Trump acts as prudently as Clinton ultimately did.

Ted Galen Carpenter, a senior fellow in defense and foreign policy studies at the Cato Institute and a contributing editor at the National Interest, is the author or coauthor of ten books on international affairs, including The Korean Conundrum: America’s Troubled Relations with North and South Korea.