The Benghazi Report Misses the Real Scandal of Libya 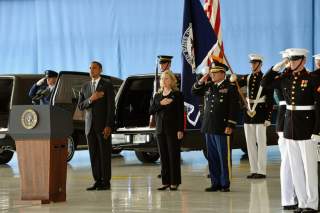 The much-anticipated report by the House Select Committee regarding the 2012 Benghazi incident in which U.S. ambassador to Libya Christopher Stevens and three other Americans were killed proved to be decidedly anti-climactic. Despite years of GOP partisan hype and the length of the report (some eight hundred pages), there was no “smoking gun” proving negligence on the part of Secretary of State Hillary Clinton or blatant deception on her part about the tragedy. The report, though, is a classic case of asking the wrong questions and, unsurprisingly, then getting meaningless answers.

What the committee members should have asked is what Ambassador Stevens and his staff were doing cavorting with Islamist militias in Benghazi in the first place. But that would have required a deep inquiry into an embarrassing fiasco of a Libya policy that many Republicans had also supported.

The Washington Examiner’s Tim Carney has it right when he contends that the real Benghazi scandal was “Obama’s drive-by war” in Libya to overthrow Muammar Qaddafi. More correctly, it was Hillary Clinton’s war, since she was the principal architect of and lobbyist for the U.S.-led NATO intervention against Qaddafi.

As he had since the beginning of his rule some four decades earlier, Qaddafi relied heavily on support from the tribes in the western part of the country (especially in the area around Tripoli) to help keep him in power. Tribes in the sparsely populated southern region were far less favorably inclined. And most important, tribes in the eastern portion of the country (especially near the city of Benghazi) were overwhelmingly hostile to Qaddafi. Indeed, rebellions in the east had broken out several times during his rule.

The Obama administration witnessed yet another eastern uprising. But U.S. and other Western officials did not see it (or at least did not profess to see it) as just the latest bloody manifestation of Libya’s tribal politics. Instead, in a process reminiscent of the preludes to the Balkan wars and the Iraq war, official analyses and media accounts increasingly portrayed the Libya struggle as a stark moral conflict. On one side was a vicious, murderous dictator, and on the other, rebels seeking greater freedom for their country and protection for civilians from the dictator’s security forces.

Lobbyists for a “humanitarian intervention,” both in key European members of NATO and in the United States, insisted that Qaddafi planned a military offensive against Benghazi that would culminate in a genocidal bloodbath. They twisted statements he had made, thereby “proving” that he intended the kill innocent civilians, not merely armed rebels that resisted his government’s authority. The most vocal proponent within the U.S. government of a military intervention for supposedly humanitarian purposes was Secretary of State Clinton, although she received crucial support for that position from both Samantha Power (a longtime advocate of the responsibility to protect doctrine) and UN Ambassador Susan Rice.

The enthusiasm for regime change might seem puzzling in retrospect, given that the brutally disillusioning experience of the Iraq intervention was still fresh. Yet the Obama administration seemed determined to repeat many of the same errors. Once again, the United States was about to lead an effort to overthrow the longtime secular dictator of a very fragile, somewhat artificial country. In both cases, policymakers seemed blissfully naive about what might follow. They especially underestimated the prospects for chaos. In both cases, the United States linked itself to insurgents with extremely murky ideological pedigrees. Secretary of Defense Leon Panetta, for example, sought to place the Libya insurgency within the context of the Arab Spring, even though it was far more violent. Instead of assessing those prospective clients soberly, U.S. officials deluded themselves into believing they were backing democrats of the desert. That assumption did not turn out well in Iraq, and it would not turn out well in Libya.

But the Obama administration’s diplomatic crusaders plunged ahead. They secured a resolution from the UN Security Council approving military action against Qaddafi’s forces explicitly to protect civilians. Indeed, that limitation was the only reason that Russia and China withheld their vetoes. But the “protect civilians” provision was nothing more than a cynical fig leaf. Almost immediately, U.S. and other NATO planes began to attack Qaddafi’s air defenses and other targets that posed no threat to civilians but had everything to do with which side would win the war.

When the insurgents, aided by the U.S.-led air and missile barrage, were able to topple Qaddafi’s government, U.S. officials believed that their policy had been vindicated. Even when rebel forces captured and executed Qaddafi in an especially gruesome fashion, Hillary Clinton responded with the flippant observation: “We came, we saw, he died.”

But Washington’s hopes for an orderly transition to democracy in Libya proved as illusory as they had been in Iraq. Within weeks after Qaddafi’s fall, the insurgents began to fragment, largely along tribal and regional lines. The western tribes started to coalesce around a power center in Tripoli, whereas the eastern tribes generally supported a rival faction headquartered in Benghazi. The southern portion of Libya was characterized by more generalized disorder.

Even worse, the now-empowered insurgents were selling weapons from Qaddafi’s armories. Those weapons were finding their way to questionable customers in already-nasty battle zones in places such as Chad, Nigeria and Syria. Despite having been the midwife to the birth of the “new” Libya, Washington proved either unable or unwilling to stem that destabilizing arms flow.

Instead of being allied with fledgling democrats, the United States now found itself in an increasingly uncomfortable association with tribal militias—many of which were decidedly Islamist in their orientation. The parallel with America’s sobering experience backing the Afghan mujahedeen two decades earlier should have given Obama administration officials more than a small sense of déjà vu. The perils of trying to cooperate with such factions became all too apparent in September 2012, when an extremist militia attacked the U.S. consulate in Benghazi, killing Ambassador Stevens and the three other American officials. With an extra dose of irony, according to the Benghazi report, the remaining Americans were rescued not by any of the “freedom fighters” Washington had supported, but by a remnant of Qaddafi loyalists.

The Select Committee report could have shed important light on all of these failings. Instead, the members opted for a very narrow, limited, and frankly boring partisan achievement.

Ted Galen Carpenter, a senior fellow at the Cato Institute and a contributing editor at The National Interest, is the author of 10 books and more than 600 articles on international affairs.