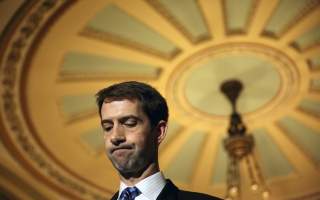 Last month, the Wall Street Journal’s Jason Willick suggested that Sen. Tom Cotton (R-AR) might be poised to rewrite the Republican Party’s foreign policy agenda. Given that he was once described as “his party’s most aggressive next-generation advocate for military action overseas,” he will likely drive war-weary voters—especially young voters—away from the party. Perhaps for good. In the meantime, rumors swirl that Cotton is in line to become the next CIA director, should Mike Pompeo move to the State Department, so it is important to understand his views.

Put simply, although the average American is skeptical of war, Cotton thrills hawks by arguing for the threat of force—or the use of force if threats fail. He advocates a tougher line toward Russia and China. And he seems generally dismissive of diplomacy and negotiations, especially with respect to Iran.

Cotton burst onto the national scene as a full-throated supporter of the Iraq War, quickly winning the attention of hawkish pundits. “While in Iraq,” The Atlantic’s Molly Ball reported, “Cotton...struck up a correspondence with [Weekly Standard editor William] Kristol.” When Cotton was later stationed in Washington, DC, “the two men met frequently over drinks and dinner.” The Weekly Standard ran a number of glowing profiles on Cotton, and, in 2014, Kristol’s Emergency Committee for Israel directed $960,000 to Cotton’s Senate campaign.

Another early fan was the Washington Post’s Jennifer Rubin. A profile in November 2012 described the congressman-elect as “no ordinary freshman.” “Cotton certainly advocates a strong U.S. presence in the world,” Rubin noted approvingly. “You may be tired of war,” he recalled saying during the campaign, “but war is not tired of you.”

Cotton seems alternately dismissive of the American people’s wishes, and confident that a skillful PR campaign can shift the public to support the same wars he does. “It’s important to remind the American people why we’re” so active around the world, he told Rubin.

An early and outspoken opponent of the nuclear deal with Iran, Cotton explained his preferred approach to negotiations, as reported by The New Yorker’s Jeffrey Toobin: “One thing I learned in the Army is that when your opponent is on his knees you drive him to the ground and choke him out.” In response, a questioner pointed out that killing a prisoner of war is not “American practice.” (It is, in fact, a war crime.)

Before an audience at the American Enterprise Institute in February 2017, Cotton scorned Obama’s willingness to wage war as too half-hearted. “He surged troops into Afghanistan—but not as many as his commanders requested and only with an explicit withdrawal date. He toppled the Gadhafi regime in Libya with neither a plan nor any interest to stabilize the country.”

There is no evidence that Cotton opposed U.S. intervention in the Libyan civil war in 2011, when a number of others, including many Republicans, did. I found no record of Cotton’s thoughts on Libya until after the September 2012 attack on the U.S. consulate in Benghazi that killed four Americans, including the U.S. ambassador Christopher Stevens. This attack, of course, occurred amidst the chaos and violence let loose by the intervention that removed Muammar el-Qaddafi from power. Cotton’s primary objection, in other words, seems to be that the United States didn’t have a plan for victory.

He has a similar critique of the U.S. approach toward the Syrian civil war. That the American people were overwhelmingly opposed to such an open-ended intervention, and have effectively overruled the bipartisan foreign policy elites in Washington who are determined to get more deeply involved in foreign tangles, rarely registers with Senator Cotton.

Similarly, tens of millions of Americans who once supported the Iraq War now believe that it was a horrible mistake, and not, as Cotton suggests, because the United States didn’t prosecute it aggressively enough. For Cotton, however, Iraq remains a “necessary, just and noble war.”

Nothing, it appears, can shake Senator Cotton’s confidence in the efficacy of military solutions for all of the world’s problems. The Cotton Doctrine will likely give us more wars, but less security.