The Days of Perpetual War Must End 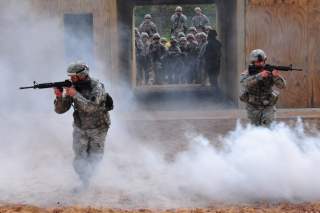 Since the tragic events of  September 11th, a core tenet of U.S. engagement with the rest of the world has been deploying military force against terrorists abroad and denying them territory from which to launch new attacks. Considerable data is now piling up that proves these nonstop military actions have not squelched the terrorist threat, but have increased risk to the United States. Flatly stated, evidence confirms the employment of lethal military power that we have relied on for the past fifteen years has failed to protect America. It is important that the creators and practitioners of U.S. foreign policy at the State Department and the White House do not merely cease these counterproductive actions, but discard the martial philosophy that spawns these actions and replace it with a superior product.

Many of America’s most senior and respected voices have been telling the public for years that our overseas wars have been waged to prevent terrorists from plotting attacks against the United States. For example, at a speech commemorating the tenth anniversary of the September 11th attacks, Ambassador Ryan Crocker said “Afghan soil must never again be used by elements that would use terror to attack the people of America, Afghanistan, or the international community.”

But we must ask the question: does it make sense for Washington to prevent the physical territory of Afghanistan from being used as a terrorist platform? Is there something special about the land in Afghanistan and Iraq that the United States must wage wars to prevent radicals from operating there? It doesn’t take much inspection to realize that such an objective could never actually be attained. Even if by some miracle, we did secure that one country at great cost, the United States would not be safer.

I was deployed to Afghanistan as an Army officer in 2011 at the height of the  surge in Afghanistan. I observed vast regions of Afghanistan where the Taliban was free to operate unhindered when there were about 140,000 NATO troops and over 300,000 Afghan National Security Force troops there. If the United States could not deny terrorists safe haven then, it is certainly a physical impossibility now that there are less than 10,000 troops there.

Moreover, whole sections of Pakistan are teeming with violent Islamic groups which the Pakistan military often does not disturb. Uzbekistan, Tajikistan, southern Russia, and throughout North Africa, violent extremism runs wild beyond the reach of local governments. It is self-evident that even if all terrorists were outright liquidated from the entire Middle East at enormous blood-and-treasure cost, but continued virtually unhindered in all those other safe havens, the threat to the United States would remain.

Moreover, it is telling to note that whatever plan may have been concocted in Afghanistan, the most important training and preparation for the September 11 attacks took place not in Kabul, Helmand or Kandahar, but in places like Germany, North Carolina, and Florida. Denying terrorists one plot of land merely pushes them elsewhere: owning physical territory does not protect American interests.

For the sake of our country’s security it is time to undertake a logical, rational course of action. The following five steps could begin the transition to and effective counterterrorism policy.

First: Stop the Bleeding: The first goal must be to do no more harm. The United States should immediately cease using military power to kill people we don’t like. Targeted killing, as many like to call it, has been thoroughly exposed as ineffective, and is sometimes counterproductive. It simply does not accomplish strategic objectives.

Other ongoing military operations must be examined carefully. It would be destabilizing to close down all military campaigns en masse. But each mission must be independently examined for utility, consideration for promises the U.S. government might already have made to friendly regimes, and the consequences of rapidly drawing down must be identified.

Second: The days of permanent war must end. The result of perpetual war is instability and continuous bleeding of U.S. troops and treasure. For our own self interest, we must open our eyes to a much broader set of solutions to problems and raise the bar substantially for resorting to war.

Third: Reboot the Mission in Afghanistan. The intent is to keep some troops to support the Afghan military and guarantee the security of the Kabul regime. Then we would explain that the United States cannot permanently provide another nation’s security. The result would be a five-year military commitment, and then over the course of two years reduce U.S. presence to only a diplomatic presence and security.

That way the Kabul government knows they’ve got five full years to prepare physically and mentally for taking over the security of their country. In addition, their forces have that lead time to make preparations to be responsible for their own security. What if they aren’t strong enough to stand on their own at the end of five years? The hard answer: that is something they’ll have to deal with, as America cannot permanently provide security for any nation.

Fourth: Reinforce Domestic Security. The primary reason the U.S. has not had a major terrorist attack on the order of 9/11 since 2001 has been the impressive work of the FBI, state, and local law enforcement officials working together to identify and prevent attacks from occurring. We should conduct an analysis of these cooperative efforts and maximize efficacy.

Fifth: Defend the Borders from Terrorist Infiltration. Another measure that will increase security for our country is to finally overcome the political roadblocks preventing immigration reform. There are many valid and difficult issues that need to be resolved, but the best way to prevent future attacks is to prevent terrorists from gaining entry to the US in the first place.

The default foreign policy mentality of using lethal military power to solve violence and instability overseas has been exposed as a near-total failure. While no strategy can guarantee success, there are common sense alternatives that offer a rational hope for success. It’s time to stop doing what we know doesn’t work and try something that has a chance.

Daniel L. Davis is a widely published analyst on national security and foreign policy. He retired as a Lt. Col. after 21 years in the US Army, including four combat deployments. He tweets at @DanielLDavis1. The views in these articles are those of the author alone and do not reflect the position of the US Government.